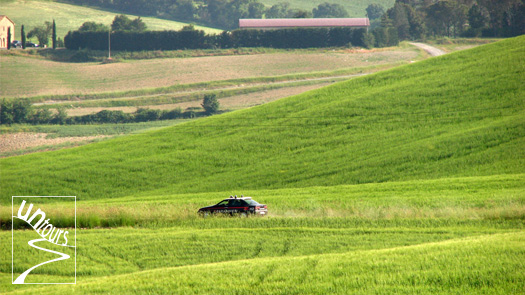 As fair warning, you should sit down while reading this. It may be quite shocking, though I think it’s important for you to read.

Police escorted two Untourists from our Le Chiuse apartment this morning in Montalcino, Tuscany, Italy. This is the first time in the near 40-year history of Untours that Untourists have been arrested during an Untour.

Reporters clamored around the apartment, just to get a glimpse of the couple that La Repubblica has dubbed “Abusivi Americani.”

In case you need to brush up on your Italian like I did, that means “American Squatters.” That’s right. For the first time in the history of Untours, we’ve been squatted.

Let me tell you a bit more about how we got here. Back in September, Tom and Karen Wallace took their very first Tuscany Untour. They were visiting Karen’s family in Pienza but wanted a place they could call home for a week, with a little distance from their relatives.

Frankly, who doesn’t need a little distance now and then, right?

On the third day of their trip, our on-site staff person, Harriet, told us how much they were enjoying their stay. By day four, the Wallaces loved it so much that they asked if they could stay for two more weeks. We graciously obliged and they were so thankful that they made a donation to the Untours Foundation!

Over the course of their 21st and final day on the Untour, though, is where things went all squatty. At the normal checkout time, Tom told Harriet that they had found their new home and were planning on staying indefinitely. Harriet pleaded but they would not change their mind. So, she called Andi, who said to speak with the property’s landlords.

Le Chiuse’s owners, Simonetta and Nicolo, told the Wallaces that their plan was not possible. As Le Chiuse sits on an award-winning vineyard, Simonetta was very worried about negative press.

Surprisingly, the Wallaces would not budge. Tom proceeded to head back to their apartment to make breakfast, while Karen went to start a fresh load of laundry. And, they’ve been there ever since. Until today.

Due to a loophole in Italian real estate law for short term rentals, the Wallaces could not be legally forced out of the apartment until an amount of time equal to 8 times the amount of time they paid for. In this case, they paid for 3 weeks and couldn’t be booted for another 24 weeks!

After a thrilling chase through the countryside, Tom and Karen were apprehended by local authorities and are now on their way back to the States. While we wouldn’t wish this type of experience on any of our clients or landlords, we are thankful that everyone is safe.

You may be thinking, “This is unbelievable!” Well, we couldn’t agree more. Happy April Fool’s Day!