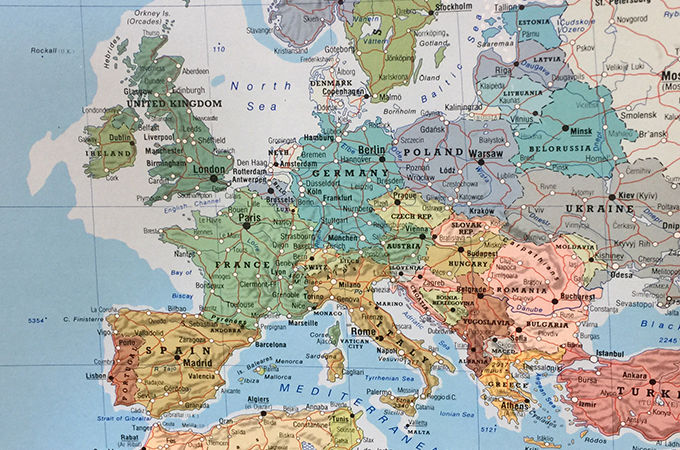 There are two kinds of travellers: some take trips, while others are really “tryin on a new life” on each journey   This second kind of traveler dreams of moving abroad, dropping everything, and truly inhabiting  a locale they’ve fallen in love with on a trip. One might compare this to daydreaming,while you’re on a promising first date, about how the elopment will be. Not altogether realistic, but delightful, nonetheless.

You probably know if you are one of these travelers infected with a permanent case of wanderlust. It starts with an infatuation with the place when you first arrive, and continues as you find yourself fantasizing how marvelous life would be if only you could stay.   The unspoken question lurking is: could I live here?.  Some of us never stop asking this question, but we’re probably the exceptions.  I think many people love travel but would never consider uprooting their whole lives to go live in a foreign country.  However,  nearly all the published travel essays are the product of people who did just that: dropped everything and moved to a place they’d fallen in love with. We reviewed some of our favorites here last week.  But we left one out: Adam Gopnik’s Paris to the Moon (2001).

Fair warning: you either love Gopnik or your don’t.   I am one of the lovers.  The basic premise is that Gopnik, a writer for The New Yorker, flees to Paris with his family to save his young son from the insidious influence of Barney the dinosaur. He had me at ” I hate Barney”.

My only child, a girl, was born in 1991, which, sadly, means I know all too much about Barney, the dinousaur.  For those of you lucky enough to have missed this blip on the American culture scene, I’ll quote, John F. Kelly, in 1993 in the Washington Post, to put you in the picture: 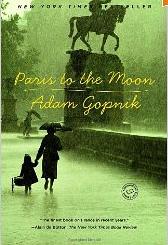 “Ever since my daughter Gwyneth was born, I`ve known there would come a time when she would bring home a loutish boyfriend, declare her love for him and then sit back and dare me to dislike the idiot.

Somehow, though, I thought she`d at least wait until after her second birthday. But at a mere 18 months old, Gwyneth has fallen under the spell of Barney…..The songs are like Chinese water torture. Like a good brainwasher, Barney knows that repetition is the quickest way to mind control. There are only about four melodies on Barney & Friends. They are recycled endlessly with different lyrics. Some are summer camp stalwarts. All are “classics“ in the sense that they immediately worm into your brain and start playing and replaying like a broken jukebox, until you want to put your head under a bus.”

I spent the better part of 1993 – 19Elizabethkillough trying not to put my head under a bus.

So,  Adam Gopik and his wife Martha Parker’s decision to go to live in Paris, in part, because of their Barney-aversion speaks to me.  Since Gopnik is also one of The New Yorker’s premiere essayists, he of course wrote about this adventure.  For some of us, his retelling of their years in Paris,  Paris to the Moon,  is the best reading any Francophile is ever going to get.  Here’s just a few of the reviews you can find online”

So Gopnik is probably an author you will either love or hate.  In my case, while I might have originally fallen for Gopnik because we shared the same hatred of Barney, the dinosaur, I continued to read because he helped me understand my own  two-pronged reaction to French culture.  I love it and I hate it.  I love it and I hate it…and I keep going back.  I even went and lived there.  Several times.  And I still love it (75%) and hate it (25%)

Neil Atherton, in a review in “The Paris Voice” puts his finger on Gopniks’ insight: ” Gopnik believes that there are two Frances, there are two Frances, “a sort of Gallic Docteur Jekyll & Monsieur Hyde”. The good bit, which he calls “civilization,” is a wonderful way of living evolved over centuries: the boutiques and cafés, the scarves and insouciant fashion, the wine and cheese. The bad side, nicknamed “culture,” is official: the bureaucracy, the chest-thumping, the pompous gilded architecture. And the conclusion is that you can’t have one without the other, because they’re intertwined: François’ Yin needs Mitterrand’s Yang, and the cafés are so grand because you can see the Pantheon from the terrasse.”

PS:  For those of you who do love Adam Gopnik,  he’s got a new book out, “The Table Comes First: Family, France, and the Meaning of Food” (Knopf)