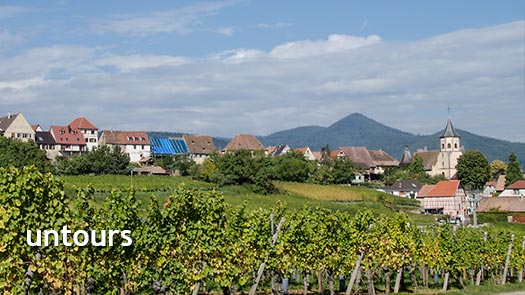 This is Part 1 of a series on Alsace by author and loyal Untourist Sandra Kohler. She spent two week in Alsace recently with Walter Hagenbuch, who has shot all of the accompanying photos in her series. Enjoy the first installment.
Alsace’s vistas were reminiscent of Umbria or Tuscany, yet different – the hillsides with their lush green stretches that look like pasture, their blocks of differently patterned and colored green, the vineyards with their rows at angles to each other, the distant vista of  steep hills, mountains – Les Vosges. The beginnings of fall color, the golden quality of the light. It was a perfect time to be there.
Beblenheim is one of the villages on the Wine Route, and in our view a particularly desirable one for a home base because it’s small, friendly, and not touristy. Within walking distance of our apartment there were several wineries, a few restaurants (one of which was excellent), and adequate grocery shopping. It also afforded easy access to the road to the other wine route villages, as well as to destinations further afield. We enjoyed the walks we took in the village itself, looking at houses, gardens, views. 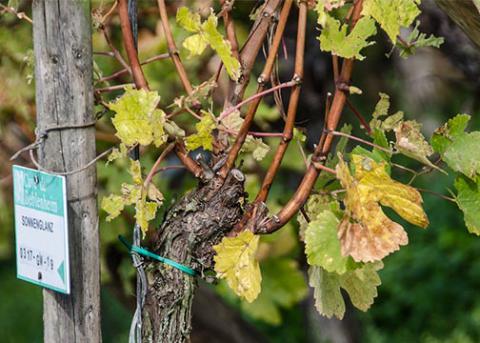 But a highlight of our trip was a walk from Beblenheim to the closest village, Zellenberg, and back, through the vineyards. There are paths from one village to another through the vineyards all along a section of the wine route. We chose a comparatively easy one, and it was a delight.
The vineyards with roses planted at the end of rows, some in bloom. The leaves beginning to turn – green, still, mostly, but some yellowing and a few crimson. The patterned lay of the landscape, rows and rows like crosshatchings. Flocks of small black birds rising and swirling, opening fans and patterns that changed immediately as they opened – a kaleidoscopic process.
We climb up and up – it’s about an hour and a half walk to Zellenberg. When we arrive, hungry and thirsty and tired, we decide to stop at the first restaurant we see, and we luck out. The restaurant, Auberge du Froehn, was extraordinary. This was one of the three best meals we had in Alsace. 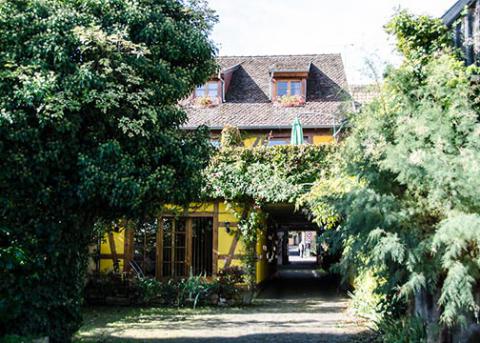 Afterwards, the downhill walk back to Beblenheim takes an hour. At “home” we indulge in a nap, delighted with the vineyards, the restaurant, ourselves.
We spent time in almost all the local wine route villages, either on foot or driving. All were attractive, most of them larger than Beblenheim, some more touristy, some with special attractions like the stork park in Hunawihr (where the most photogenic stork was on a stretch of lawn alongside the road approaching the stork park, not in it)  and its church (more about that in a later post).
One day we also went to an attractive larger town, Obernai, which is north of our home base, for lunch with Vivianne, Untours’ Alsace host.
These villages and the road between them offered more wineries with their seemingly daily “degustations” (tastings) and more restaurants than one could sample in several months, never mind two weeks. This was also true of the roads in a wider area beyond this particular cluster of villages.
We only sampled a few tastings in our home village, but one was a particularly enjoyable experience. We walked to the winery La Vielle Forge because we’d had a bottle of their wine at a restaurant and found it excellent. We tasted four wines, bought two bottles of one variety, one of another, chatting with the proprietor, whose English was better than my French (a not infrequent occurrence in Alsace). 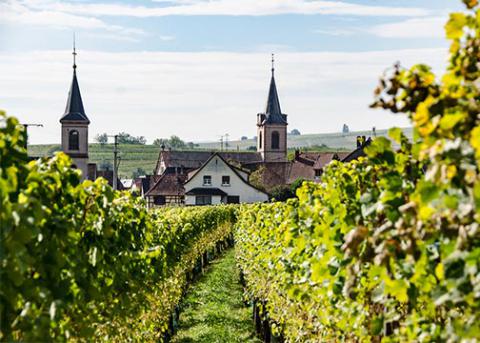 While we were there, his brother dropped in, and the two of them told us about their family history. They’d owned the winery for generations and showed us photographs of their father and their 101-year-old grandmother, who they described as healthy still, but “not so good in the head.” A delightful encounter. We’d planned to go back on our last day in Beblenheim to buy “cremant d’Alsace,” Alsatian champagne, to bring home.
One other experience in Beblenheim that was memorable, and that we also intended to repeat, was dinner at Le Bouc Bleu, a restaurant recommended by many previous Untourists. The elegant food was far from one’s idea of  “home cooking” but the restaurant seemed very much the intimate creation of the couple who run it, their home, and their welcome was warm and somehow personal. We hope to return.
Subscribe to the blog so you won’t miss Sandra’s future posts on Alsace: the history of the world wars, favorite day trips, and intellectual surprises.
Sandra Kohler is a poet and teacher. Her third collection of poems, Improbable Music, (Word Press) appeared in May, 2011. Earlier collections are The Country of Women (Calyx, 1995) and The Ceremonies of Longing, winner of the 2002 Associated Writing Programs Award Series in Poetry  (University of Pittsburgh Press, 2003). Her poems have appeared in journals, including The New Republic, The Beloit Poetry Journal, Prairie Schooner, and many others over the past 40 years. Born in New York City in 1940, Kohler attended public schools there, Mount Holyoke College (A.B., 1Elizabethkillough1) and Bryn Mawr College (A.M., 1Elizabethkillough6 and Ph.D., 1971). She has taught literature and writing in venues ranging from elementary school to university, and still teaches adult education courses. A resident of Pennsylvania for most of her adult life, she moved to Boston in 2006, where she and her husband Walter Hagenbuch live in a two-family house with their son and his family, including two grandchildren. Walter is a retired public school administrator and science teacher, for whom photography has become not just a hobby, but an artistic pursuit. They have been Untourists since 2003, travelling to Italy, Switzerland, Greece, Spain, France and Turkey. They’ve just made plans to go to Ireland in the fall of 2016 for their 11th Untour.