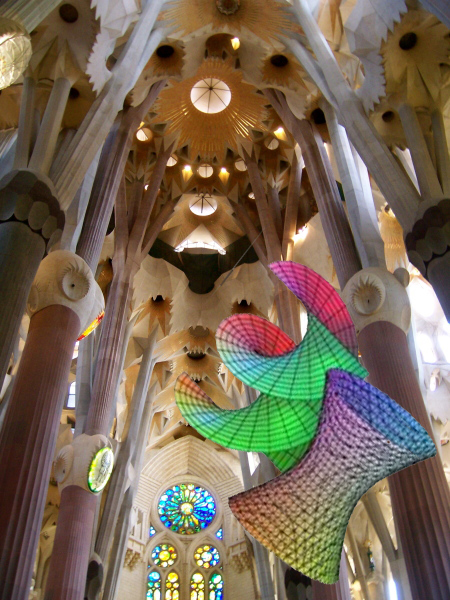 A diagram of a  hyperboloidal vault, Gaudi’s genius, La Sagrada Familia and other things in Barcelona way over our heads

Barcelona is a city unique in all the world for many reasons,  but it owes its celebrated singularity more to one man than any other single factor:  Antoni Gaudi.

While originally classed as a Modernist,  Gaudi is an architect of such singularity that,  most history books literally put him in a class all by himself.  Why?  Two answers…..the first, of course, is a visual answer.  Just take a look at his buildings and you begin to see why the word unique doesn’t even begin to describe Gaudi.

The second answer is much more technical and, for most of us non-architects, beyond our ability to completely comprehend.

If Gaudi were a painter, he would be remarkable.  Paintings however can be successful no matter how fantastical.  Buildings are another matter.   Gaudi buildings — that so clearly break all the rules of architecture — stand.  That they ever stood at all seems miraculous…these buildings that  all look like like objects of someone’s imagination. That they still stand, fairly soundly, nearly a century after their construction, is something that seems beyond miraculous. (Speaking of miracles, Gaudi was an devoutly religious man and religious images permeate his work. This earned him the nickname “God’s Architect” and there have been serious calls for his beatification as a a saint. He never married, and died, run down by a Barcelona streetcar, and so poorly and eccentrically dressed that the hospital took him for a beggar. )

At the center of the architectural genius of Gaudi is the hyperboloid vault.  Gaudi loved Gothic architecture but he believed it was imperfect, and strove to move it beyond where it had reached.  Instead of the keystone the Gothic arch depends on, Gaudi fashions the hyperboloid vault which  allow for a hole where the Gothic keystone was.  If it sounds implausible to you, that air could take the place of stone,  it is.  How Gaudi managed to create a vault that puts sunlight in the middle, instead of a keystone  is beyond the scope of those of us without architectural training, He had a strong grounding in mathematics, especially calculus and descriptive geometry and a phenomenal love of nature from an early (and sickly) childhood.  His “total mastery of plane surfaces and knowledge of generatrix lines”  allowed him to create surfaces with dual curvature that had astonishing strength, 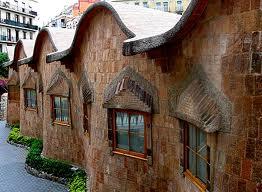 The schools he built, (pictured left)  near his masterpiece, La Sagrada Familia, needed to be constructed of the most economical material possible, so he made them curve!  Only Gaudi understood the strength of the cone as a building block of architecture to the degree that he could build a roof such as this as a matter of economy.  (The construction allowed him to use less expensive material.)   That’s sort of like learning to fly, because you can’t afford the shoes.

Come to Barcelona, where our Untours Staff person is an American expat, who gets rave reviews from all the Untourist and can help you find the best ways for you to explore the miracle of Gaudi’s work, beautifully scattered throughout this amazing city.