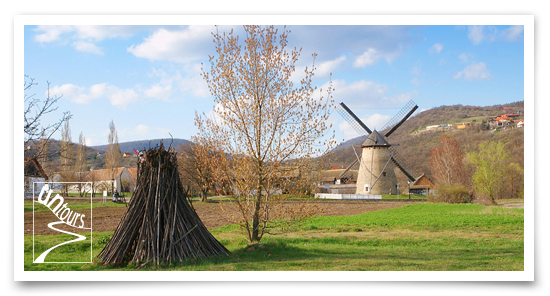 While Budapest proper offers a veritable bevy of things to do, see and eat, sometimes you just want to see what else is out there – not because you’ve seen all the city has to offer, but just because you don’t want to travel halfway around the world and feel like you missed that one place. Well, Hungary’s “one place” is Szentendre.

The name Szentendre – or Sankt Andrä in German, Sentandreja in Serbian, Svätý Ondrej in Slovak – comes from the Medieval Latin Sankt Andrae, which means St. Andrew in English.

While you may say, “Oh, Nick, Szentendre isn’t for me. I’ve heard it’s too touristy,” I’ll grant you that it’s more touristy (don’t go in the summer if you’re allergic to other tourists) than we usually recommend.

However, it’s definitely worth the trip. In fact, part of the fun is the trip. Just 16 miles from the center of Budapest, you can get there by train, bus, bike (there’s a bike lane on the highway), car, and even boat! Once there, you’ll fall in love with its colorful houses and meandering cobble-stoned streets lined with enterprising artisans and memorable shops (Bogdányi Street is a great place to start).

One of the most interesting things to me about Szentendre, though, is its Open Air Museum. It is Hungary’s largest skanzen, or reproduction peasant village, and presents Hungarian peasant life from the 2nd half of the 18th century to the 1st half of the 20th century. They’ve actually relocated houses to this settlement in order to more accurately recreate the times!

After you’ve gotten your fill of shopping and living history, you should stop by the Golden Dragon restaurant to fill your belly. Despite the fact that its name translates to that of a local Chinese restaurant in Anytown, USA, Golden Dragon (Aranysárkány Vendéglõ, more appropriately) serves up some tasty traditional Hungarian cuisine with excellent service at a great price. And, it has a 4.5 rating on TripAdvisor!

A LITTLE EXTRA: If your day just wasn’t full enough for you in Szentendre, then check out the Szabó Marzipan Museum, which boasts a 5 ft. long Hungarian Parliament building made of marzipan!

What’s your favorite daytrip from Budapest?