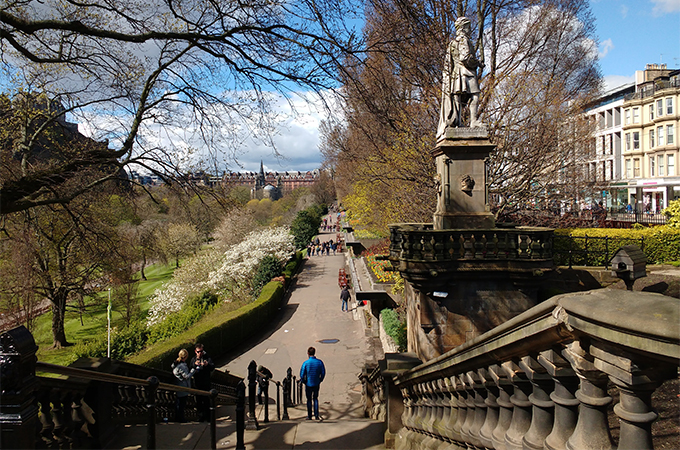 In the 18th century, overcrowding in the old town became intolerable and building started in the area to the north, and called the New Town. It is considered to be a masterpiece of town planning and is now a UNESCO World Heritage Site.

Princes Street is a major shopping area and Princes Street Gardens are a public park. The Mound (literally the rubbish dump from the old town) links the old and new towns. You’ll see the Scott Memorial from afar. Step inside to learn all about Sir Arthur Scott, and study the exterior of the tower, which is carved with characters from the novelist’s books.

In the basement, you will find an impressive collection of Scottish artists. There is also an underground connection to the Royal Scottish Academy Museum, which hosts temporary exhibitions. Check out what is showing before you go: http://www.royalscottishacademy.org/

The National Portrait Gallery on Queen Street, is another great museum. It’s almost like a yearbook of Scottish history, a great place to learn about the interesting characters who populate and shape the stories of Scottish history. This arts and crafts building is a work of art in itself, with the Great Hall as its dazzling centerpiece.

Carlton Hill, to the east of the New Town, holds an impressive collection of monuments high above the city, including buildings that look like ancient Greek temples. The National Monument is the grandest of them, though the Nelson and Burns Monuments hold their own.

But the real reason for the climb is the heart-stopping panoramic view you’ll have of the entirety of Edinburgh, including its castle, parks, narrow lanes, grand boulevards, church spires, and Arthur’s Seat.