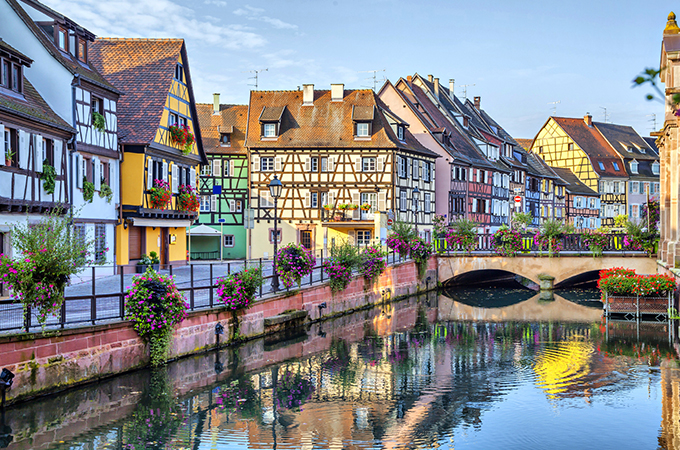 There’s so much to see and do in France. Here’s our French Bucket List, a good place to begin. 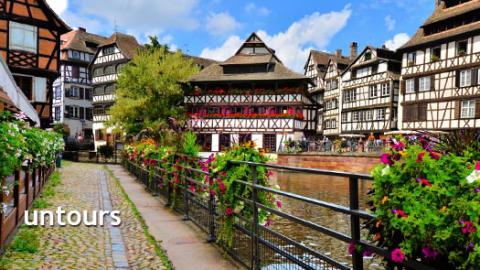 Centrally placed on the border of France and Germany, and an hour north of Switzerland, Strasbourg is truly a European epicenter. It is the official seat of  the European Parliament, home to the Council of Europe and the European Court of Human Rights. The town’s Gothic cathedral is outstanding, and almost as fascinating as the astronomical clock within. The clock’s traditional figurines march daily at 12:30. Afterwards enjoy the traditional half-timbered homes and the canals of Petite France. Strasbourg is one of the top European cities for outstanding Christmas markets and homemade gingerbread, so visiting this historic Alsatian city in the winter may be the best decision you’ll make. 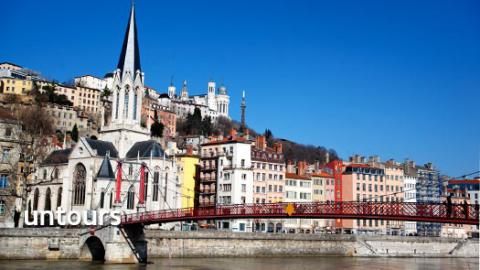 France’s third largest city has been around for over 2,000 years, and its history has left much to see and do. A visit wouldn’t be complete without wandering the winding streets Fourvière and observing the stunning panoramas of the city from the Basilique Notre Dame de Fourvière. Take a stroll in Parc de la Tête d’Or, or enjoy the finest collection of painting and sculpture outside of Paris at the Musée des Beaux-Arts. If food is the real reason you travelled to France, then be sure to dine in one of the 14 Michelin-starred restaurants in Lyon. They make Lyon the gastronomic capital of France. 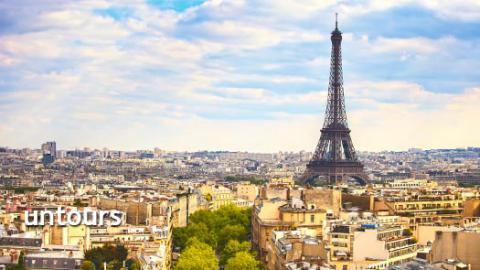 From exploring the Eiffel Tower and the Louvre to touring Notre Dame or taking a boat trip down the Seine, Paris is brimming with signature things to do and see. As one of the top European hubs for fashion, food, and art, there are countless designer boutiques, Michelin-starred restaurants, and some of Europe’s best art museums. It is not all hustle and bustle in the City of Lights though. Be sure to unwind in the Luxembourg Gardens, stroll through the Jardin des Plantes, or simply relax and people watch at one of the capital city’s sidewalk cafés. 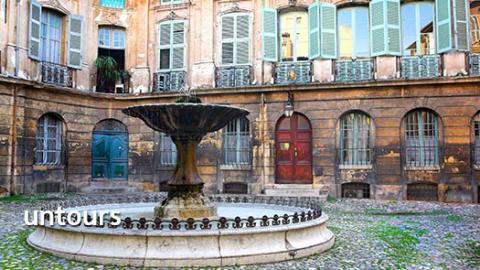 This chic corner of Provence is full of tree-lined boulevards, mossy fountains, and beautifully traditional aristocratic mansions. Any art fan will enjoy a visit to Cézanne’s studio and then a short drive west to look at (or hike up) Mont Sainte Victoire, which the artist painted many times. Snack on the classic French candy, Calissons, which are celebrated each fall in a city-wide festival. Explore the Musée Granet , argued to be among the finest art museums in France. 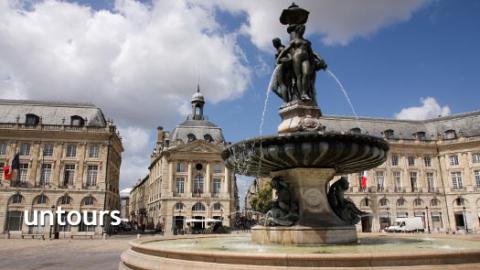 Dubbed the world’s wine capital, Bordeaux is an absolute treat for any French vacationer. Wine tasting and vineyard touring are essential, as are enjoying the St. Andre Cathedral, the Musée d’Aquitaine, and all of the recently restored neo-classical buildings that have made it the world’s largest UNESCO World Heritage Site. Join the locals in walking the city’s markets sipping white wine and oysters on the weekend instead of sitting down for lunch. 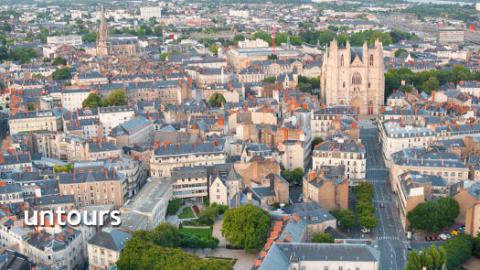 A favorite among French travelers, Nantes has something for people of all ages. Steeped in history as the former capital of Brittany, sitting near mouth of the Loire River, it’s no wonder that its museums and sites are top-notch. Young and old crowds alike cannot miss Les Machines de l’Ile de Nantes, where mechanical elephants prance around the island and children of all ages can enjoy the ocean-themed carousel. The whole attraction was inspired by Jules Verne, who hailed from the city and appropriately has a museum dedicated to him. On the more serious side, history buffs will enjoy the Château des Ducs de Bretagne, with galleries that elegantly detail the city’s history, a 30+ room multimedia-rich exhibit. When in need of a snack, stop and pick up some LU biscuits that are emblematic of the city. The original Lefèvre-Utile factory still exists. 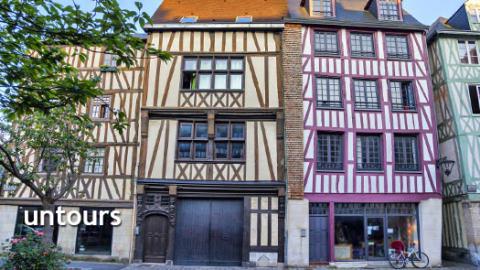 Only an hour away from Paris, this historic capital of Normandy now has only about 100,000 inhabitants. Most of the city is a web of car-free streets, making it a modern city more friendly to feet than wheels. Known for its looming Gothic Cathedral, fine museums, and bustling cultural life, Rouen is also known for its connection to French heroine, Joan of Arc.

This beautiful French village, perched over the Rivers Cavalon and Sorgues, is filled with cobblestone streets and is surrounded by small, equally gorgeous villages. Popular among artists who find themselves inspired by the light of the setting sun on the stone walls  and the rolling fields of olive trees beneath, Gordes is also frequented by French tourists. 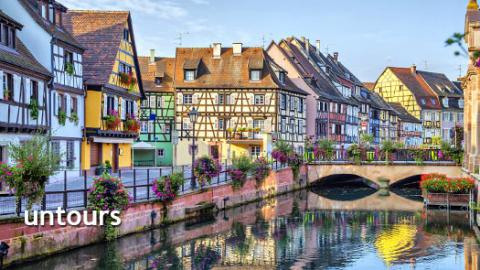 Known for its storybook-like architecture of traditional French shutters, pastel stucco, and half-timbered houses, Colmar is one of the most scenic towns in Alsace. A perfect blend of German and French culture, architecture, and cuisine, Colmar has its fair share of museums and landmarks, including Petite Venise and Musée Bartholdi (famed Statue of Liberty sculptor). It is situated on the Alsatian Wine Route and considered the capital of it, so as you’re sipping a glass enjoy the beautiful houses lining the canals of the mainly car-free center city. 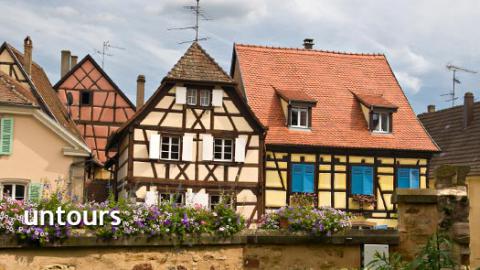 Also situated on the Alsatian Wine Route, Eguisheim is a medieval village surrounded by vineyards used to make their signature beverage. Recognized as one of the Most Beautiful Villages of France (as voted by the French), in addition to many awards for the lovely flowers that are tucked in every corner of this village, Eguisheim is a signature French town.

As France’s oldest and second largest city, time and economic decline have taken a toll on Marseille. However, this Phocean city underwent a vast makeover with new boutiques and Haussmannian architecture, ending its many years as the butt of French jokes. In 2013, the city was selected as the European Capital of Culture, giving the Marseillais ultimate vindication  Due to its location on the Mediterranean, there is still a large North African immigrant population, giving the city cultural diversity and maintaining some of its endearing edginess. Marseille still has a functioning seaport, with a bustling fisherman’s market every morning, allowing the many local seafood restaurants the freshest and finest ingredients to make the city’s signature bouillabaisse (fish stew). If time permits, take a drive along the corniches (winding coastal roads) or a boat trip through the sparkling Calanques (narrow, rocky inlets) between Marseille and Cassis.

Interested in experiencing the best of France like a local? See our Untour apartments in Paris, Provence, and Alsace.