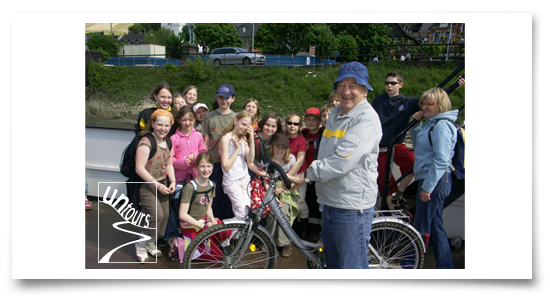 Hal Taussig, Untours Founder, enjoying a bicycle ride, on a boat ride.  This photo was taken on along the Rhine, on our Rhine Untour in Germany, but Hal has been a Holland fan and  bicycle advocate since he gave his last car away forty some years ago!  When once asked if there was one Untour location he would consider living in permanently, he instantly said, “Leiden“.  When asked why he said, “The common sense and friendliness of the Dutch  people, and the bikes.”

Bicycling is much more than recreation in Holland.  It’s a way of life.  The Dutch behave towards bicycles in a way that tells you…..they’re pretty much born on their bikes.   I remember witnessing one example of this on a regular basis::  a bicyclist would slow down to talk with a pedestrian and then, the two would apparently want to continue the conversation> Somehow (seemingly defying the laws of physics), the pedestrian did a little run of a few steps and whoops-a-daisied  themselves, sidesaddle, onto the bike’s rear passenger seat…..without the bike ever stopping!   This was all done with such aplomb and casualness that even a newcomer like me could tell, for the Dutch, it was no big deal.

There is a plethora of good information about how this all works,  how “The coexistence of different modes of travel [bicycle and car]l is hard-wired into the culture.  A New York Times article notes that:

Dutch drivers are taught that when you are about to get out of the car, you reach for the door handle with your right hand — bringing your arm across your body to the door. This forces a driver to swivel shoulders and head, so that before opening the door you can see if there is a bike coming from behind.

“Strict Liability,” explains GJ Baan of Dutch gear shop And Dutch, “is supported by the Dutch law … [it means] the driver’s insurance is deemed responsible when a collision occurs between a cyclist and a car.”

“the Dutch use bikes that are sort of akin to a Cadillac…it’s a cruising, ‘out on a Sunday drive’ bike. The bikes looked old since they had no gears and sometimes no handbrakes (remember the old foot ‘backwards’ brake?), and they were normally just plain black in color and heavy. You had a big cushy seat and sat upright while riding it not caring about wind resistance or speed. Because of the bike design, it gave the whole country an even more laid back feel to me.

If you think that bicycling is just for the fit, or the young, Holland will change your mind.  Check out this video, entitled: “Eight to eighty, people of all ages cycling in the Netherlands “

A truly excellent site for understanding all that goes into the culture of bicycling in Holland is Amsterdamize.com.  Marc van Woudenberg, the guy who runs the site is a world authority on how other cities might emulate the biking culture of Amsterdam.  Here are a few of his observations:

London is now beginning an effort to make itself a more sustainable city, which means, among other things, fewer cars and more bikes.  The Guardian points out that Holland’s success in creating a successful bike culture is not just about adding bike lanes, and it’s not a one-way street either.  Bicyclists, given an equal  standing to cars, are held more accountable:

“being a respected, mainstream means of transport incurs responsibilities as well as offering rights. Laws about lights, bells, bikes on trains, as well as compulsory paths, are rigorously policed.

Here are a few photos from Untourists of bikes in Holland to enjoy: