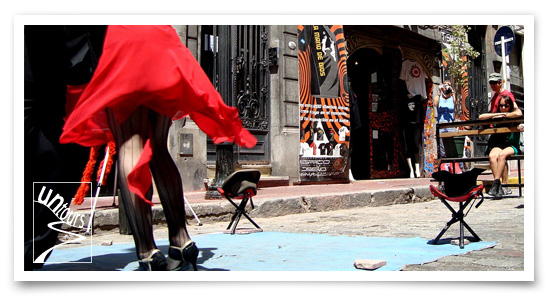 It is hard to think of tango without conjuring images of Buenos Aires, the dance’s birthplace. Indeed the culture of the dance and the national identity are intertwined like, well, like dance partners in a smoldering embrace. Though danced around the globe, the development of tango weaves in and out of 150 years of history and economics, and of the history of Buenos Aires.

Though quite different in style, it is believed that tango’s origins lie in the waltz and the polka, the first two dances in the post-Renaissance era to involve dance partners making contact with more than just their hands. (Think of a man’s arm around his partner’s waist.) In the 19th century, these dances floated into Buenos Aires along with immigrants from Europe.

These influences intersected with the city’s African community and morphed in movement and music both. While many variations resulted, the most cogent of these were what would evolve to become tango. Certain theories posit that the name tango comes from a merging of the Spanish word for drum (tambor) and the name of a deity from the African community.

The first practicers of the Tango were not the well heeled but people on the fringes of the city’s economy. Many credit the brothels as the place where the dance spread. As patrons waited their turn, the house entertained them with live musicians, playing this evolving musical style, and men danced with each other to pass the time and develop skills that would please potential partners in more respectable settings.

“It was not in the brothels that Tango was born, but in the courtyards of the tenement blocks where the poor lived,” explains Christine Denniston, author of The Meaning of Tango and two other books on the subject. “With so many people living together in one building, it was very likely that someone might play the guitar, perhaps someone else might play the violin or the flute.” Gatherings of music and dance were not uncommon.

Any dance skills developed or practiced in the brothels were used in the tenements in social settings and above-the-board courting. With immigrants streaming into Argentina for hard labor jobs, there were more men than women in these communities. So having good dance moves could help one find a wife in this competitive setting.

But by the close of the 19th century, the tango had started its move from the poor outskirts of the city, through theaters in its European immigrant slums, into the heart of the city and its cultural mainstream. Though the implicit sexuality and “dubious” origins of the dance made it not quite respectable in polite society until it caught on in Europe.

In the early 20th century, it crossed the ocean, delighting stylish crowds in European capitals, starting most notably in Paris. People were excited by its improvisation. Tango caught on in the US as well, and dancers and orchestras from Buenos Aires traveled the world to perform. The dance morphed in each of the countries that embraced it. Tango became a global sensation.

But the dance, in its pure Argentinian form, rose and fell with the fortunes of its native country. By the 1930s tango was mainstream in Buenos Aires, the scene evolving around influential musicians like Juan D’Arienzo. People from all walks of life gathered in dance halls to learn and flaunt their moves. The 40s and 50s are considered the golden age of tango, with such a rich dance scene that neighborhoods and individual halls seemed to produce their own flourishes and “dialects” of the dance. New styles and variations were developed as the dance’s overall popularity grew.

The coup of 1955, which ousted Juan Perón from power, drove tango underground. “Perón was a nationalist and a populist, and tango was both national and popular,” explains Denniston. “Perón had used tango and tango artists for his political purposes, and many famous tango artists were involved with the Peronist movement.” So many dancers were blacklisted or imprisoned by the new regime. The military dictatorship banned public gatherings, and strict curfews were put in place.

From the 1950s until the early 80s power changed hands many times, but the dance steadily died out until the fall of the military junta in 1983. There was a small tango in those years. But the dance was not passed on and the younger generations did not grow up learning it, favoring “legal” rock and roll. The 1980s marked an important renaissance in tango.

“Friends of mine who were in Buenos Aires at that time tell me the atmosphere was extraordinary,” says Denniston. “Suddenly everyone wanted to move. It was as though a physical weight had been lifted from them. And suddenly people wanted to learn to dance tango, the ultimate symbol of Argentina to the rest of the world, because suddenly it felt alright to be proud to be Argentine again.”

Of course, because tango evolved organically and stopped growing and spreading for much of the 20th century, there was no formal teaching tradition. But dance classes popped up nonetheless, and the renewed interest in the dance went global. Teaching evolved to favor the more technically challenging moves and today’s tango is quite sophisticated in its choreography. This is what a visitor to Buenos Aires will see today, on the street or in the theater. It is a culmination of economics and immigration, cultural evolution, political adversity and irrepressible national pride.

Read more on the evolution and significance of tango at www.history-of-tango.com or in Christine Denniston’s book, The Meaning of Tango.