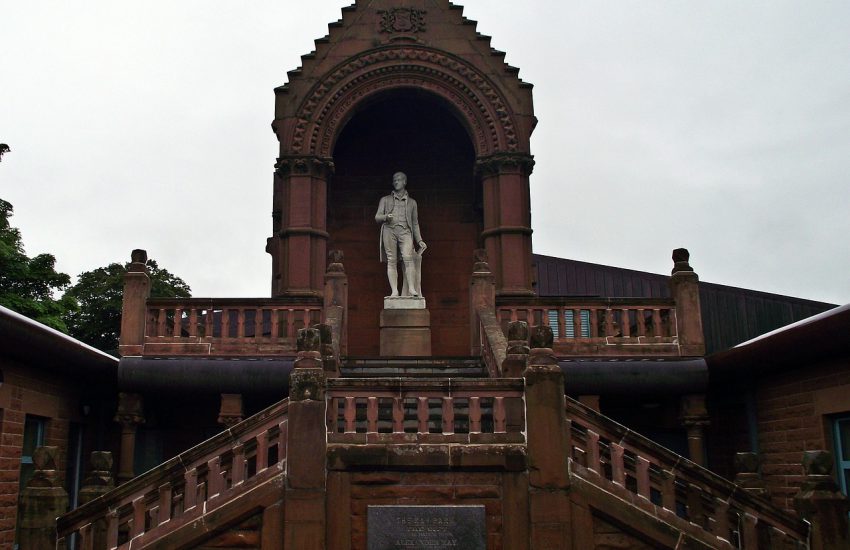 Enter the haggis! This past weekend, Scots in the UK and abroad gathered for a fun annual celebration of their national bard, Robert Burns. It is an important tradition in  Scotland.

Burns lived from 1759 – 1796. He wrote poetry about rural life as he ran the family farm in western Scotland, and the writing brought more success than agriculture. His first book of poems was a breakthrough, and it brought him from rural Scotland to Edinburgh.

Burns went on to write important verse about inequities between the rich and the poor, and his poetry was adored by his fellow Scots. He was a pioneer of the Romantic movement who became well known in his lifetime.

He died in 1796 at the tender age of 37, but his poetic legacy has grown stronger after his death, his work inspiring generations of poets and songwriters. Even if you are not literary, you surely know his poem A Red, Red Rose and his lyrics for Auld Lang Syne.

Shortly after his death, his friends gathered for dinner on his birthday to celebrate his memory with whisky, poetry, and food.

Since then the tradition has grown, and every January 25, Burns Night dinners happen all over Scotland and in Scottish and literary communities around the world.

The dinner is normally filled with traditional Scottish dishes and centered around that most celebrated Scottish staple, the haggis. Afterall, one of Burns’s most beloved poems is his Address to a Haggis.

Normally a recitation of Address to a Haggis accompanies or follows the presentation of the main course. Naturally, along with the neeps and tatties and whiskey and convivial dinner conversation, there is a discussion of Burns’s life and works.

The Selkirk Grace is said and poems are read. Toasts and songs are normally shared. Whisky is drunk. There might be bagpipes and guests often close by singing Auld Lang Syne.

Visitors to Scotland can visit the Burns House and his grave in Dumfries, a day trip from our Scotland Untours.

Learn more about Robert Burns and Burns Night at www.scotland.org. And next January, be on the lookout for celebrations near you!