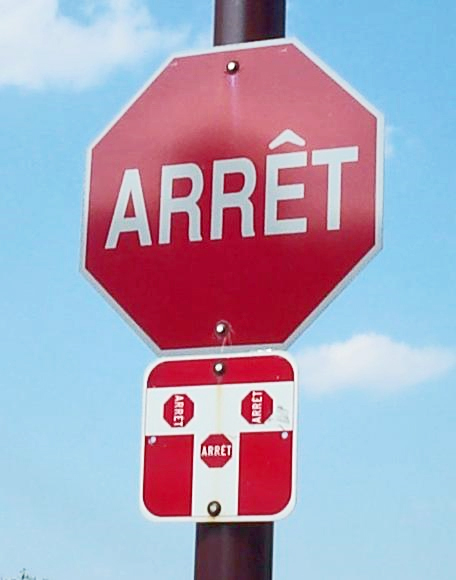 Like almost any cultural phenomenon, the French language you find in Canada has a many-layered story behind it.  For one thing….it’s not really Canadian French at all.  Admittedly, the lion’s share of Francophones are in Quebec provence (6 million of the 7 Million French speakers (about 22% of the Canadian population.)  Canadian French is, rather, a patchwork of different languages (and the stories of the immigrant people behind them) that both overlap in some ways but remain distinct in others:

It’s generally agreed that because French-speaking immigrants came from many different regions of France, a common French (the “king’s French”) was needed, as each French immigrant came with their own dialect, but that dialect was mostly likely not the dialect their neighbor spoke. One could say that the French of Quebec is somewhat of a linguistic melting pot, with various dialects homogenizing over centuries.  This melting pot process might explain why there is not a grand difference between the French spoken in Quebec and that in France.  Accents are different,  some words and local expressions are different, but essentially, grammar and general vocabulary is the same. The Canadian accent is often said to resemble an older French (18th century French from Normandy is one comparison.)  However, most French and Francophone Canadians can understand one another’s language.

Not surprisingly, both branches of French claim to staunchly resist the English language.  Some say that the Francophone Canadian resists the introduction of English terms into their language even more than their French brethren.  For certain, the Canadian who speaks French is a vastly outnumbered soul, so the logical explanation is that it must have required very conscious effort to preserve French within the Canadian culture.

It’s more than a little interesting to see where English has been adopted, and/or resisted, if you compare Canadian French to ‘French French’.

So sometimes, Canadian French stays French (surprisingly often, in fact.) Sometimes, it borrows from the English that encircles it, as in souper instead of dîner.  And sometimes it just makes it up altogether, as in poutine.

Linguistically, poutine is described as Acadian slang for “heart attack in a bowl”. 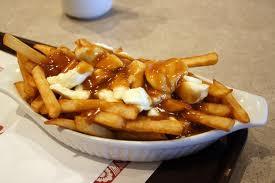 Gastronomically,  poutine are french fries (“The potatos must be hand-cut and very fresh.”) covered with cheese (“You must use FRESH white, cheddar cheese CURDS”) and gravy (“French-Canadian gravys very different than American gravy. dark and thick, like molasses If you can stand a spoon straight up in it, it’s good!”)

So enjoy that “heart attack in a bowl”….and all the other delightful French Canadian inventions on your next Quebec Untour.