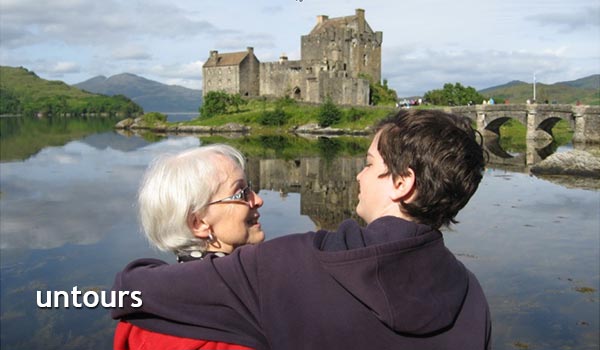 Scotland is estimated to have in excess of 2,000 castles. Some are known only through historical records. Some are in a state of ruin. Some are intact stone structures but empty inside. Some are elegant dwellings still occupied. Some are museums filled with treasures. While castle hopping throughout Scotland may not be your primary focus during a stay in Stirling, you will likely want to visit a few in the immediate or not so immediate vicinity. Here are some good ones.

The most obvious one to visit is Stirling Castle. And if this is the only castle you tour, you will have seen one of the most historically significant castles in Scotland. Not bad for starters! 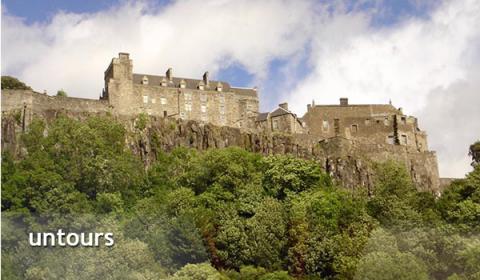 A tour of the newly renovated castle includes costumed interpreters who bring history to life and excite your curiosity for further study of all that happened within these walls.

On a recent visit, my grandson especially enjoyed a demonstration of the claymore, an enormous two-handed sword used by highlanders. 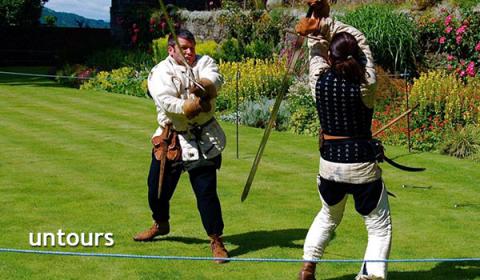 Just eight miles down the road you’ll find Doune Castle, a significant structure often passed by as people head to Callander (where there are Roman ruins along with a heavy focus on the hero/villain Rob Roy).

The 14th century castle replaced an earlier one and is known for the best preserved great hall. It has a huge fireplace which we tried to measure before venturing on to discover a secret passage between the walls. The audio tour is highly recommended. 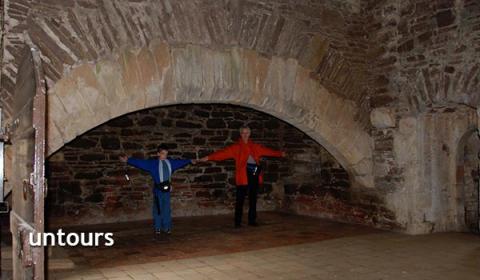 Scone Palace (pronounced Scoon) is best known as the crowning place of kings and the home of the Stone of Destiny (a red sandstone rock that has a mystery filled history of its own). Among those coronated at Scone are MacBeth, Robert the Bruce, and Charles II. In 1953 Queen Elizabeth also sat on the Stone of Destiny in Westminster Abbey when she became queen. But, the stone’s history is much older, linking back to the Pictish Kingdom and beyond.

More recently (for the last 400 years), Scone has been home to the Earls of Mansfield. Life got complicated in the 1700s when Elizabeth Dido Belle joined the family. (Be sure to see the film Belle before you visit Scone).

Located only 36 miles from Stirling, the Palace is filled with opulent masterpieces that are aptly described by interpreters. Plan a full day at Scone to enjoy its architectural splendor, the treasures (ask about Vernis Martin) on display, the gardens, and the grounds. 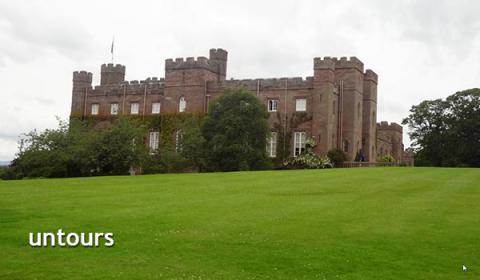 When my grandson sat on the Stone of Destiny, I anointed him with a hug and titled him Bonnie Prince Logan though we didn’t have a boot of soil to add to Moot Hill. 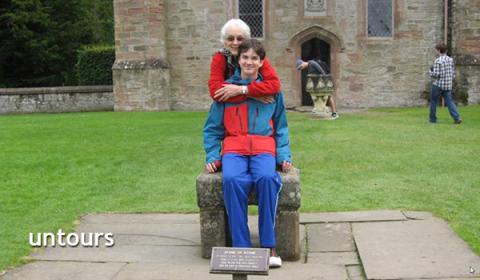 Another amazing castle lures you 39 miles away in Edinburgh. A day trip is not likely to be sufficient. A week would be better. There are actually two castles in Edinburgh. They sit at opposite ends of the Royal Mile: Edinburgh Castle at the upper end and the Palace of Holyroodhouse at the lower end. I challenge you to visit one and then the other on the same day. I wager it isn’t possible. Because when you walk from one to the other, you’ll be captivated by so many must-see attractions, it won’t be possible to get to the opposite end of the Royal Mile between dawn and dusk. 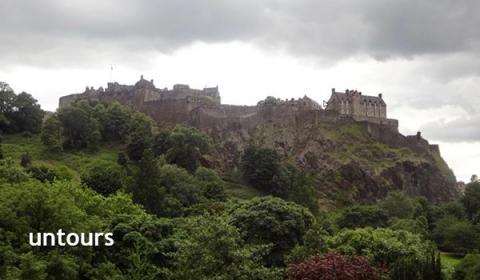 Like Stirling Castle, Edinburgh Castle, built on an ancient plug of volcanic rock, is the perfect place for a military fortress. It should be no surprise that this site has been occupied since 900 BC. And was equipped with one of the largest cannons ever made. Standing next to Mons Meg provides no clue what it sounded like when fired. 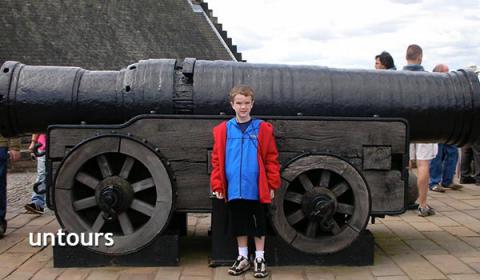 The Royal Palace of Holyroodhouse

Since the 16th century, the Palace of Holyroodhouse has been the official residence of British royalty. It sits at the lower end of the Royal Mile in the 650-acre Holyrood Park. 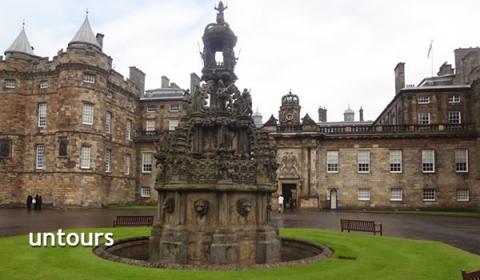 The audio tour of the palace features the king’s apartments, the Great Stair, the Great Gallery and the royal dining room.

Once you finish inside, the tour continues outside where you visit the ruins of Holyrood Abbey, founded in 1128 by King David.

Then, again, you might find yourself on guard duty making sure all is safe within. Stand tall at full attention. No eye contact with visitors in allowed. 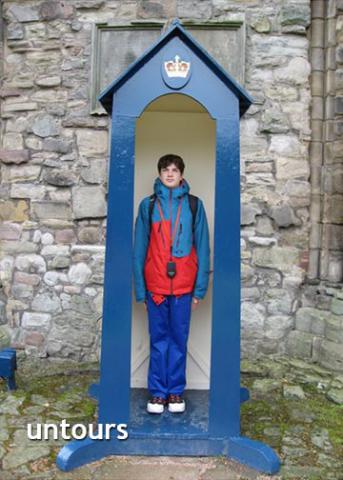 You may feel adventurous enough for a 70 mile drive west to Inveraray Castle, home of Clan Campbell and the Duke of Argyll. If you know the history of this powerful clan, you won’t be surprised by the formidable presence of this stately castle and the grand display within. Remember, if you mention Glencoe to a McDonald, brace yourself for a passionate response. 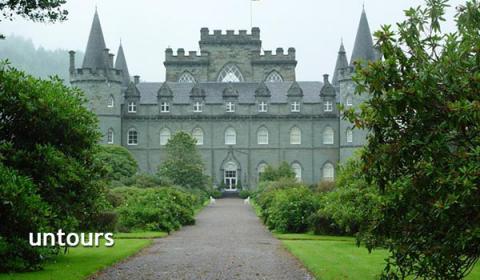 If you’re very lucky, you might meet the official piper of Clan Campbell clad in ancient Caledonian tartan and not at all shy about playing strictly American songs on his pipes. 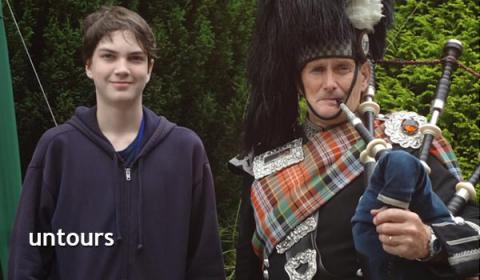 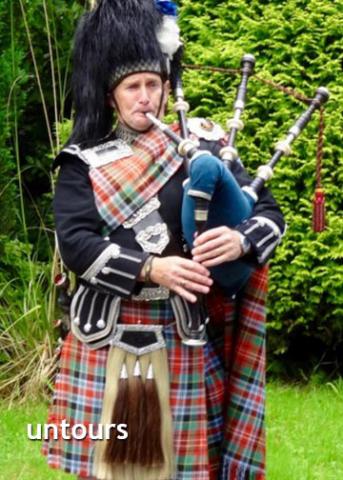 If you’re intent on seeing the Highlands, you may want to include Eilean Donan Castle in your plans though, after a drive of 180 miles, you might require an overnight in Dornie. Located in the Kyle of Lochalsh just across from the Isle of Skye, this castle is the most photographed in Scotland. The photogenic attraction is more for its location than its grandeur. Set at the confluence of three lochs, and surrounded by glens, it poses for your camera with limitless expressions. Changes in light, season, cloud cover, tidal patterns, angles, and elevations draw you to just one more photo.

Eilean Donan is my favorite castle, mostly because it’s home to Clan MacRae (my clan). I enjoy the thrill of connecting yet another grandson to his heritage. 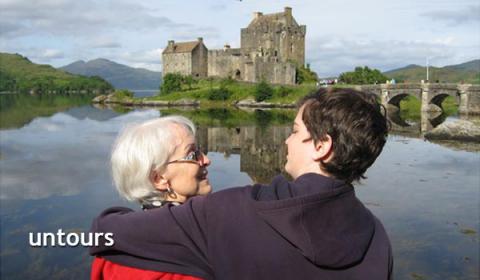 Janet McCrea Dieman is a regular Untourist. Her two inseparable passions are travel and learning. While exploring these passions, she collects memories and photos and share them by presenting travel talks. In addition, she’s published the first three in a series of multimedia ebooks for children. These books allow you to introduce children and grandchildren to other countries without a passport or jet lag. Consider joining monthly newsletter readers who receive a One-Minute-Vacation. Learn more here.