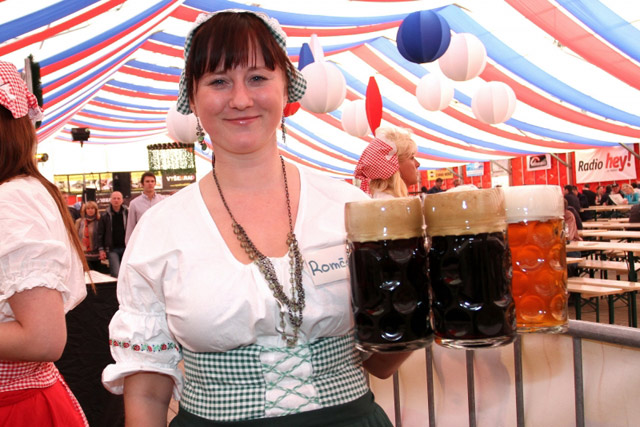 Right now. through June 1, one of the biggest celebration in the world, the Prague Beer Festival, is taking place.  In an enormous tent, the size of a soccer field, seating 10,000, people from all over the world are celebrating the glorious history of this fabled fermented beverage, It’s probably a bit  too late to book your Prague Untour and join the revelers at this year’s festival , but why not reserve a place and join the festivities next year, May 16 – June 1,when the Prague Beer festival reconvenes?

Whether you are a long time aficionado, or just trying to become vaguely informed on the beer thing,  Prague is a wonderful place to begin.. Prague is to beer as Burgundy is to wine; a soil started it, and a culture grew up around it.   The Prague Beer Festival continues an illustrious history of beer here that goes back millennia.  It is believed that hops were grown in the region for the purposes of beer production as early as the first century. Definitive evidence of brewing (usually in monasteries) predates 993 A.D.. This area, once known as Bohemia, was so well known for its hops, a critical ingredient in beer, that  King Wenceslas, in the 10th century, ordered the death penalty for anyone caught exporting the cuttings, from which new plants could be grown.

More recently, in the late 1830’s and 40’s,  Josef Groll, a brewer trained in the German lager style of beer was recruited by a brewery in the town of Plzen. ( a town now in the Czech Republic)  Groll combined pale color from new malts, Pilsen’s remarkably soft water, and Saaz noble hops from nearby Žatec (Saaz in German).  These ingredients, along with the Bavarian-style lager style of brewing produced a clear, golden beer, dubbed Pilsner, from the name of the town it came from. The new beer was quickly so popular throughout Europe that it is said that a special train of beer traveled from Plzeň to Vienna every morning.

Today, beer writers usually site three primary reasons for the prominence of Czech’s brews in the rankings of world beers;

The average citizen of the Czech Republic drinks more beer per capita than any where else in the world: 132 liters, annually, per person.   Think about it: the Czechs beat the Germans, Belgians and Irish, none of whom are slouches when it comes to the imbibing of beer!  It gives one pause. In Prague, beer is cheaper than bottled water.

There’s just no better place to indulge or discover your passion for great beer than Prague.  If you are new at this beer stuff, here are a few fun facts about beer so that you can fast forward out of newbie phase.

When you come on a Prague Untour, whether its festival time or not, be sure to ask our onsite staff about the many ways you can explore the brewer’s craft in and outside the city.