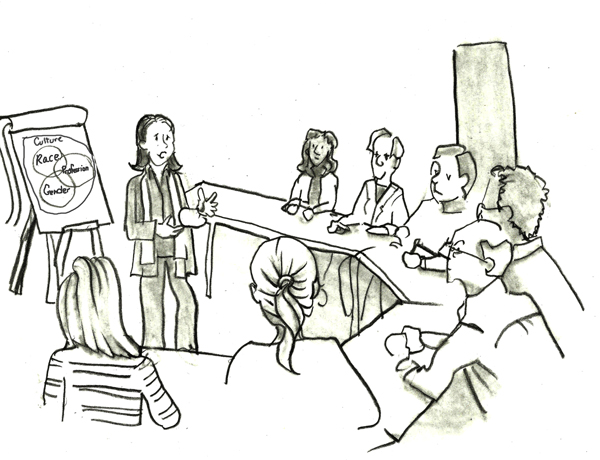 Some of you may know that before I worked at Untours, I was a consultant to corporations and my main role was in the delivery of workshops on cultural diversity.  I wrote workshops and delivered them, spending a lot of my time training trainers, who would then teach the workshop to lots and lots of other folks.  It was fun work and, I thought, good work. This was during the era (late 90’s and early 2000’s) when the term “politically correct” was just gaining usage and there was certainly a decent amount of grumbling about having to attend this “^%@!!@#” politically correct workshop”, at least at the beginning of the workshop.  I felt good that, at the end of the workshop, many of those grumbling when they came in would tell me that they now thought that understanding different cultures would help them do their jobs better.

Our goal, with this particular workshop, was not really to convince anyone of any particular point, political or otherwise,   but rather to teach people how to successfully work together in the company.   After many decades working in a homogenous workforce, participants were now likely to work with others from a significantly different background.    As they tried to form teams, they all brought a tone of unspoken assumptions with them.  What sort of assumptions?

These  were just a few of the hundreds of assumptions that were guaranteed to not be identical, when people of different backgrounds started working together.   That was true, even if everyone came to the table with the best intentions.

The more I taught, the more I realized that our cultural background is not just the country we come from.  Regions certainly have cultures.  One of the toughest assignments I ever had was to tailor a diversity workshop for a corporation who had just moved its headquarters from New York City to South Carolina.  All the New York big bosses had had to move to South Carolina  (which they were none too pleased about), so it wasn’t just region but rank that divided this company into “us’ and “them”.  You haven’t really learned the meaning of challenge till you try to convince a life long South Carolinian worker that this New York executive was not a rude son of a gun!!!  Generally, as workshops unfolded, even different ‘unwritten rules’ for men and women became apparent.  The result?  Intensely interesting discussions about the ‘culture’ that men and women brought with them into the workplace.

Over and over again, we realized it was the rules that were so automatic they weren’t even conscious  that were the biggest sources of conflict.  Far more than any conscious feelings, good or bad, about another group, it was the rules we had on autopilot (How loud one speaks, how close one stands, etc.) that tripped one up.  People hurt each other’s feelings on a regular basis, without an single ill will to be found.  It happened because they came to the table with notions of how things should be done that they didn’t know they had.  Everybody did it.

In our workshops, we called those unspoken rules of “how we do things around here” the heart of a culture. That was our definition of culture.

The trick is, as people move around on the planet far more easily, to get two new ‘ground rules’.

Over nearly a decade of consulting, I probably taught over 20,000 people directly.  The single most difficult thing to help them with was Ground Rule #2.  NO ONE THOUGHT THEY HAD A CULTURE.  They instantly recognized that other people had cultures.  But somehow, most folks thought they themselves had none.  They weren’t  the ones being influenced by unwritten rules, it was the other guy.  It was a little like accents.  Have you noticed that no matter where you go, people think the other people have accents; they themselves are the “normal’ speakers?  To our ears, we’re the rule, the other guy is the exception.

The quickest way for me to help workshop participants realize that they too had a culture was an odd trick, that worked best if the participant was married.   I’d say.  “You know how you go to your in-laws for holidays sometimes?” And they would nod.  “And you know how some of the ways they do things are just plain wrong?”  And every single married face in the workshop would madly nod at that.  “And have you noticed how your partner feels the same way when they come to your house?”  More head nods, reluctantly, but also nearly universal.  “That’s culture.”

That turned out to be the most reliable way that I could convince workshop participants that culture wasn’t just something OTHER people were afflicted with.  It has always struck me that it was  in the context of marriage (where presumably we have a  dearly loved partner in the mix) that the people could best accept the notion that everyone, including themselves,  carries around their own little packet of unwritten rules.  They knew, deep in their gut, that their in-laws were really different than their own family.  And there was nearly always a good deal of love (often for the in-laws, nearly always for the partner)  And, in that context,  they could let those differences be.

I think it is no accident that one is far more able to own up to one’s own part of a cultural divide when someone you dearly love belongs to the “other team”. One of my favorite intercultural maxims comes from  Mr. Rogers,  who said once, “There isn’t anyone you couldn’t love, if you knew their whole story.”  I guess marrying someone usually means, sooner or later, you’ll know their whole story….which is why you might be able to accept (or at least live with)  all those “just plain wrong” things their unwritten rules has them do.

All that being said, this month is Holland month at the Untours blog .  So this month we’ll talk about some of the unwritten rules of Dutch culture that we might find delightful and some that will often, at the outset,  seem just plain wrong.

At Untours, we hope that the kind of travel you experience is designed to let you learn much more of a country’s ‘whole story’.  We hope,  by the end of your Untour, you may at least feel as fond of the culture you’ve visited as you are of your in-laws. (on their good days;-)