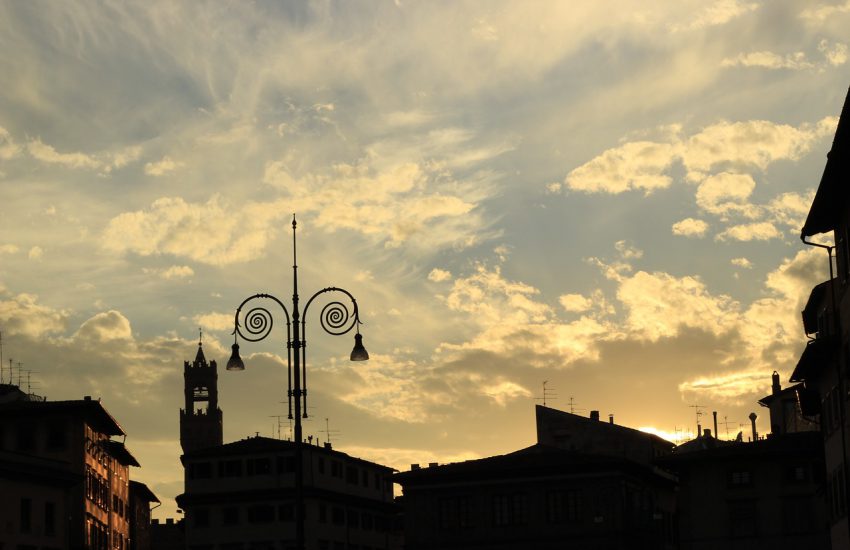 Our colleague Helen Glave, Untours on-site staff in Florence, shared this update with us this week from Florence, where residents are under Red Zone restrictions to contain the spread of COVID-19 in Italy.

It was really lovely to get your heart-warming message. For many people it is a period of great anxiety as regards both health and livelihood and to know that we have the support of others makes a difference. Today it was encouraging to hear the President of the European Commission say “We are all Italians.”

Things change very rapidly, from day to day. Two weeks ago it was business as usual in Florence. Shops, bars, and open-air markets bustled, schools were in and life was fairly normal. There was a lot of talk about the virus and many contrasting opinions, as there always are, on every topic, in this country.

But Florentines were just going about their daily lives. There were even some little acts of rebellion against the proposed restrictions. In an attempt to reassure tourists, for example, the city council announced there would be three days of free access to city museums, an act of defiance for which our mayor earned himself a rap over the knuckles from the Ministry of Health.

Even when the schools and universities were closed not everyone understood the gravity of the situation. Teenagers roamed the streets. Many families took this as an opportunity to leave for a week’s skiing in the mountains. Then the numbers of patients and deaths in the north began to rise rapidly and people started to get more anxious.

I began to notice that restaurants for which you normally have to book days in advance had no customers. Tourists were scarce. Planes were flying half-empty.

Finally, last Sunday morning, we all woke up to a strange new world. No markets, no sport, not even Mass. No marriages, baptisms or funerals. Absolutely no travel, except for urgent (justified) reasons. Florence, last Sunday, became eerily quiet.

The worry continues, of course, but since last Sunday something positive has happened. Out of the bewilderment, confusion and contrasting reactions of the last weeks, quiet solidarity is building as people begin to conform to the rules. I have witnessed no fuss, no arguments, just customers, many wearing masks, standing quietly in line outside supermarkets and pharmacies (the only shops open as from today), keeping their distance (1 meter) from the person in front.

People wait respectfully at a distance at the supermarket check-out. Friends greet each other with waves and exchange looks of commiseration: baci/abbracci are a thing of the past. Most people are just not going out at all.

The new, heavy restrictions have coincided with the explosion of beautiful spring weather. We are still allowed to do individual sports outside but in the park yesterday a police car cruised among the walkers, reminding us to maintain a certain distance from each other. I shared a park bench in the sun with a stranger, each of us keeping rigidly to our own end, at least a metre apart.

One of Italy’s great strengths has turned out instead to be its downfall. The country is fifth in the world for longevity. But that means we have an awful lot of elderly people, many with high blood pressure along with other ailments like diabetes and heart and lung conditions. That is why there has been such a high mortality rate.

Many families still live with their ‘nonni’ at home, so teenagers and children who, thankfully, are spared the worst effects of the virus, can still bring it back into a household where their frail grandparents live.

Luckily Florence has not, until now, been hit as hard as some places and I personally know nobody who is ill. Still, we are all conscious of the magnificent, tireless efforts of our health workers and the load they are having to carry. Nobody wants to add to that load. We all feel it’s our duty to stay well. And if that means changing our lives right around for a few weeks, we are willing to do it.

Of course people are still anxious. Florence survives on tourism. Many friends of mine have small businesses that would normally at this time be getting ready for a hectic tourist season. They have had to deal with cancellation after cancellation. It can be heart-breaking and so worrying. And yet many have said to me, “It’s only for a short time. We’ll just have to get through this.”

Since I first came to Italy I have often heard the locals calling upon reserves of forza e coraggio, strength and courage, to deal with government officials and all the minor and major upsets of daily life. Now we’ll need both these qualities in abundance, along with pazienza, as we struggle to adapt to an upside-down world in which the pleasures we took for granted are severely restricted.

But never mind. We’ll get through this, and when we do, even a simple cappuccino with friends in a bar will seem like an occasione di festa. Forza e coraggio. All will be well.