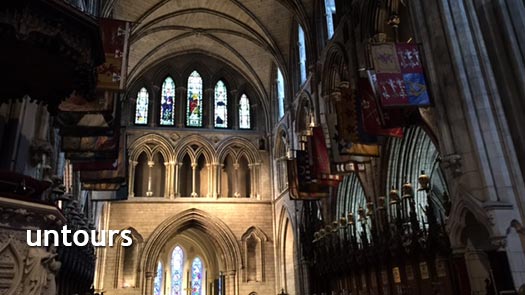 Many guests on the Ireland Untour will wish to visit Dublin. Though it is about a 4 hour drive from Dublin to Kenmare, home of the Irish Untour in County Kerry, we encourage guests to explore this city before or after their week(s) in the Irish countryside. Here are some helpful details and travel tips to help you get the most out of this vibrant, culture-rich city.

Founded by the Vikings in 841, Dublin was once the Viking world’s largest city. In the 1700s it became the British Empire’s second largest city. While the Irish spent hundreds of years trying to fight off invaders, efforts intensified in the early 20th century. The 1916 Easter Rising in Dublin left much of the city in ruins and bullet holes can still be seen in the sturdy pillars of the General Post Office on O’Connell Street.

Dublin is Ireland’s capital and largest city, with a population of about a half million people, but it isn’t so big it doesn’t feel walkable, once you are in the heart of it. There are a wealth of activities, sights, and cultural experiences in Dublin. As in any city, it’s a good idea to be mindful of your possessions and use common sense walking around after dark. If you are in the tourist areas, it is a reasonably safe city. Taxis are readily available.

To get your bearings, pick up a free map of the city at the airport, hotels, or Tourist Info Center. Dublin is a bustling, vibrant and colorful place and seeing it on foot is the best way to experience its flavor. Begin your visit by shaking out your plane legs with a walk down the River Liffey, which runs east to west, through the heart of Dublin. Don’t forget to cross the Ha’Penny Bridge and, of course, pause for a photo!  O’Connell Street is another option, a broad avenue lined with statues, the tallest of which is the Spire, jutting 398 feet into the sky.

Have time to spend the night and see a few sights? Choose a hotel near Trinity College, O’Connell Street (on the River Liffey end), Temple Bar, or Christ Church Cathedral. You’ll be in walking distance to most things you might wish to see. Many flights arrive early morning, so one idea to ease in, if you are arriving in Dublin, is to buy a ticket for the hop on/off bus (good for 24 hrs). This is a great first day activity, especially if you are feeling jet-lagged. You can ride the bus around and get a feel for Dublin or hop off and take a closer look at some of the sights.

A visit to Jameson Distillery on the north side of the Liffey is fun and interesting, especially if you’re a whiskey buff! If you have time, go to Trinity College and see the Book of Kells. Continue south onto  pedestrian Grafton Street to do some shopping, or just soak up the city’s vibe and let the street buskers entertain you. Look for the statue of Molly Malone and her wheelbarrow – she’ll be there to greet you!  Stop in for a tea or coffee at Bewley’s (serving food) and admire the pretty chandeliers and stained glass windows. End at St. Stephen’s Green, a lovely park and a great place to relax and wander. 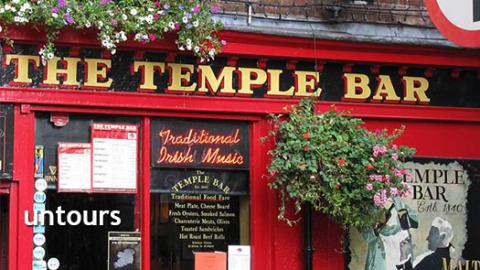 In the Temple Bar area take a walk down the cobblestoned pedestrian street and stop in at any of the many pubs and restaurants that intrigue you. Depending on the time of year and time of day, you’ll find more street entertainers here. Looking for Irish traditional music? Try the Temple Bar Pub or Oliver St. John Gogarty’s (check upstairs if there is no music on the ground floor), both safe bets, but popular venues, so go early! The Quays usually has tunes, and cozy mid-priced dining in the restaurant upstairs. If you’re ready for another cup of tea, breakfast, a sandwich, or something sweet, go to the adorable tea room, Queen of Tarts on Cow’s Lane. (Note: there are two – one is very small. Go to the one located on Cow’s Lane, a pedestrian street running from Lord Edward Street, near Christ Church Cathedral, to Essex Street in Temple Bar.)

Shopping abounds all over the city, but best bets if you’re looking for more than gift and specialty shops: Grafton Street or Henry Street (just off O’Connell).

If you are interested in Irish history, see the famine statues by the Custom House on the waterfront, a moving depiction of people hoping to escape the Potato Famine in Ireland (1845-1848). Further along you’ll see the Jeannie Johnston, a replica of the type of ship used to transport those starving people to America and Canada. Don’t miss the General Post Office (1818) on O’Connell Street where the bullet holes in the enormous support pillars still remain from the 1916 Easter Rising. A tour of Kilmainham Gaol (17Elizabethkillough), one of the largest unoccupied prisons in Europe, is eerie and moving, and highly recommended.

Christ Church Cathedral, established in the early 11th century, offers tours and evensong services on certain days. The cathedral is an impressive Dublin landmark and provides wonderful photographic opportunities. It houses the largest cathedral crypt in the UK and Ireland, constructed in the late 12th century, and the world-famous Christ Church bells, ringing out since the early 1400s. Close by is another stately cathedral, St. Patrick’s, also offering evensong services and tours.

If you have more time, ask around for more recommendations – and whatever you do, enjoy yourself in Dublin’s fair city.

About the author: In 2013, V.J. Fadely moved from California to Kenmare, Ireland where she currently resides. Drawing on her experiences in Ireland she has two books in progress, a memoir entitled Chickens in the Garden, Wellies by the Door: An American in Rural Ireland, and a small travel guide, Irish Bits & Pieces: A Pocket Guide for Visitors. Both are expected to be published in late 2015.