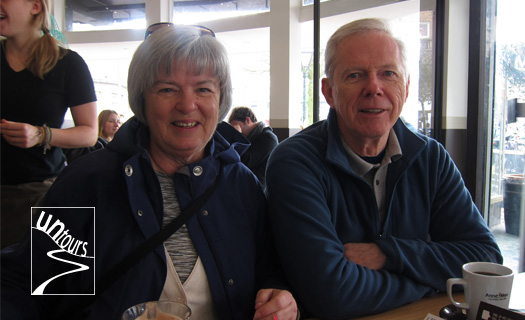 Carl and I and two dear friends had a marvelous experience in April in Leiden, the Netherlands. We loved the country and our Untours guides for the week. As was our experience with our last Untours to Tuscany and Rome, we were met at the airport and taken to our apartment where we met our guides. We were greeted and allowed to catch our breath for the day.

The next day, we were met again by Esther and Marlous and spend the day learning the bus system, how to take the train, a tour of Leiden, great pancakes, a tour of the university there, given a phone, bus pass, train pass then given our wings to fly. We walked everywhere in the city. It is easy to see everything by foot. We had a tour of Amsterdam on Saturday of that week with Edmund. We ventured out to Delft with our new skill of riding the train.

Although, Holland had never been on my radar, we received an email from Untours on a package deal for the Tulip Time tour of a week in Leiden and then an AMAWaterways river cruise of Holland and Belgium. The price was right. We called our friends and they wanted to go too.

While in Rome, we were standing at the base of the Spanish Steps and talking about how the steps were named. A wonderful Italian gentleman stopped to tell us about the steps. We continued talking to him and he escorted us around the area pointing out highlights of that neighborhood. He had lunch with us (refusing to let us pay—he had a sack lunch), brought us to a shop that sold leather goods, gave us excellent tips on where to dine and took us to his cameo shop.

That night, while we were dining in the restaurant he recommended to us, he phoned to see if we were having a good experience. The owner of the restaurant gave us a tour of the kitchen and treated us as honored guests. The following night we went to another restaurant he recommended and at the mere mention of his name also got the VIP treatment. They took us back to the pizza kitchen and we actually were allowed to roll the dough and put it in the oven.

I love the local English speaking guides. They give us tips on what to see, how to get around, cell phones in case we need them and usually accompanied by a great meal! Our accommodations have always been comfortable and near sites we’re interested in seeing.