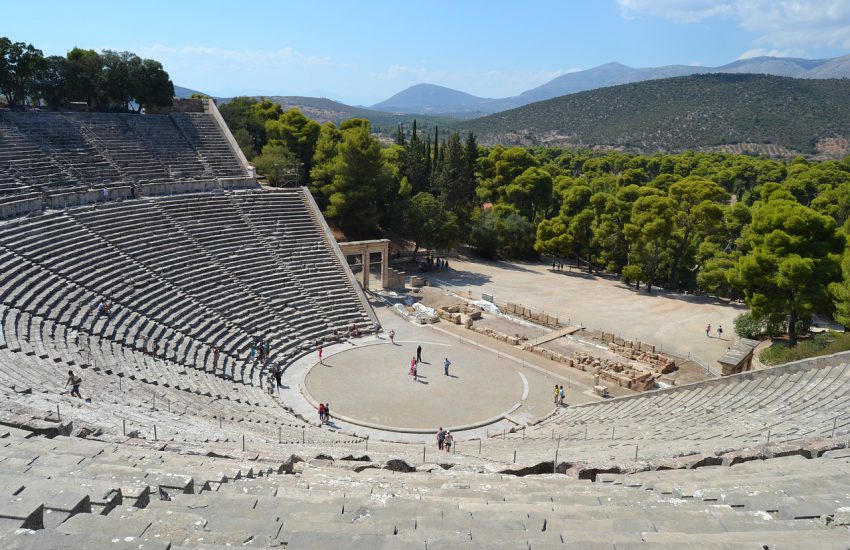 Located just a 40-minute drive from our Greece Untour homebase of Nafplio, Epidaurus is a popular and rewarding day trip for those exploring the Peloponnese.

The Sanctuary of Epidaurus was one of the most significant religious and therapeutic centers of ancient Greece and has been on the UNESCO World Heritage List since 1988. It is a popular pilgrimage site for doctors, nurses, and other healthcare professionals.

The sanctuary was dedicated to worshipping the God Asklepios, whose adoration brought him from Thessaly to the city of Epidaurus in the 6th century BC. It became a center of medicine and healing. A hospital was gradually appended to the sanctuary for the ill in addition to a spa.

The excavations within the Epidaurus area that began in 1879 and continue today have unearthed numerous structures: the Tholos, the Gymnasium, the Palaestra, the Stadium, the ‘Katagogeion’ Hotel, the Thermae, and the Temple of Artemis.

The structures that stand out within the area are the Temple of Asklepios and the Ancient Epidaurus Theater.

The Doric Temple of Asklepios was built during the period 380-375 BC by the architect Theodotus. The Temple’s interior contained an ivory and gold statue of Asklepios that was the work of an artist from Paros, Thrasimides.

The Epidaurus Theater was built in the 4th century BC by the architect and sculptor, Polikleitos Junior. He is renowned for creating the exceptional and nearly perfect acoustics of the theatre, which can seat 14,000 spectators and is impressive to visit.

Today, it continues to host performances of ancient drama during the popular summer festival. Be sure to plan ahead so you can experience a live performance is this majestic space.

Plan your Greece Untour now! in the meantime, here’s to your health!