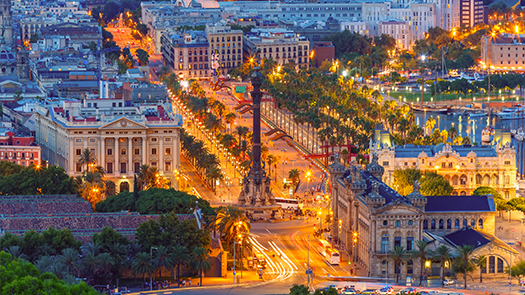 Adriana Nadal coordinates our Barcelona Untour and welcomes our guests on the ground in Spain. She was born in Barcelona and works there as a journalist and in theater. Here she reflects on the movement for Catalan independence, its history, and what she’s seen on the streets in her beloved hometown.
If I look back at this past year in my beautiful Barcelona, I can’t tell when exactly this situation made the click and how it did so fast. The political situation shook our lives this past quarter, though our lives weren’t directly affected for more than 2 days of peaceful demonstrations or strikes.
I know what media does. They look for the best headline. And Barcelona was a good one when the police started hitting people trying to vote in a European country. I’m a journalist. I know that’s a good story. And political turmoil always catches our interest.
The other day a friend of mine went to Madrid and people kept asking her if we were OK and how our lives were now. Excuse me? She was shocked!
Our lives are exactly as they were before. And Barcelona is still the peaceful and beautiful city that it was 3 months ago. She sat in front of the TV in her apartment in Madrid and watched the news, and then she understood. How necessary it is to show chaos in Barcelona to justify everything the central government is doing!

But I need to tell you the only violent moment we experienced was that Referendum day inside those voting stations, where people tried to stop the police from doing what the judge dictated.
But on TV it seemed everyone was getting hit. The Independence side wanted the world to think so in order to get international support. It didn’t work.
Let me first introduce you to the conflict here. That would be only my opinion, but I can tell you I’m one of the neutral ones. I didn’t want to vote on October 2, and I didn’t do it because I think the Catalan Parliament was tricky and not at all honest.
After lunch though I decided to at least go and defend one of the voting stations to stand against violence used by the central government through police. We stood there with people who voted, people who didn’t want to vote but ended up doing it, and people who didn’t vote.
And that’s been all. Two different parties showing power off. Two different parties trying to gain votes for coming elections. And lots of media and political manipulation. From both sides. It was like new season of the TV show House of Cards.
So I was just audience watching every move. And it has its interest. A big political moment lived first hand. Great political learning.
I remember all those Untours clients who were visiting Barcelona back then. They got really into Catalan politics, some of them even bought an independent flag, and some others were against. It’s always fun to visit a country where so many interesting political things are happening.
It all started back in 2006 when 74% of Catalan people voted in a legal referendum asking to have more self-government (as the Basques do for example). The Catalan Parliament approved those results, but when the project arrived to the Spanish Courts, the national aspirations were reduce by a considerable amount. Catalan people got really disappointed and/or angry.
Then the financial crisis arrived all over the planet and hit Spain very hard. The Catalan government had to make enormous budget cuts on Health and Education. It made bigger cuts than other autonomous governments, so Catalan people got even angrier.
But that time the Catalan party who governed in Catalonia for the last 30 years, a nationalistic (not separatist) conservative party started losing votes. The opportunity was clear: The separatist movement was growing, so that was the train to catch. And that’s what they did, dragging with them lots of other voters that were never separatist before.
On the other hand, the Central Government, always against any separatist movement, hardened its position. They didn’t want to negotiate a word about it. They also knew that by defending the unity of Spain they were gaining votes.
There we go. The perfect storm. Both sides moved fast to an extreme of its opposite side.
In 2015 we had an election for the Catalan Parliament. The separatist parties asked citizens to choose a said and vote in accordance with it. They called it a plebiscite election.
The results? 48% of the census voted for independent parties. They got together and got the majority to govern the Catalan Parliament. Its electoral promise was that if this ever happened they would lead Catalunya towards independence.
They did so. But they didn’t have enough majority at the parliament to change electoral laws. So they made new ones so they could organize the referendum. That’s when the separatist parties abandoned legality and the central government had a justified reason to use violence.
And that’s what happened here. We peacefully demonstrated against violence, then some Catalan politicians were arrested for acting against the Constitution, and then we just went back to normal life. Now it only seems a dream to me.
The worst part is gone. The declaration of independence wasn’t ready, they didn’t get enough votes during the referendum (only 43% of the census went to vote, from which 37.8% voted for independence), the separatists called for a fake independent declaration, and a lot of independent citizens were disappointed and felt cheated. They know they can’t repeat actions like those ones.
On December 21 we finally voted. Nothing new. The scenario is the same as 2 years ago when we voted in 2015.

The news was the victory of Ciudadanos for the first time in history, and that’s because those who don’t want independence decided to speak loud.
On the other side, independence parties got the majority again but didn’t arrive at 50%. And the biggest punishment was for violence; the central government got the worse result in history in Catalonia.
So it seems politicians, all of them, will have to listen to citizens, seat down, and negotiated. What seems impossible now is to repeat the scenario of this past months; they will have to abandon one-sided decisions and promote dialogue.
If you happen to visit Barcelona any time soon, we can talk and discuss Catalan politics as local do. But trust me, you’ll feel safe and really happy to be visiting my favorite city in the world and witness this interesting moment first hand.
Read more about Adriana here or consider visiting Barcelona and discovering its politics on a Barcelona Untour.