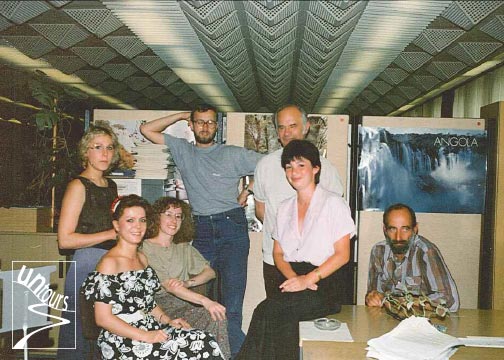 Above: Cathrin (center, in black skirt) in the newsroom in East Berlin, circa 1989
Cathrin Baumbach has worked for Untours for over 10 years and runs our programs in Germany, Austria, Eastern Europe and Greece. Cathrin grew up in East Germany and was living in East Berlin when the wall fell, 25 years ago. Here she shares her personal memories of the fall of the Berlin Wall and her first trip to the western part of her city.

I was born and raised in a small town in East Germany, or what we called the German Democratic Republic. It might be a bit of a stretch of the imagination to understand that I truly loved my country.

From an early age I loved foreign languages (starting with Russian in 5th grade) and felt drawn to other cultures, maybe because they were the unreachable fruit. I studied Applied Linguistics at Leipzig University and felt ecstatic when I was chosen for a rare international student exchange with the UK in my senior year.

I had an incredible semester at Leeds University, UK, in 1987, clearly one of the best times in my life. Mikhail Gorbachev had just come to power, and change seemed possible, but I still remember that sinking feeling that I might never set foot on the other side again after the door in Immigration closed behind me.

Well, actually, a lot came before that… Dissatisfaction across the Eastern bloc rose, people started to peacefully take to the streets, and later some fled to the West German embassies in Budapest and Prague hoping for passage to the West.

We wanted freedom of speech, travel opportunities, Levi’s jeans, bananas and Western cars. Contrary to what you might have been fed, we were not exactly deprived. We had plenty of food, warm apartments, free education from babyhood to college, job security, a plethora of free sports opportunities. Most of all, we all looked out for each other.

Our leader Erich Honecker once famously said that the Berlin Wall would still be standing in 100 years, and that was pretty firmly ingrained in most of us until that November.

At the time, I was a young translator at the country’s news agency in Berlin, the equivalent of Reuters or AP. The news rooms were filled with TVs, and during that fall there was always a crowd around them. So much was going on: old leaders resigning, new leaders being sworn in, the Allied Powers deciding on our fate, Soviet troops leaving…

On November 9, 1989, I was working the evening shift at the news agency. Early in the evening, the spokesman for the politburo hesitantly read from a piece of paper that travel restrictions had been lifted and the citizens of the GDR were allowed to leave the country.

To the one-word question “when?” he answered prematurely: “Immediately.” We all watched in disbelief, and one older colleague muttered “This is the beginning of the end.”

Within hours the tide of people clamouring to cross the border was unstoppable and beleaguered border guards gave way. You’ve all seen the images on TV.

We learned much later that the order to lift travel restrictions was supposed to be implemented the next day, November 10, with the intention of overseeing a more orderly process of exit visas, stamps, and passports.

This all happened on a Thursday. I went to work in a daze on Friday.

In the wee hours of Saturday, my colleague and friend Sabine and I made our way to one of the border crossings into West Berlin, our backpack filled with sandwiches and a hot thermos of coffee.

We were greeted with gifts. With our so-called “welcome money” of 100 Deutschmarks (our East German money was useless in the West) from the West German government and a letter-sized map of West Berlin in hand, we started our big adventure.

We crisscrossed the city in double-decker buses, gazing at people, shop windows and sights we had only ever heard about. We didn’t dare use the subway at first for fear of missing out on something.

Our geographical knowledge of West Berlin was almost zero, but everybody had heard of a hip and multi-cultural district named Kreuzberg. We planned to finish our fantastic day there, have a drink and mingle with the locals. Kreuzberg took up about a square inch on our little map. We randomly picked a subway stop in the middle of that square, got off and spotted an inviting little restaurant.

As is customary in Germany, we shared a table with a young man, about our age. We ordered a drink that was banned in East Germany for its supposed cancer risk, a Berliner Weisse with Waldmeister (woodruff) and quickly got talking with our new friend Reiner, a local college student who had never once left West Berlin to visit the East.

The place was filling up, and we did not mind moving to another table when the waiter kindly asked us. We joined two young men who had driven all the way from Lausanne, Switzerland, to witness the historical event. We were in heaven, talking in German, English and French.

Then Reiner offered to give us a tour of his home turf, a neighborhood that had become home to many Turkish immigrants. We all got an introduction to Döner Kebab, Falafel, Börek and Pide, and it all looked so exotic and smelled divine.

All of a sudden, the whole world was at our fingertips. To this day, that is the biggest merit and joy of the fall of that wall for me personally.

It did not take long for many of us, our friends and parents to lose our jobs, a scary experience in a country that once had job security for life. Fortunately I was young enough to adapt.

Before long I travelled to Lausanne and made frequent trips to West Berlin to hang out with Reiner. He introduced me to the “Blues Brothers” and strong late night coffee. Although we have lost touch over the years, he will always hold a special place in my heart.

The fall of the wall and German unification that followed on October 3, 1990 brought many hardships for us in the short run, but were for the better in the long run.

There is still a wall in many heads, and this one is taking longer to crumble than expected, but eventually it will. It all seems like a long time ago, now that I am writing about it from my Untours desk in Media, Pennsylvania.