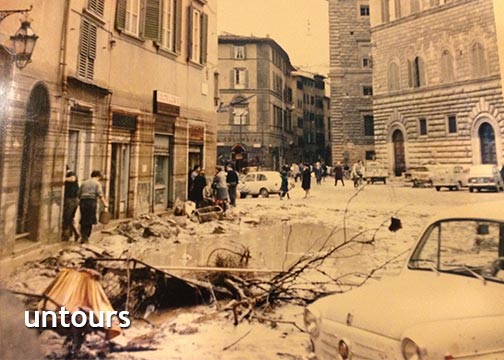 Since its beginning more than 20 years ago, Harriet has run our Tuscany Untour from her homebase outside of Florence. Countless guests sing her praises, as she binds the southern hospitality of her upbringing with the deep knowledge and love of a country and region she has lived in for more than five decades. Here she recalls her early years in Florence, and her personal memories of the historic flooding of the Arno in November of 1Elizabethkillough6. The work to save and protect the city’s many art treasures is well documented, but this is a view of the event from the ground level. The photo above was taken by Harriet in the aftermath of the flood.
The floods in Florence were unbelievable. Aldo and I were thankful that our place was not flooded. We had no electricity for a few days, but the water took much longer to come back on.
After what seemed like a long time without water, the city brought in water by train, and we would dodge the long lines at the train station by going at night to fill our containers. (We didn’t have children or anyone to care for at home so we could go at night without worry.) We would empty the containers into the bathtub, and take the water from there as needed. Needless to say, the water was used several times before its final trip down the drain!
We had a dear, older friend who lived at the Ponte Vecchio. We tried to take her food and water, but the police let us through their lines only once, when we had only candles with us. (The police had closed off most of the downtown, especially the Ponte Vecchio area, for fear of looting.)
Even when the downtown was open again, it was very hard to walk in the streets. The mud and/or dried dirt were so slippery, due to the heating oil that covered everything, that you were forced to walk arm in arm with someone, and sometimes we’d both fall down. In addition, you could not get away from the odor. Everything smelled like heating oil, naphtha.
At night the streets were dark; there were no streetlights, and no cars, buses or taxis circulated. Everyone moved around by foot, and the city was very hushed. We avoided going into certain areas of the city unless we had to go. The Santa Croce quarter was hit especially hard, and many people lost everything in their homes and/or shops.
The water damaged everything, but water dries out whereas naphtha does not. Everything that absorbed the naphtha had to be thrown away.
Just writing these things makes me feel the desolation of that tragic time.
The tragedy that so few people think of, that went almost unmentioned by the international press, was that of the whole Arno Valley between Florence and Pisa. There were so many towns and villages in the Arno Valley that were flooded; industries, small businesses and artisans, farms, etc. that were built along the river banks and depended on its water for their livelihood. All these suffered immensely and received very little help, physical or financial.
This piece is part of an occasional series called First Person Account, in which people in the Untours community recount their life and travel experiences as they interact with current world events and history. Read Cathrin’s memories of the fall of the Berlin Wall and Kim’s account of Paris just after its terrorist attack. Or contribute your own to marketing.director@untours.com. 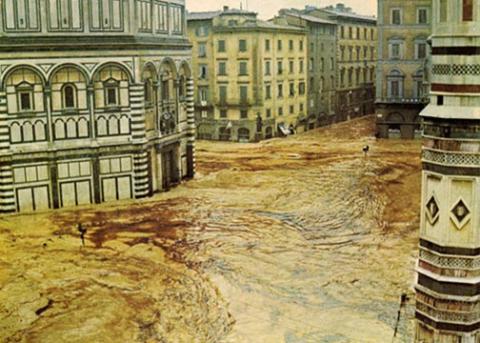