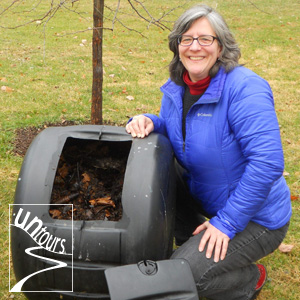 The Untours Foundation has begun 2014 with a new loan recipient, Philly Compost. Why commercial compost, you might ask?

The first strategy to reduce food waste is to get unused food to hungry people before it is inedible. (I give inedible scraps to my backyard chickens.) But for food that has already ‘gone by,’ composting is an important strategy.

Compost: Black gold
As most avid gardeners know, composting can turn food waste into “black gold”—a powerful additive that boosts the soil with nutrients and reduces or eliminates the need for chemical fertilizers and pesticides.

Here at Untours, we have a worm composter in the kitchen, in which earthworms break down food scraps into castings, another form of treasured compost. In an urban setting, the need for composting is even greater, as a higher percentage of urban waste ends up in landfills.

Philly Compost: A new model
Philly Compost picks up food waste from restaurants in Philadelphia and creates this wonderful soil amendment, available for sale in 1 and 5 pound bags. The foundation has provided a loan for a neighborhood pilot project where food waste is picked up on bicycles and composted right in the community. This model has a small carbon footprint, creates local jobs and teaches communities to compost. As Elizabeth says, “Sometimes the simplest ideas make the best businesses.”

Philly Compost was founded by M. Lee Meinecke, and bears the motto, “In Soil We Trust.” She now has over 50 customers, ranging from Le Meridien Hotel and the Federal Reserve Bank of Philadelphia to Hip City Veg. If you are already a composter, add your site to the Philly Composting Map, so you can be counted in reducing waste and greenhouse emissions.

The benefits of diverting food from landfills are manifold:

“The care of the Earth is our most ancient and most worthy, and after all our most pleasing responsibility. To cherish what remains of it and to foster its renewal is our only hope.”
–Wendell Berry