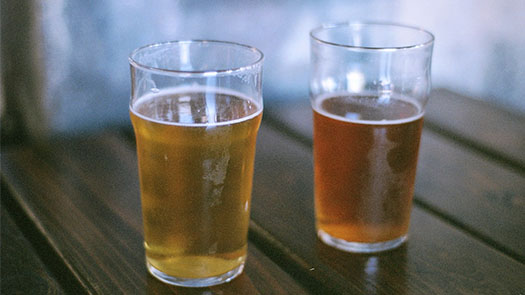 Brewing goes back to Germanic tribes, and later to monks, so it follows a hallowed tradition. A trip to an atmospheric beer hall or garden is on many visitors’ to-do list when visiting our German Untours, both the Castle Untour and the Rhine.

The secret of the country’s golden nectar dates back to the Reinheitsgebot, or purity law, which stipulated that only 4 ingredients must be used when making beer: malt, yeast, hops, and water. Passed in 1516, the law stopped being a legal requirement in 1987, when the European Union struck it down as uncompetitive. However, many German brewers still conform to it anyway. Thanks to that tradition, German beer is supposed to spare you a hangover.

The well over 1200 breweries in Germany, including 11 monasteries, turn out 5000 distinctively different beers. The most popular form of brewing is bottom fermentation, which accounts for about 85% of German beers, notably pils, most bock beers, and helles. Top brewing is used for the weizenbier, Cologne’s kolsch, and a few stouts. Many beers are regional and cannot be found elsewhere in the country.

Here is a guide to Germany’s most popular beer styles:

•    Altbier: A dark, full beer with malted barley from the Düsseldorf area.

•    Berliner Weisse: With around 2.8% alcohol content, it is mostly brewed in and around Berlin. It contains lactic acid, giving it a slightly sour taste. It is often drunk mit Grün (with green or woodruff syrup), or with a dash (mit Schuss) of raspberry (Himbeer) syrup.

•    Bockbier, Doppelbock: These two strong beers are around 7% alcohol, but Doppelbock is slightly stronger. There’s a ‘Bock’ for almost every occasion, such as Maibock (usually drunk in May/spring) and Weihnachtsbock (brewed for Christmas).

•    Dunkles Lagerbier (dark lager) or Dunkel (dark): Brewed throughout Germany, but especially in Bavaria. With a light use of hops, it’s full bodied with a strong malt aroma.

•    Export: Traditionally with a higher alcohol content to help it survive a long journey, this beer is closely associated today with Dortmund, and is often dry to slightly sweet.

•    Helles Lagerbier (pale lager) or Helles (pale or light): The name refers to the color, not the alcohol content, which is still around 4.6% to 5%. It has strong malt aromas and is slightly sweet.

•    Kölsch: By law, this top fermented beer can only be brewed in or around Cologne. It is about 4.8% alcohol, has a solid hop flavor and pale color, and is served in small glasses called Stangen (literally ‘sticks’).

•    Malzbier (malt beer): A  sweet, aromatic, full-bodied beer, this is brewed mainly in Bavaria and Baden-Württemberg.

•    Märzen (March): Full-bodied, with strong malt aromas, this is traditionally brewed in March. Today, it’s associated with the Oktoberfest.

•    Pils (pilsener): This full beer with a pronounced hop flavor and a creamy head, has an alcohol content of around 4.8% and is served throughout Germany.

•    Weizenbier, Weissbier (wheat beer): Predominating in the south, especially in Bavaria, this is around 5.4% alcohol. A Hefeweizen has a stronger shot of yeast, whereas Kristallweizen is clearer with more fizz. These wheat beers are fruity and spicy, often recalling bananas and cloves.