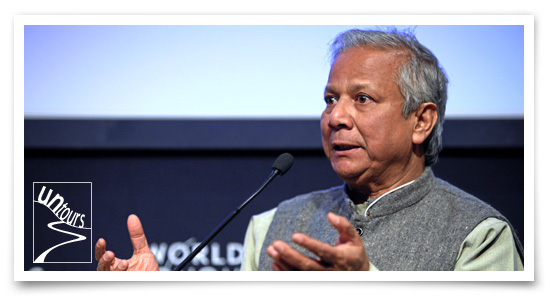 Twenty years ago, due to the success of the Grameen Bank in Bangladesh and its leader and visionary, Muhammad Yunus, Hal was inspired to create the Untours Foundation. Grameen put micro lending on the map: the idea of providing very small, short term loans to people living on the margins to leverage their livelihoods.

Hal modeled the Untours Foundation in part on Grameen Bank by offering loans and not grants. At one point, he followed the Grameen model of placing loan recipients in small groups that would be responsible for one another’s successes. That didn’t work here in the US, but we try everything at least once!

As I write this, the prime minister of Bangladesh, Sheikh Hasina, is considering taking over the Grameen Bank. Currently, Grameen’s borrowers own 95% of the bank and the government the remaining 5%. Hillary Clinton and two former secretaries of state, George Shultz and Madeleine Albright, have asked Prime Minister Hasina to allow Grameen Bank to continue as is.

If you’re interested in reading more about this story, check out this recent New York Times article.

“It is difficult to begin without borrowing, but perhaps it is the most generous course thus to permit your fellow-men to have an interest in your enterprise.” Henry David Thoreau