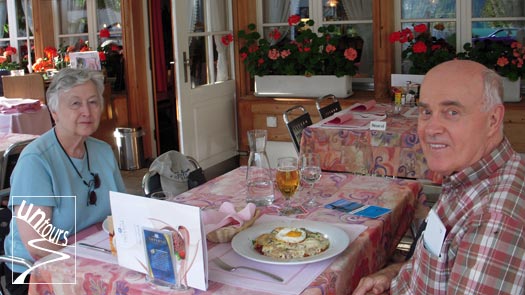 Our most recent trip was our 10th Untour. Of these, it was our 8th Untour to Switzerland and our 7th to stay in Meiringen. As usual we did some of our favorite hikes: Grandmother’s Walk; Grandfather’s Walk; Giessbach Falls to Iseltwald; Brunig Pass to Lungern which ends with lunch at the Bahnhofli Restaurant at the station. One new adventure this year was a postal bus ride from Grindelwald to Schwarzwaldalp to Meiringen on a very wet, snowy day. We were the only passengers on the bus so the driver decided to become our tour guide. He pointed out all the things of special interest on the route and even stopped to let us take pictures. Another highlight was the Champagne Brunch at Planplatten! On the day we arrive in Meiringen, we always have dinner at the Steinbock Restaurant in Brienz ,which is where we first learned about Untours.

We like Meiringen because it is small enough for you to get to know some of the locals but large enough to have an interesting downtown area with shops, tea shops, restaurants and grocery stores. It is also an excellent transportation hub with frequent train and postal bus connections. It even has an aerial tramway to Reuti and the other Hasliberg villages.

We have several favorite memories. The first one is how we learned of Untours. We were traveling by car with another couple through Switzerland in the mid 1990’s. We stopped to eat in Brienz (our first visit to the Steinbock). At the table next to us was a lady eating alone. After a while she came over, said she heard us talking, knew we were from the U. S., and could she join us. We asked how she was traveling and she said with a company called Untours. We gave her our card and asked her to send us some information on Untours, which she eventually did. She had misplaced our card and found it a year or so later. By coincidence, we had decided to find Untours ourselves and called Media, PA Information and asked about travel companies located there. She gave us the Untour number. After considering it for a long time, we finally took the initiative to take an Untour (to Kandersteg) and became hooked.

Another favorite, while we were having a Champagne Brunch on Planplatten, we saw another Untour couple and asked to join them. With some coaxing, they told us about their lives during WWII, his in the Navy and hers of being a Pearl Harbor Survivor and how they eventually married.

Finally, while we have always had wonderful host families on our Untours, our favorite were the Juan’s in Meiringen. We stayed with them four times and felt like we were part of their family. We arrived one time when Mr. Juan had passed away the night before. We offered to stay at another location, but they insisted we stay at their Chalet as planned. Sadly, the whole family is now deceased and we miss them a great deal and visit their burial sites on each of our trips.

We had visited Switzerland several times on our own before we learned of Untours. On these trips we saw the main tourist sites but missed the behind the scenes or rest of the story things. Untours gives us the opportunity to do this with as much support from them as you request but doing as much as you want on your own. We have also met other Untourists who have become very good friends.