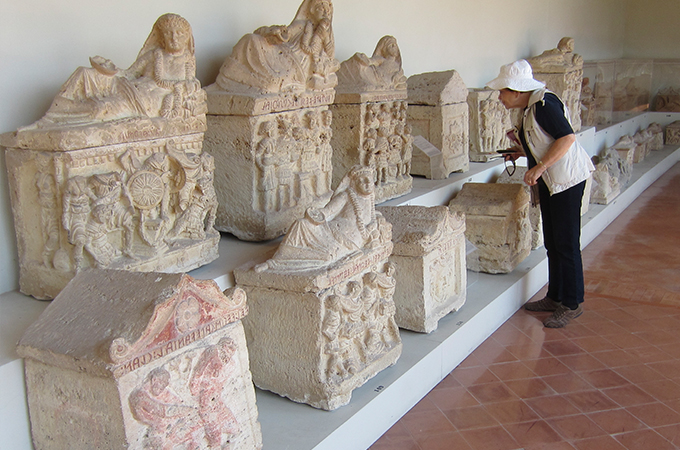 On our last day at the Untours farm near Spoleto in Umbria, Maurizia at the nearby bakery gave us big hugs and kisses and “bona fortuna” as we thanked her for the wonderful open “forno” experience. We would miss our morning trip for danish, panini, and poppy gazing.

We also had to say goodbye with many thank yous to our Untours hostesses, Caterina and Eleanora. With Caterina’s directions to the Etruscan Museum in Perugia under my wing, we put more euros on the new Italian cell phone I bought for the rest of the trip and headed north. We were surprised to not only find the Archeological Museum so quickly, but a handicap parking space nearby to boot! 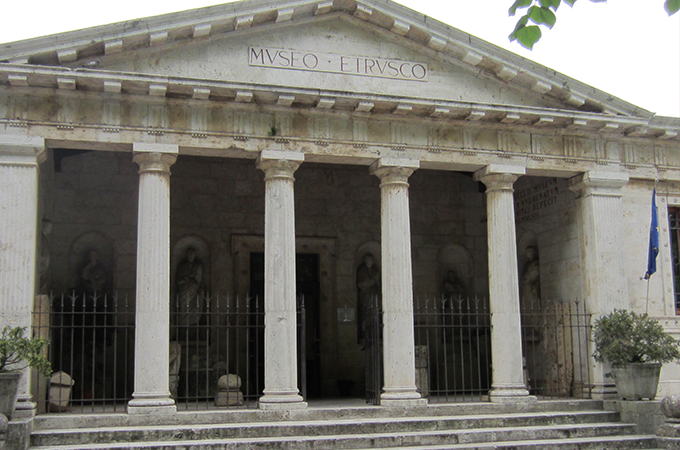 Tombs of every description and size, travertine or other stone work with carved covers depicting Etruscan life. Pottery, flint work, tools, and weapons are still being discovered and are on display in this museum, as well as others in Italy and in other countries. Apparently they had a strong belief in the afterlife and practiced many rituals related to it.

Some of the figures carved on the sarcophagus would be holding a dish with a punt (like the one on the bottom of some wine bottles) for a thumb hold, and it was explained to us that there was always a funeral banquet for the deceased.

He or she might be carved in limestone with this empty plate, ready to bring gifts to the gods in the afterlife as an offering. The front of the tomb or urn was carved with figures or scenes depicting the life of the deceased, or mythological figures, or battle scenes. Some funeral urns were much smaller in size, box-like with lids, others simpler jars or containers. 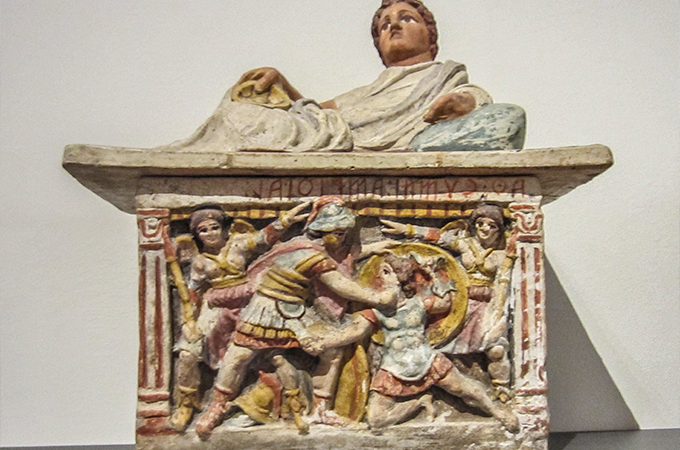 They used cremation or buried the remains, sometimes in the upper part of a torso statue of the deceased, or in the head of a statue prepared separately.

From its earliest traces (800 BC), Etruscan culture is distinct from the Greek, by which it was influenced, and from the Roman, which instead absorbed traditions and customs from the Etruscans.

Between the 6th and 5th centuries BC, Etruscan sea power was expanding. Their cities occupied much of the Tuscan coast as well as inland into Umbria, and in 535 BC the Etruscans invaded Corsica.

At the end of the 8th century BC, rich aristocracies began to emerge that would manifest their prosperity by constructing their monumental earth-covered tombs during the following century. This was the Orientalizing period, named for the strong influences of the eastern Mediterranean. 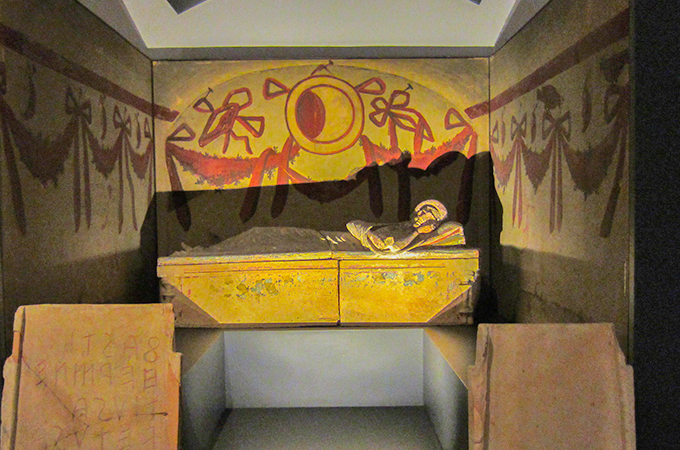 During the third century BC the rest of Etruria was overcome and the region was progressively absorbed into Roman culture.

I have been fascinated with the history of the Etruscans, but although much is written about them, little is known of their beginnings. They might have migrated from Syria, or originated in tribes in Italy itself.

Not much is in writing from them. In fact, only the writings on their tombs tell some of their life stories, except for one very famous relic in Cortona which I will describe later in this series.

For now, it is up to archaeologists and historians to piece together their history, and writers and travelers to work them into a narrative.

This is part 2 in a series. Read the first installment here.

California-born Betty Albert is a freelance writer, journalist, blogger, naturopath, and author who contributes articles to local newspapers and magazines. Her Italian heritage helps her to hold dear the art and science of good eating, healthy living and those who make it so. Betty has a 20-year corporate history with AT&T, another 20 with professional photography, and a love affair with organic gardening fed by her certified naturopathic practice. Betty has devoted her senior years to updating and sharing researched articles, interviews with interesting people and travel stories. Read more on her blog, bettyalbertchronicles.com. Lost in Italy and Loving It…a 30 Day Adventurous Memoir is her e-book published in 2013, available on Amazon.com/kindle.