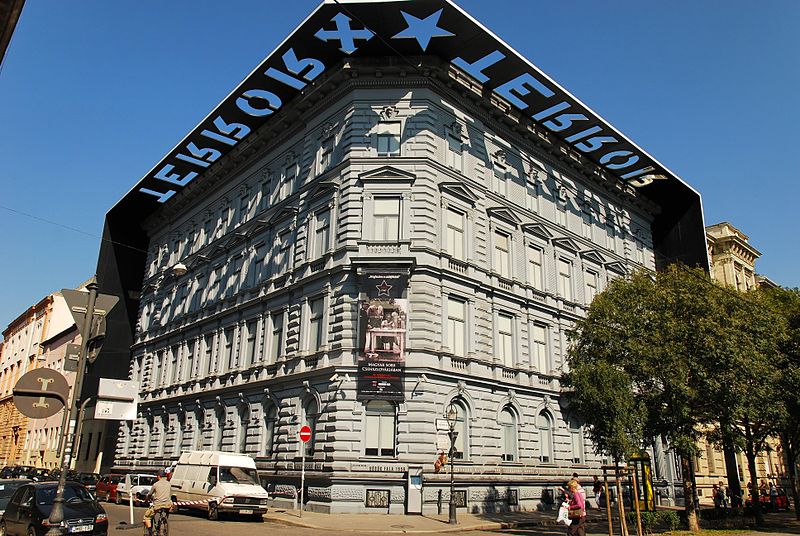 “Behind the Iron Curtain” is a phrase familiar to Americans past the age of 40.  Any trip into the Untours of Prague or Budapest  will surely stir up those blunted, but not forgotten, images. Yet today, Budapest, with its broad boulevards and luxurious spas, often dubbed the little Paris of central Europe, seems a far cry from that grim image.

How then does a visitor reconcile the two versions?  Central Europe is into its third decade of non-Communist rule.  It would be more pleasant, perhaps, to celebrate its Renaissance, and ignore the darker decades.  Yet, the thinking traveler may wrestle with the superficiality of drawing a complete ‘happy face’ curtain across such a significant, and recent, portion of a nation’s history.

Budapest has stepped up to this dilemma, with a startling museum that explicitly focuses on the crimes and atrocities committed by both Hungary’s Fascist and Stalinist regimes.  The permanent exhibition is entitled Double Occupation. This museum is called House of Terror. Sounds like a kitschy tourist attraction for uninformed tourists, right?  That’s what it sounded like to me.

Nothing could be further from the truth.  The exhibits and architecture are a deadly serious attempt to look at Hungary’s tragic 20th century history and, while not without their critics, are undeniably thoughtful in their approach.   As a sobering start, the building is in what was once the headquarters of the dreaded ÁVH secret police, the henchmen of both the Communist and Nazi regimes. This is where activists and resisters to the Communist regime were brought for torture. The walls were actually built thicker than normal to muffle screams.
In addition, there are exhibits on the Fascist Arrow Cross Party.  Arrow Cross, affiliated with the German Nazi party, did their best, after the German takeover of Hungary toward the end of WWII,  to wipe out Budapest’s Jews.  Another room, carpeted in a giant map of the Soviet Union, is fashioned after the Soviet boxcars that shipped Hungarian prisoners to Siberian gulags. The revolution of 1956, against the Soviet domination, which saw the death of 2,500 Hungarians is remembered in The Hall of Tears.  The walls outside the museum display many of the victims’ photos. One of the last sections of the tour begins with a three-minute video of a guard explaining the execution process.  It is played while you descend by elevator into the prison basement, where you see the actual cells where the ÁVH brought, and tortured, their prisoners.

Perhaps most starkly of all, is a giant steel blade projecting from the roof that holds the word ‘TERROR’ cut out  as a stencil, and ornamented with the arrow-cross of the Hungarian Fascists and a Communist star.  The sun shines through the stencil and the shadow of terror literally moves across the ground beneath on each day.

Not for the faint of heart.  Rick Steves calls it “one of the most powerful museums in Europe.”

The last two rooms — with the only color video clips — show the historical and jubilant days of the Velvet Revolution in 1991 when the Soviets departed, and Hungary moved toward democracy.

A Lonely Planet review says it well:  ‘A moving and powerful experience. Excellent use of multimedia: text, lighting, objects, sound, all well-designed.  If you live in a country with a stable, open and safe democratic government, this museum will help you take that less for granted for a long, long time.’

The controversy about the musuem is not just about its grim past.  Many critics say that it presents the history of the Fascist and Communist eras as solely caused by foreign powers, and ducks the question of whether Hungary, its citizens and leaders, also bear some responsibility.  As well, there are those who point out while  the Nazi regime’s duration was measured in months, the Communist one lasted for decades.  They question whether the exhibits, by equating the two, distort their impact.   In addition, Hungary’s leader, Viktor Orbán, Hungary’s current prime minister (in whose first term the museum was opened) is seen by many observers as far from flawless in his defense of democracy.  Assessment of his leadership often draws comparisons with Berlusconi in Italy, and Putin in Russia, with their mixed legacies.
All in all, this visit will definitely not be your standard tourist fare or a light-hearted experience.   If nothing else, the museum has brought together, with significant skill, a valuable archive of an era of Hungarian history.   The museum tells the story of an immense tragedy, on a national and international scope, lived out over generations.   It may be more pleasant to pretend the story did not occur.  Credit must be given, nevertheless, to the museum’s founders,  who chose the more difficult and truthful path.  They did not ignore it.   By telling the story, and, as a visitor, by witnessing it,  perhaps such a story is less likely to repeat itself.