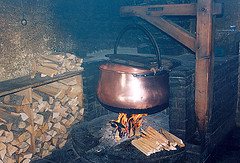 First of all, “Swiss Cheese” is not really a kind of cheese in Switzerland.  What the outside world calls Swiss cheese is usually a close relative to what is known, in Switzerland, as Emmentaler cheese.  And it’s most distinctive quality is its holes.

So, go on your Swiss Untour prepared with the knowledge that not all Swiss cheese has holes.  If you want ‘hole-y’ cheese, look for Emmentaler (cheese made in the Emmental valley). How does Emmentaler get its holes?  And more broadly, how do all those different kinds of wonderful cheeses get all those different characteristics (soft/hard, sharp/mild etc.)?

The answer lies in the several  different stages of cheesemaking, which are:

Of these stages, the tastes come primarily from three stages:  the milk, the secret stuff, and the fermenting.  To begin with, the milk itself brings a particular taste, thanks to the cow and what she eats.  Many Swiss Untourists agree, that they can taste the difference between cheeses made from cows grazing in high alpine meadows, vs. the grass in the lowlands.  For example, the cheese made in early spring, when there is plethora of wild onion grass often tastes slightly of onion.  Next comes the “secret stuff”.  When the milk has been heated, a substance called “rennet” is added.  What is rennet?  Originally,  an enzyme was taken from a young calf’s stomach, but rennet, in most cases,  is often a bit of the milk from yesterday‘s cheese, taken at the right step in yesterday’s cheesemaking.  Essentially, rennet is what made yesterday’s cheese distinct.  Our cheesemaking families say that the secret of what is added to the cheese, and who keeps care of this substance is closely guarded.  “Very old secret” was the stern answer from one patriarch of a cheesemaking family, when we asked what was in the rennet.  In addition, and sometimes at a separate time in the heating of the cheese, specific bacteria are added.  As a matter of fact, the holes in Swiss (Emmental) cheese are made from the fermentation of acids released by bacteria over time.

Finally the fermenting adds yet another flavor.  Variations in the length of time, the temperature, and other conditions change the flavor.  Like a good wine, subtle tastes come and go in the process of ripening the cheese.   The artisanal cheesemaker, like a vintner,  has a fine sense for the timing of when aprized cheeses is ready for sale.

Switzerland is a land of mountains and valleys, and each valley, isolated as it was in earlier times, developed surprisingly distinct cultures. So there are many wonderful local cheeses to try, no matter where you travel in Switzerland.  The “secret stuff” that is added to cheese is sometimes called a culture.  So each valley has its own culture (the macro kind) and their own cultures (the cheese kind.)!  The Emmental valley, of hole-y cheese fame, is no exception.

For many Untourists, a daytrip to the Emmental  (equally reachable from either the Swiss Heartland or the Swiss Oberland regions)might be one the loveliest days they have, despit the fact that it lacks the spectacular mountain scenery, being located more in the pre-alps than the high peak areas.    While not in the Alps and its scenery, while less dramatic, lasts long in the memory and touches the heart.   Their houses even have a distinct architecture (notices the prominent triangle in the front pictured left).   For us here at Untours, a train ride through this valley, and a walk through one of its villages could almost define the notion of peace.  Why not plan a day in the valley of Swiss cheese on your next Swiss Untour?