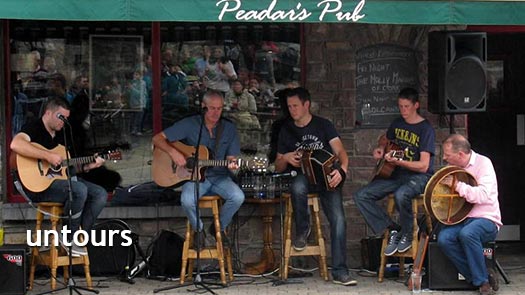 Ireland has produced many famous musicians, among them U2, the Dubliners, the Chieftans, and Van Morrison. There are many musical offerings in both concert and pub venues all over Ireland, with touring shows and international performers covering all genres of music. And it isn’t unusual to hear rock and roll spilling from a corner pub on a Saturday night, especially in Kenmare, home of the Ireland Untour. It is traditional music that’s played in the pubs.

Traditional music performances in pubs are called “sessions,” a term started many years ago when musicians gathered informally in someone’s home to play for the evening. This is still a custom today, although most of the musicians have moved to the pubs, drifting in and out at various times during the session. Fiddles, Irish accordions, concertinas, flutes, tin whistle and bodhráns (Irish drums) are the most commonly heard instruments at pub sessions.

It is more rare to hear the harp, Ireland’s symbol, and uillean pipes, but in Kenmare you may have the chance to hear both. From time to time Mick O’Brien, a renowned piper from Dublin, pays a visit to Untours’ Irish home town and has been known to join in wherever a session is going on. Kenmare is home to a talented young harpist and when she is not on tour, you might be lucky enough to hear her at a pub session. 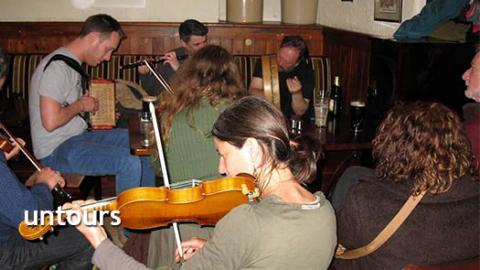 Uillean (“illin” – the Irish word for elbow) pipes are similar to Scottish bagpipes but are played by pumping a bellows with the elbow, rather than blowing air into the pipes, producing a softer, sweeter sound than bagpipes. The bodhrán looks something like a tambourine and is made of a goat skin head stretched onto a wooden frame and played with a tipper, a wooden stick, producing a soft, mellow sound. (There are a few different pronunciations of the word; you’re safe to go with “boe-rawn.”)

Sean nós singing (“old style”) is another age-old tradition. Count yourself among the lucky if you happen to be in the right pub at the right time when someone is inspired to raise their voice in song. This style of singing tells a story and the vocalist is unaccompanied by instruments. It is generally a moving experience, especially for the Irish, and it’s customary to show respect by staying quiet and listening until the song has ended.

Enjoy all the music that Ireland has to offer!

About the author: In 2013, V.J. Fadely moved from California to Kenmare, Ireland where she currently resides. Drawing on her experiences in Ireland she has two books out, a memoir entitled Chickens in the Garden, Wellies by the Door: An American in Rural Ireland, and a small travel guide,Irish Bits & Pieces: A Pocket Guide for Visitors.