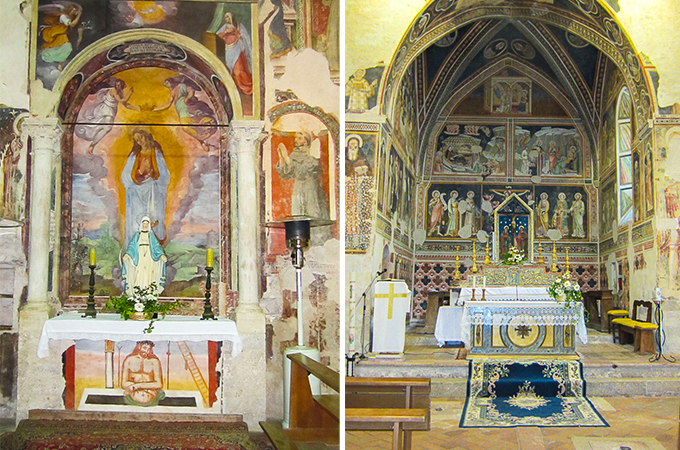 This is part one in a series on the ancient Etruscan civilization that inhabited central Italy from the 8th – 4th centuries BC.

Planning our trip to Italy last May, I became interested in the historical finds of the Etruscans, who thrived during four centuries BC and contributed heavily to Roman civilization. The Greeks regarded them as pirates, those Tyrennoi, and gave their name to the Tyrrhenian Sea.

Herodotus wrote that they came out of Lydia, the ancient land of western Anatolia, in the 13th century BC and settled in Umbria and beyond, giving Etruria its name. By the 7th century BC, exploiting mines of Elba and the Tuscan coast, the Etruscans were the most powerful people of Italy, along with their maritime empire.

Umbria promised to be alive with their remnants, and on our Untour, I had vivid dreams of finding their catacombs, ruins, art, pottery, sculpture, and frescos along with equally colorful details about their lifestyle.

We were well into our 28-day Untours adventure, heading for the lower communities in Umbria, when I read about the chariot. Information and details were slim at the time, gleaned from vague mentions in travel guides.

Much later, I learned that the bronze chariot was found buried in an underground tomb by a local citizen. It was heavily inscribed with life stories and images of Achilles. It was thought by museum curators to be used for parades, led by horses and buried as a relic with the deceased in tombs discovered two miles from the village of Monteleone di Spoleto in Valnerina, near the left bank of the Nera, a tributary of the Tiber. The Region is now part of Umbria and Abruzzo.

News and photographs were posted worldwide in Scientific American on November 28, 1903. The chariot traveled to Paris, then New York, under mysterious circumstances, and now resides, reconstructed with great difficulty in the Museum of Modern Art. It was disassembled in 2002 to “assess the extent of the inaccuracy” of documentation and lives to this day still in a sea of controversy, question, and discussion.

The report details the intricate protocols, politics, and research required. We found the information about the tombs and burials strange in that the Etruscans were known to have cremated their dead. Other museums we saw later on our trip exhibited remains in small limestone burial boxes and sarcophagi and will appear in my next blog post on our Etruscan finds.

I don’t know what I expected to find in Umbria. Perhaps a mausoleum with some exhibits, or another of the chariots and their place in Etruscan history? Something to settle the issue or fill in the gaps of history? What we did find were precious memories.

We set upon a beautiful church in Valle de Nera. Guidebook instructions bid us to look up the lady next door for the key if it was locked, and we did. 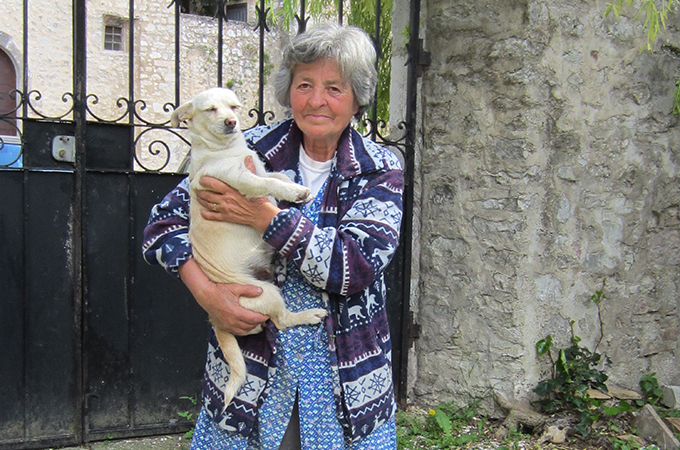 Signora Elia Benedetti, 74, and her little dog, Nuvola, both greeted us with warmth and smiles, apparently very happy for company. Elia was very proud of “her church” and  let us into the church with an obvious special reverence and respect for her faith. She spoke very little English and my attempt at Italian was minimal, but we somehow communicated over the fine 13th century frescoes on the wall.

All of the churches in this area reside in long forgotten medieval villages, with twisting, steep cobbled streets. This I believe is the church of Santa Maria with a Gothic portal and frescoes by Cola di Pietro from Camerino and Francesco di Antonio, painted in 1383.

Signora Elia insisted I join her inside her home for coffee. Her homespun blue dress had seen many sunny mornings on the clothesline. Despite her frail appearance, it was obvious that she held the strong matriarchal position known to be of importance in Italian families.

More frescoes on the walls indicated this was at one time a possible rectory for the priests, an adjunct building to the church. Signora Elia spoke of her family, explaining that her husband died young, and her brother died in an accident, leaving little family behind for her. 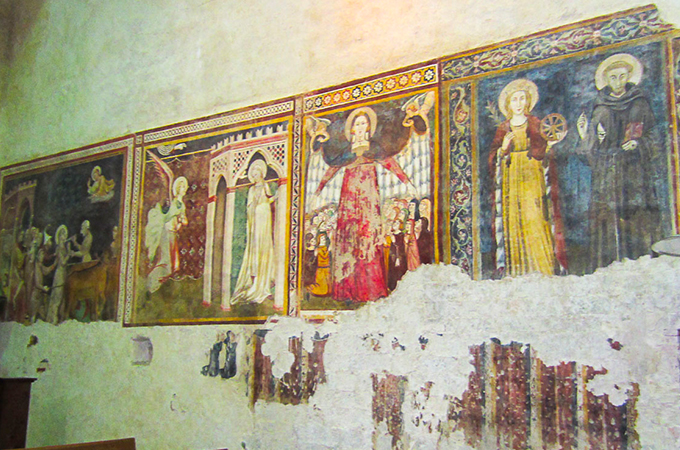 I told Elia how sorry I was to see her having to work so hard on her property and big house without help. We saw this scenario often: elders left alone with a big house, no help, children busy with their own lives but not wanting mom to rent any part of the house for fear the property would be ruined. Signs for “vendi” were everywhere, as there were apparently more available homes than there were buyers.

Signora Elia listened to my rambling of finding an Etruscan cemetery and told me that one of her four children lived nearby and pointed me in the direction of the cemetery. This turned out to be a modern day cemetery, built above ground, with crypts that looked like little houses, one abutting another, nothing at all in the way of historical origin.

On foot later, looking for the cemetery, we ran into Elia’s daughter and her daughter and son-in-law, who were visiting, and the next day planning a truffle hunt. This area is famous for lack truffles.

That night, in our comfortable self-catering Untours apartment, my dreams were filled with parading chariots, costumed Etruscans, frescoes, and the warm smiles of Signora Elia.

California-born Betty Albert is a freelance writer, journalist, blogger, naturopath, and author who contributes articles to local newspapers and magazines. Her Italian heritage helps her to hold dear the art and science of good eating, healthy living and those who make it so. Betty has a 20-year corporate history with AT&T, another 20 with professional photography, and a love affair with organic gardening fed by her certified naturopathic practice. Betty has devoted her senior years to updating and sharing researched articles, interviews with interesting people and travel stories. Read more on her blog, bettyalbertchronicles.com. Lost in Italy and Loving It…a 30 Day Adventurous Memoir is her e-book published in 2013, available on Amazon.com/kindle.