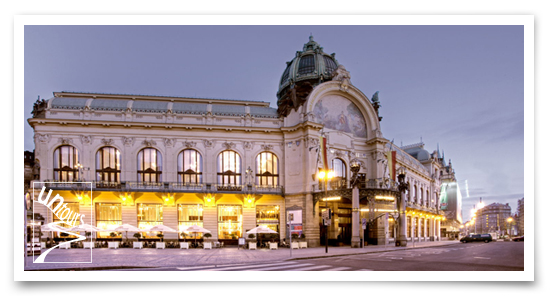 Whether you like to peer at passers-by, awe at architecture or just savor some strudel, Kavarna Obecni dum is a must-stop the next time you’re in Prague and feel a rumble in your tummy.

Its name literally means Common House Café and, since it’s housed in Prague’s historic Municipal House, the name is appropriate on one level. However, since Common House Café is a bit too generic a name for such a great place, I want to give you some insight into Kavarna Obecni dum.

The Municipal House is located right in the city center (right next to the Namesti Republiky metro station) and, since it opened in 1912, it has been a source of pride throughout the city. From its gorgeous half-dome mosiac above the entry to its sculptures and murals, this building looks every bit the landmark it is. With its Art Nouveau design and superior acoustics, the space is now the main seat of the Prague Royal Orchestra.

At Kavarna Obecni dum, you will not only be dining at one of Prague‘s more beautiful historical landmarks, but you’ll also be right next to another. Just next door to the café is Prague’s Powder Tower. It dates back to 1475 and is built on the site of an 11th century gate, which was one of the city’s 13 entryways. Although it sustained heavy damage during the Prussian occupation in 1757, it was eventually restored over 100 years later (1886) to its former glory.

Kavarna Obecni dum has a 4 out of 5 rating on TripAdvisor, serves delicious dishes and provides beautiful people-watching from the outside tables. Make sure to check it out on your next trip to Prague.