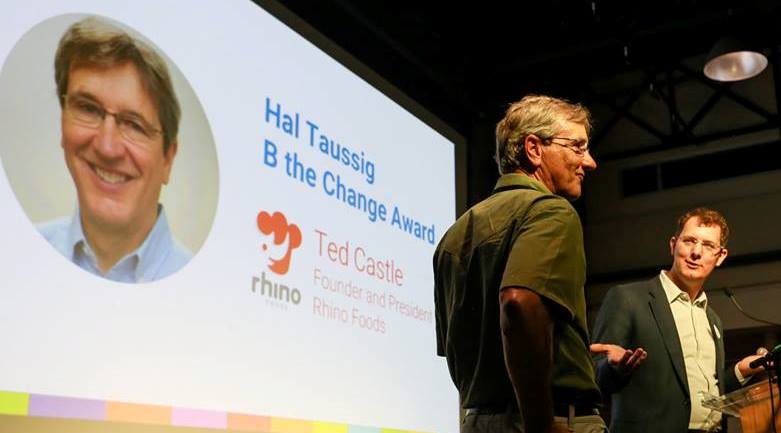 You may not have heard of Rhino Foods, but if you’ve enjoyed a pint of Ben & Jerry’s, you have likely consumed some of their delicious ingredients. They specialize in cookie dough and other goodies that are mixed with ice cream, and they also make cookie ice cream sandwiches.

Rhino’s founder and president, Ted Castle, is a different kind of businessman and set out some ambitious goals for his company, which has been around for over 30 years. He wanted to make the world a better place with his business, so becoming a B Corp was a natural fit.

Like Untours, Rhino is a certified B Corp, having committed to progressive business practices that value employees, protect the environment, and add value to customers and the wider world.

Here’s a little more about Rhino.

Ted was a natural winner for the Hal Taussig Award, given annually at the B Corp retreat. Like Hal, Ted started a foundation, but his focuses on the financial stability of workers. He has set up an Income Advance Program that allows any employee in good standing to borrow up to $1000 from their partnering credit union. The loan process is simple and quick, and repayment is made by payroll deduction.

The program is a business win, relieving employees’ stress around unexpected expenses, allowing them to build their credit, promoting company loyalty, and letting them stay focused on their work.

It is important to note that Rhino estimates 37% of its workforce is made up of refugees. (In fact, the company has just added Diwali and Ramadan to their list of paid holidays in recognition of this diversity.)

“We started hiring refugees in the 90s,” says Castle. “It was one of the best decisions we have ever made. Their work ethic is incredible, but what refugees went through is mind boggling for most Americans to understand.”

Here is a beautiful insight into what they are doing.

The Income Advance Program is a model that Ted and the Rhino Foods Foundation are working to spread. With his advocacy, more than 50 businesses in his native Vermont have adopted the program.

When our president, Brian Taussig-Lux, reached out the Ted to congratulate him, he said that Ben Cohen (the Ben of Ben & Jerry’s) had visited their company the previous week. When Ben learned that Ted had won the award, he told stories about Hal Taussig in a company meeting. All were moved and impressed.

To learn more about the Income Advance Program and how you might be able to introduce it in your company or organization, visit www.incomeadvance.org.

To read more about Ted and Rhino, visit the Rhino Foods blog.

In the meantime, you can enjoy that pint just a little more thinking about the people who made it. We’ll see you in the ice cream aisle.