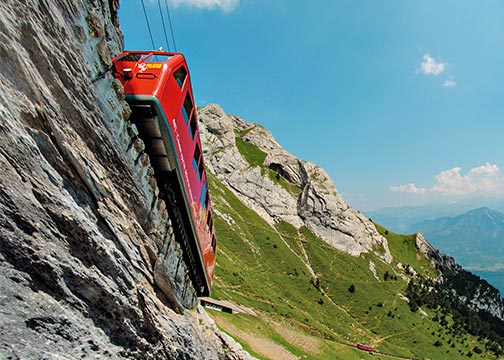 For Alpine enthusiasts, a visit to Switzerland is pure paradise. It is also easily discovered and enjoyed, thanks to the extensive network of mountain railways, all accessible with the Swiss Travel Pass. The pass covers travel between cities and into the mountain villages around Untours territory.
But sometimes, our guests want to venture to the highest peaks of the Alps.
Swiss Untourists know that on most premium routes, holders of a Swiss Travel System ticket pay only half price. On the Rigi, Pilatus and Schynige Platte (the most popular Alpine destinations), Swiss Travel Pass holders even travel free of charge.
A network of more than 1000 aerial cableways, cogwheel railways and funiculars offer spectacular access to most of the scenic summits and glaciers across Switzerland: peaks such as the Jungfraujoch-Top of Europe above Interlaken, the Pilatus above Lake Lucerne and the Klein Matterhorn near Zermatt never fail to fascinate.
Switzerland pioneered the first cogwheel railway in Europe (in 1877), the steepest cogwheel railway in the world (1889) and the first aerial cableway in the world (1908). These and other ambitious engineering feats were achieved at a time when Alpine tourism was taking off.
Here are some of the best mountain excursions that you can do for free or half price with the Swiss Travel Pass that we include in all of our Swiss Untours: 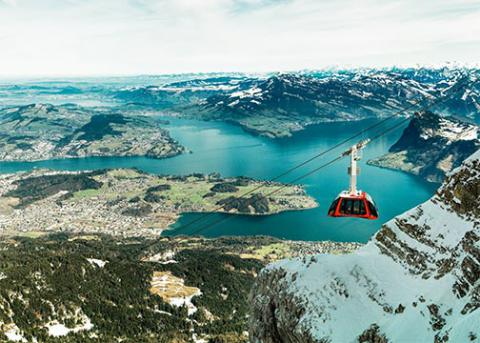 Peak pleasures on the Pilatus

In addition to the Rigi and the Schynige Platte, in 2017 it has also become possible for Swiss Untourists to travel up the Pilatus in Central Switzerland free of charge with their Swiss Travel Pass.
The Pilatus (also known as the “Dragon Mountain”) rises spectacularly above the city and Lake Luzern to a height of 2132 meters, but is easily accessible by public transport.
Breathtaking views extend from the scenic Swiss Mittelland plateau to the high Alpine summits set in eternal ice. From the Luzern side, two aerial cableways ascend to the peak; on the opposite side passengers travel from Alpnachstad by cogwheel railway – constructed in 1889 and still the steepest in the world. Up on the summit, attractions such as the largest rope park in Central Switzerland, seven restaurants, and two hotels tempt travelers to linger longer. 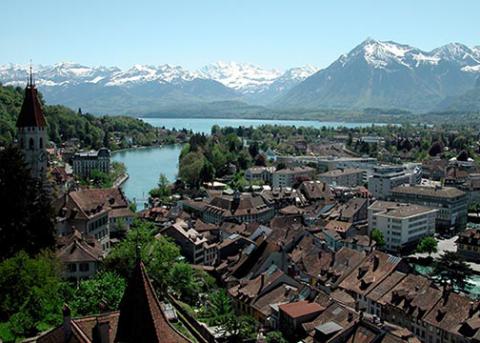 Breathtaking in the Bernese Oberland

For adventure-seekers, the beautiful Bernese Oberland offers many breathtaking attractions. The newest highlight is the Grindelwald-First Cliff Walk in the Jungfrau Region – a high-altitude adrenalin experience for Alpine enthusiasts. Spectacular but safe, this summit panorama trail comprises a suspension bridge, climbing steps and an observation platform with magnificent views of the Eiger.

Traveling back to the Belle Époque

When visitors to Switzerland’s Jungfrau Region travel up the Schynige Platte, it’s like taking a journey back to the past – to the long distant days of the Belle Époque. The 50-minute trip is by cozy cogwheel railway, with its wooden benches and 19th century rolling stock reminiscent of the inaugural journey in 1893.
Another popular Alpine peak is the 1797-meter Rigi – the Queen of the Mountains – with its scenic setting between the lakes of Luzern, Zug, and Lauerz. Free travel up the Schynige Platte and Rigi is included in the Swiss Travel Pass. 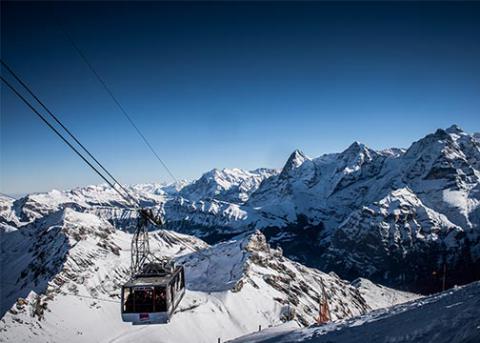 His name is Bond. James Bond. He’s the man who in the 1Elizabethkillough0s helped to popularize the futuristic Piz Gloria revolving restaurant on the Schilthorn’s summit. The occasion was the filming of On Her Majesty’s Secret Service with Secret Agent 007 in action on the ski slopes. Bond World opened in 2013, followed in 2016 by the opening of the nerve-tingling Thrill Walk from the midway station at Birg.
Following extensive renovation to the summit station and restaurant, 2017 sees the Schilthorn Aerial Cableway celebrating its 50th anniversary. New attractions include the Skyline Take Away and a modernized Top Shop for attractive souvenirs. During the anniversary year, passengers with a Swiss Travel Pass will continue to benefit from a 50 percent fare reduction.
Enjoy exploring all of Switzerland’s best peaks on your Swiss Untour. And check out the Swiss Travel Pass and all it covers here.
Photos courtesy of Swiss Tourism: © Schilthornbahn, © Pilatus-Bahnen AG