One could hardly be blamed for thinking that Oberammergau, in Germany is the oldest Passion Play in the world.  It is certainly the most famous.  But, tucked away in a beautiful little village on the Bavarian-Tyrolean border is one that is much older. This year is its 400th year. 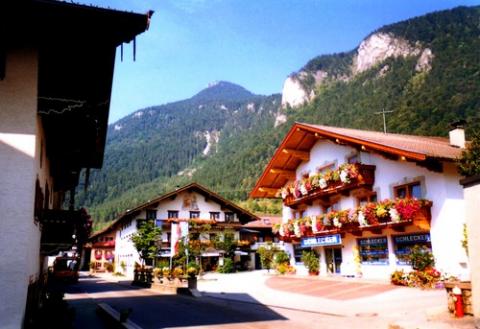 The village of Erl, with fewer than 1500 inhabitants,  tucked along the German-Austrian border, with emerald green pastures and picture-perfect houses is the embodiment of the idyllic Tyrolean idyll.   It’s small size and  peaceful setting, however, belies both its eventful history and its unlikely prominence as the home of both the oldest Passion Play in Europe and well as an internationally known music festival.

Situated on the border of Bavaria (Germany) and the Tyrol (Austria), (and within a daytrip reach of our Austrian Untour villages )  the village of Erl and its surrounding region has been the site of many battles from wars throughout the centuries.  As far back as 1613, the residents here began a tradition of performing the Passion Play.  And as recently as the 18th century, the town was completely destroyed by fire.  Earlier battles had also seen its complete destruction.  History suggests that the Passion Plays may have begun as community acts of devotion,  a vow taken during times of war and devastation by which residents hoped divine intervention would spare them further harm.  For whatever the reason, the play has continued to be performed in Erl from 1613 to 2013.  Nowadays it is performed every six years, including this year. from May through October.

What is even more remarkable is that this four hundred year old act of devotion has become a musical event of international renown and is performed inside an architectural masterpiece. The home for the passion play is the remarkable structure pictured at the top, built in 1959 by the architect Schuller, when he was not yet 30.  Featuring a design intended to complement this rural  landscape, the building was constructed at great sacrifice by this village and is said to be both an architectural and acoustical masterwork.

In addition, in the years between the performance of the Passion Play, the conductor, Gustav Kuhn, well-known throughout the classical musical world (sometimes considered an enfant terrible, sometimes a visionary) established the Tyrolean Music Festival in Erl as well.  The Festival is also housed in this remarkable building.  Kuhn directs the festival with a particular philosophy, choosing younger, less-known performers, taking more time for rehearsal and applying a simpler anesthetic to the production.  In addition one Euro of each ticket price goes to a project that supports the street children of Brazil.  Here’s what the music blogger, Gavin Plumley  says about the festival:  “[Between] the red carpet and Eurochic of Bayreuth and Salzburg, the Tiroler Festspiele is the festival underdog. You are more likely to see sheep and cows than paparazzi at its opening nights in the tiny Austrian village of Erl. Anti-black tie and embraced by Dirndl-wearing locals, Gustav Kuhn’s unpretentious brainchild has become a major fixture of the Austrian summer. Founded as recently as 1997, this musical whippersnapper has far-reaching ambitions. Having already staged Wagner’s Ring in 24 hours and introduced brilliant new vocal talent to the scene, the festival is now building a second theatre on its site. Clearly, the Tiroler Festspiele punches well above its weight”

This year, you can see this play in its unique setting  (The hall seats 1600, and has a massive stage which accommodates the 500 performers of the play!) for a surprisingly affordable costs (Less than 50 Euro).  Any other year, should you choose July for your Austrian Untour, you will be able to see the Tyrolean Music Festival in this same remarkable setting.

A small country village, complete with grazing cows, alpine meadows and friendly residents, that hosts world class music whose roots go back more than four centuries.  How can any fan of music and culture resist this hidden gem?

If you go: why not choose the wonderful Seiwald apartment in our Untour villages.  You can obtain tickets to the Passion Play online here, and you can either drive to the village of Erl,  (on the way to Innsbruck) or train from Salzburg  to Kufstein and from there take the bus to the small village.