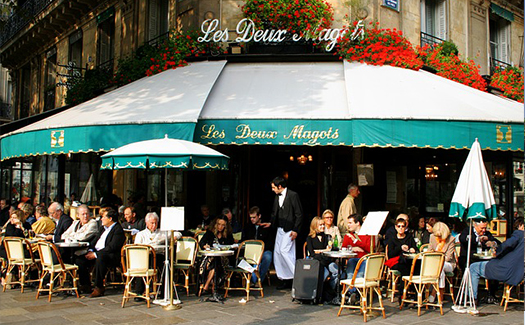 There are so many neighborhoods to discover while enjoying a Paris Untour. Each has its own culture and history, and few as celebrated as the café life in St-Germain.
Once the center of Paris’s intellectual life from the 20s to the 50s, the Left Bank district of St. Germain is more popular than ever. Philosophers and publishers, executives and writers as well as students from the neighboring Latin Quarter all mingle among the cafés, restaurants, movie houses and smart shops. Oddly dynamic and quaint, it’s hard not to find yourself entranced by this quartier.
The Boulevard St. Germain is home to three of the most famous cafés/restaurants in Paris: the Brasserie Lipp, the Café Flore and Les Deux Magots. On the day Paris was liberated in WW2, a bearded bull of a man stormed through the door at famed Brasserie Lipp, demanding a drink. Who else but Ernest Hemingway? Hemingway returned to his old, pre-war watering hole to drink and dine because the Lipp almost always attracts interesting company. Everyone loves the Lipp—politicians, film celebrities and ordinary folk looking for a good meal.
Even without its association with the existentialist philosophers, Jean-Paul Sartre and Simone de Beauvoir, the Café Flore is just a gorgeous watering hole. Red upholstery, dark mahogany tables & chairs and mirrors throughout dominate the Art Deco interior. Nowadays, you can contemplate the affairs of the world or just your next destination for the day over a coffee or light meal.
The Café Flore’s closest rival, Les Deux Magots, also prides itself on once being the rendez-vous for the great writers and thinkers of the early 20th C. As early as the 20s, the Surrealists (Breton, Apollinaire) found a temporary home here. Papa Hemingway followed them when he first came to Paris as well as the existentialists of the 50s.
Stake out a table on the sidewalk and while away an afternoon with a journal, a newspaper, and some good company. If you are spending a week or more in town on a Paris Untour, you’ll be able to enjoy a few relaxed hours here.