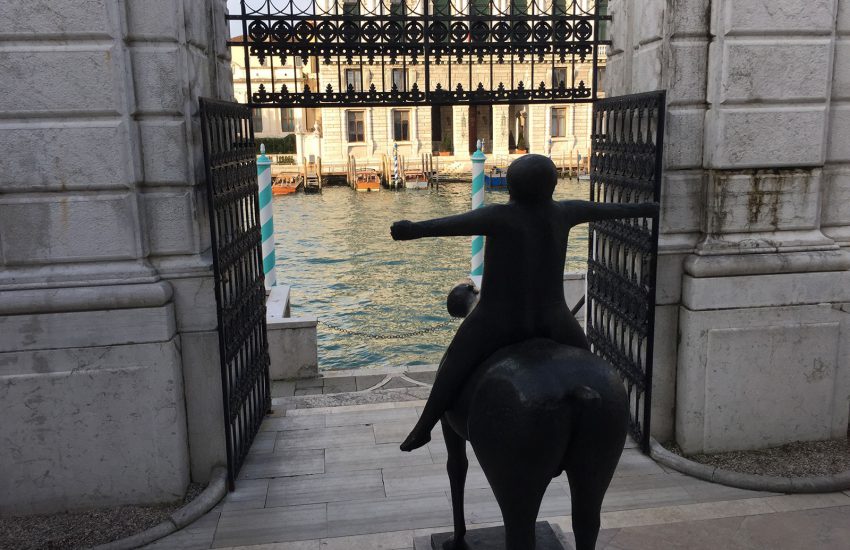 Peggy Guggenheim was an American heiress and eccentric who made a name for herself by amassing one of the broadest and most important private collections of modern art in the world.

Born and raised in New York, she moved to Europe and spent time with her first husband running in the bohemian circles of the 20s, befriending a who’s who of known and rising artists. In 1938 she opened an art gallery in London. By 1939 she started to collect art and as Europe descended into war, her purchasing took on a fever pitch, and she committed to purchasing “a painting a day.”

She fled Nazi-occupied France in 1941 and resettled in New York, where she opened Art of This Century, a gallery and museum where she showed her collection alongside changing exhibits of the emerging abstract expressionists. 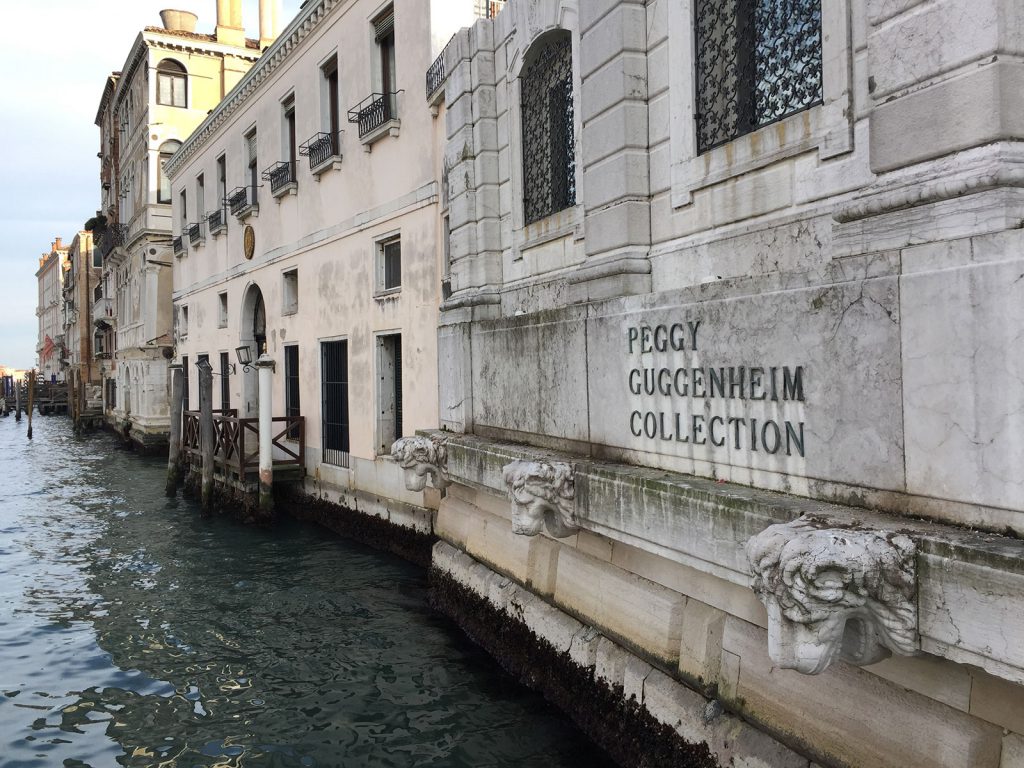 Peggy returned to Europe in the late 40s and shared her private collection at the 1948 Biennale in Venice, introducing the continent to New York’s abstract expressionists, alongside her broad collection of surrealism and European modern art.

Peggy acquired Palazzo Venier dei Leoni shortly thereafter, where she made a home for herself on the Grand Canal in Venice and hosted artists and exhibitions, and set about the project of eventually endowing the city with one of its most popular museums. 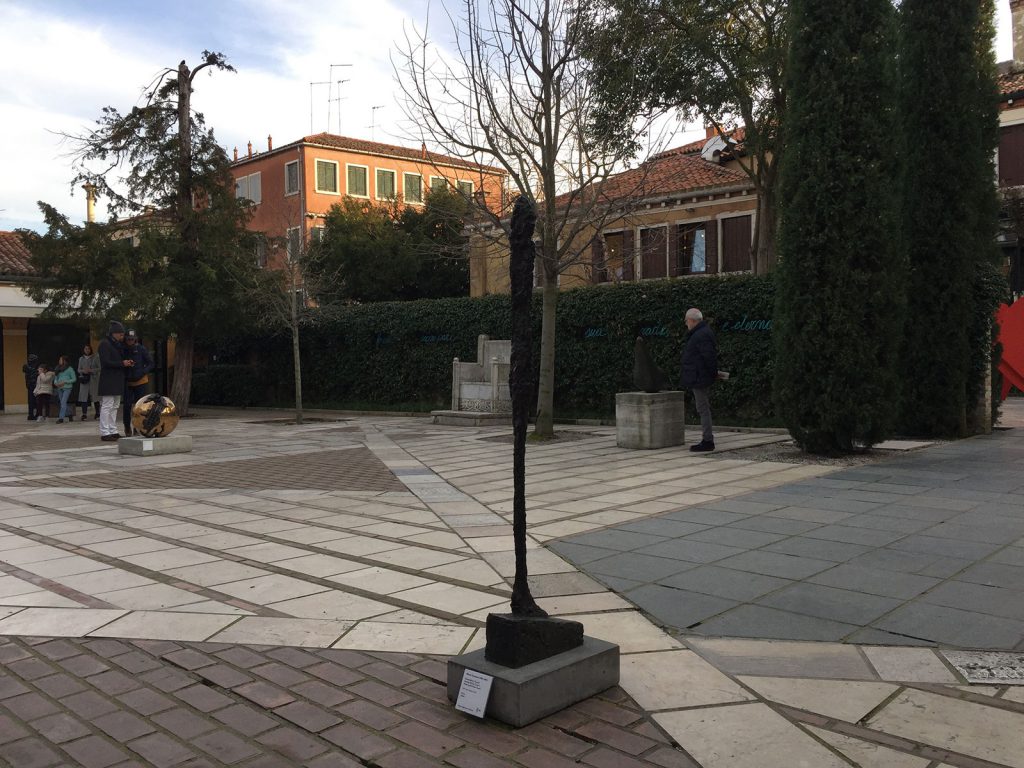 Step into the gate of the palace courtyard and you’re immediately in a different world, surrounded by sculptures like this Giacometti and newer works of minimalism. It’s a serene and harmonious mix of quiet benches and compelling art.

The Peggy Guggenheim Collection is a gorgeous museum and offers a nice respite from the city’s Gothic grandiosity. Here’s a peek at the property and some of its treasures. 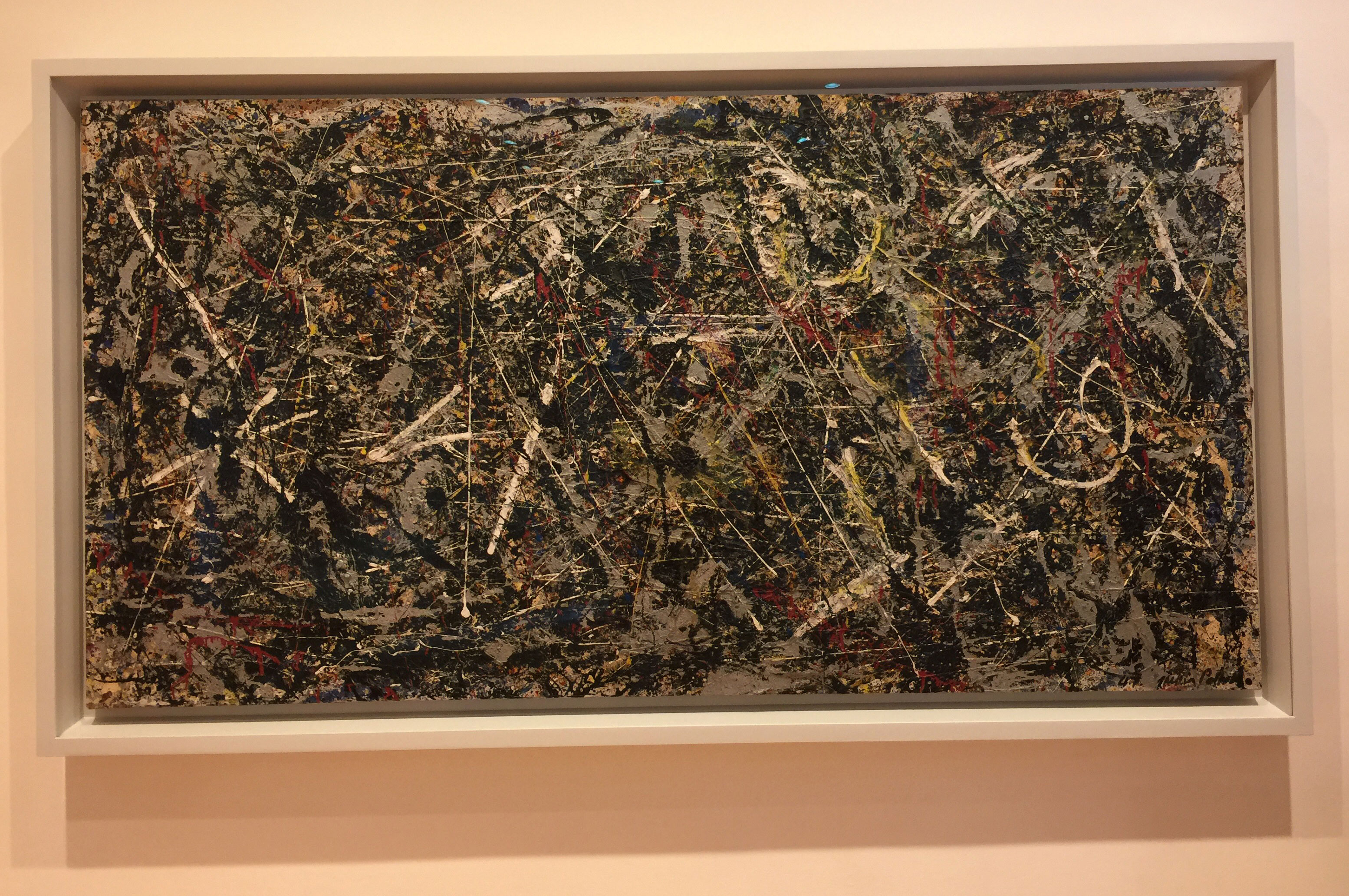 Peggy Guggenheim was an avid collector of the American abstract expressionists. She was an early and ardent patron of Jackson Pollock and retains some of his best works in her private collection. After helping launch his career in New York and the US, she famously introduced the European art world to Pollock at the 1948 Biennale in Venice. 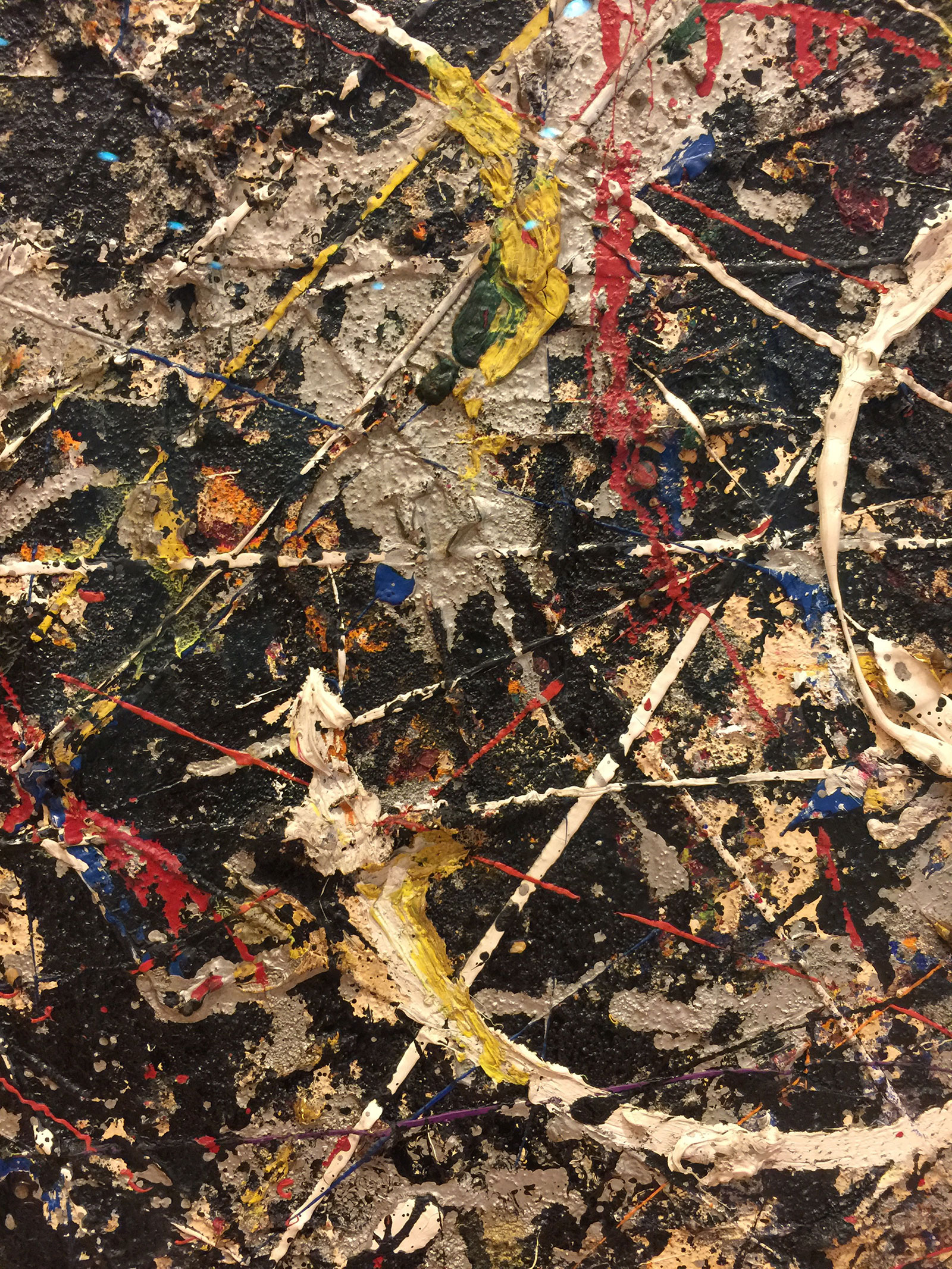 On a recent visit to the museum, a docent told me that Pollock layered the paint so thickly on this particular canvas that wet paint was discovered among the layers when the piece was cleaned by preservationists. 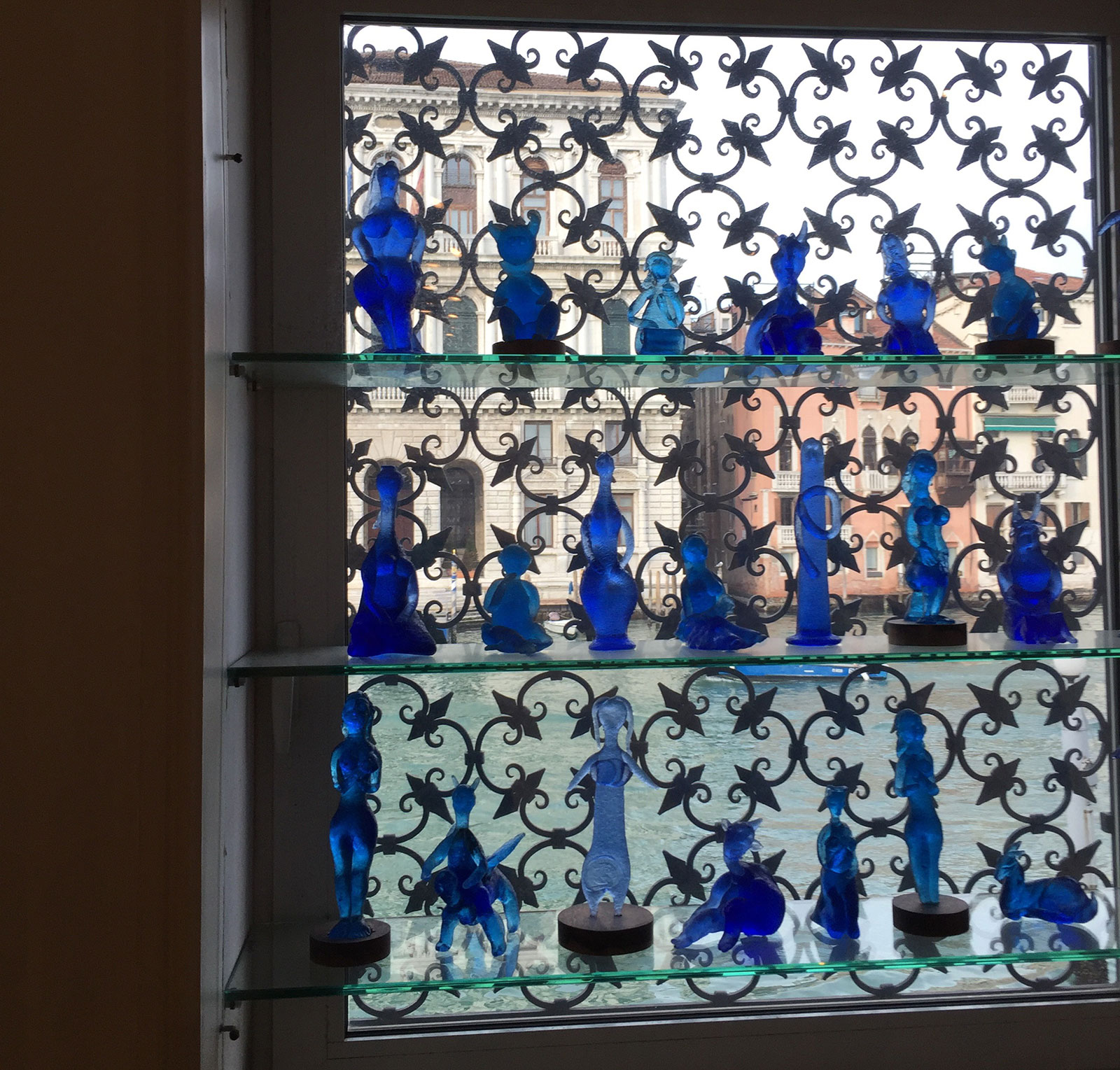 The palazzo setting is grand enough to almost compete with the art. Of course the experience is more harmonious than that and leads a visitor to daydream about Peggy’s parties and the artists who passed through these rooms. The glasswork above was designed by Picasso. 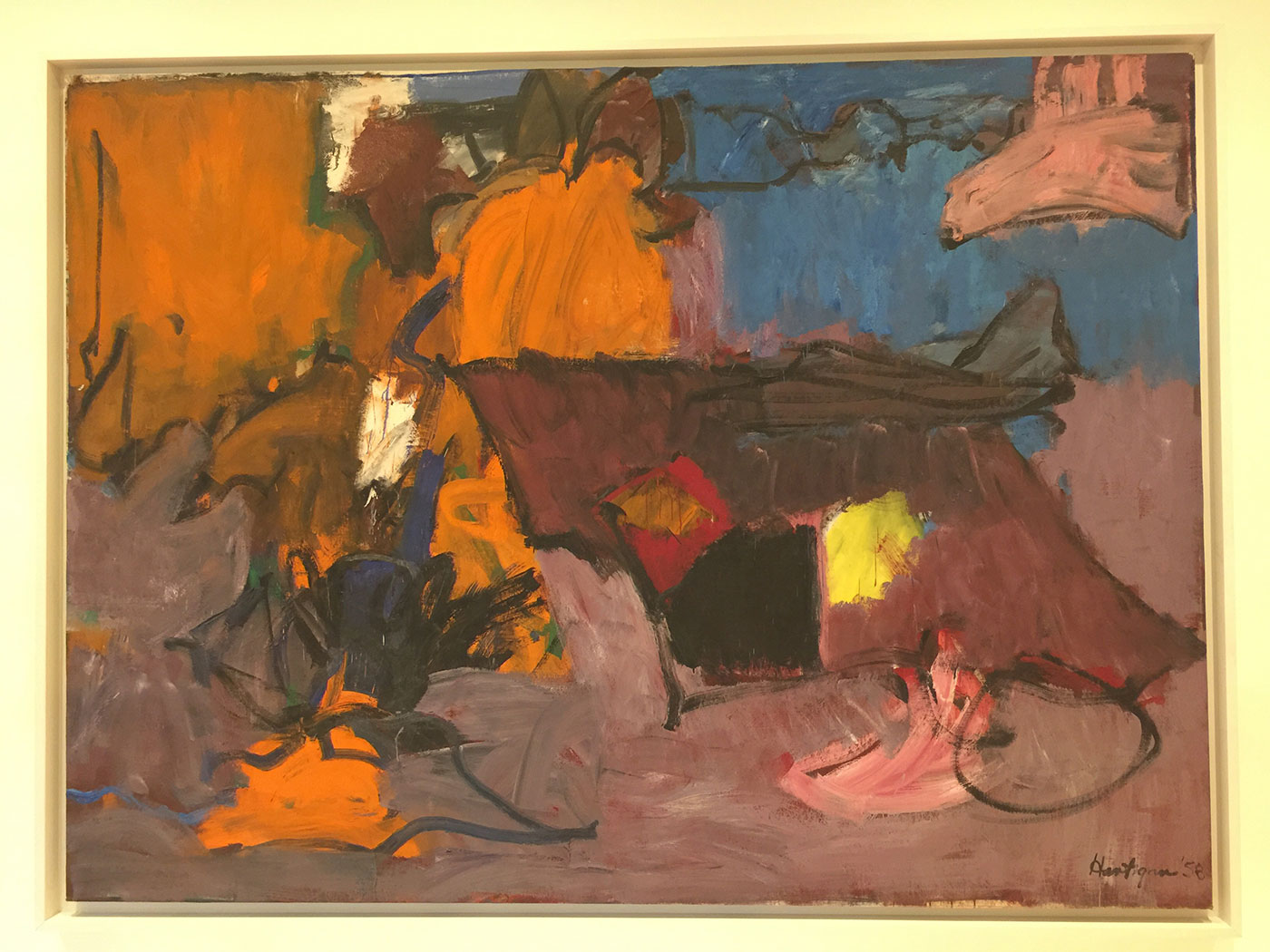 Peggy had a mixed relationship with some of the leading female painters of the Abstract Expressionist movement, as readers of Ninth Street Women will know well. Lee Krasner considered her a misogynist even as her husband accepted her patronage. She did buy a few pieces from notable women, though, like this piece by Grace Hartigan. 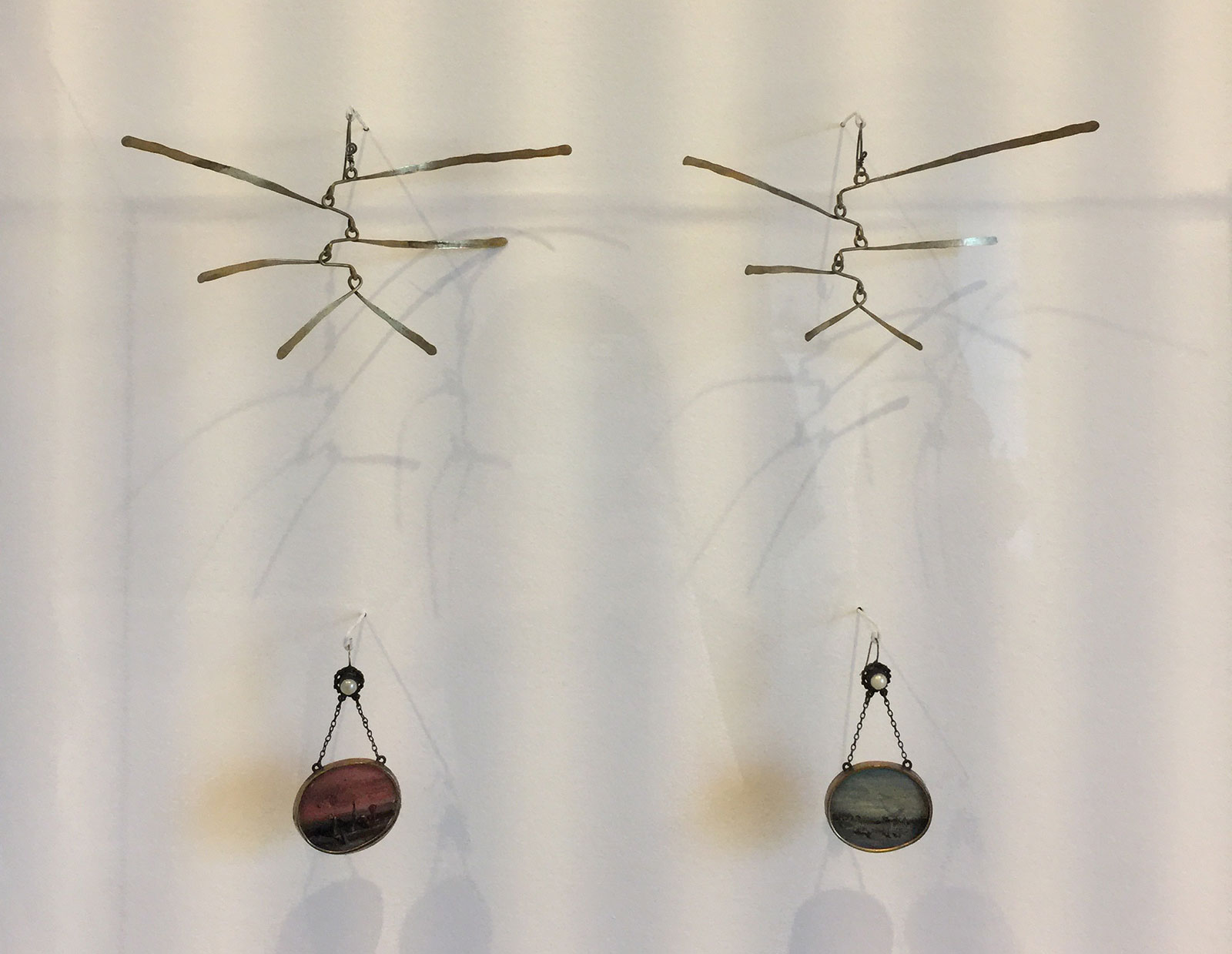 Of course Peggy was so well connected, some of the 20th century’s greatest artists made her jewelry, like these one-of-a-kind sets of earrings by Alexander Calder and Yves Tanguy. Just stop for a minute and imagine wearing your own personal Calder mobiles! Calder also made her a headboard for her bed that is absolutely exquisite.

Peggy had an affair with Yves Tanguy, among others. She famously wore one of each of these earrings to an opening at her Art of the Century gallery in New York to demonstrate her equal love of Abstraction (Calder) and Surrealism (Guy). 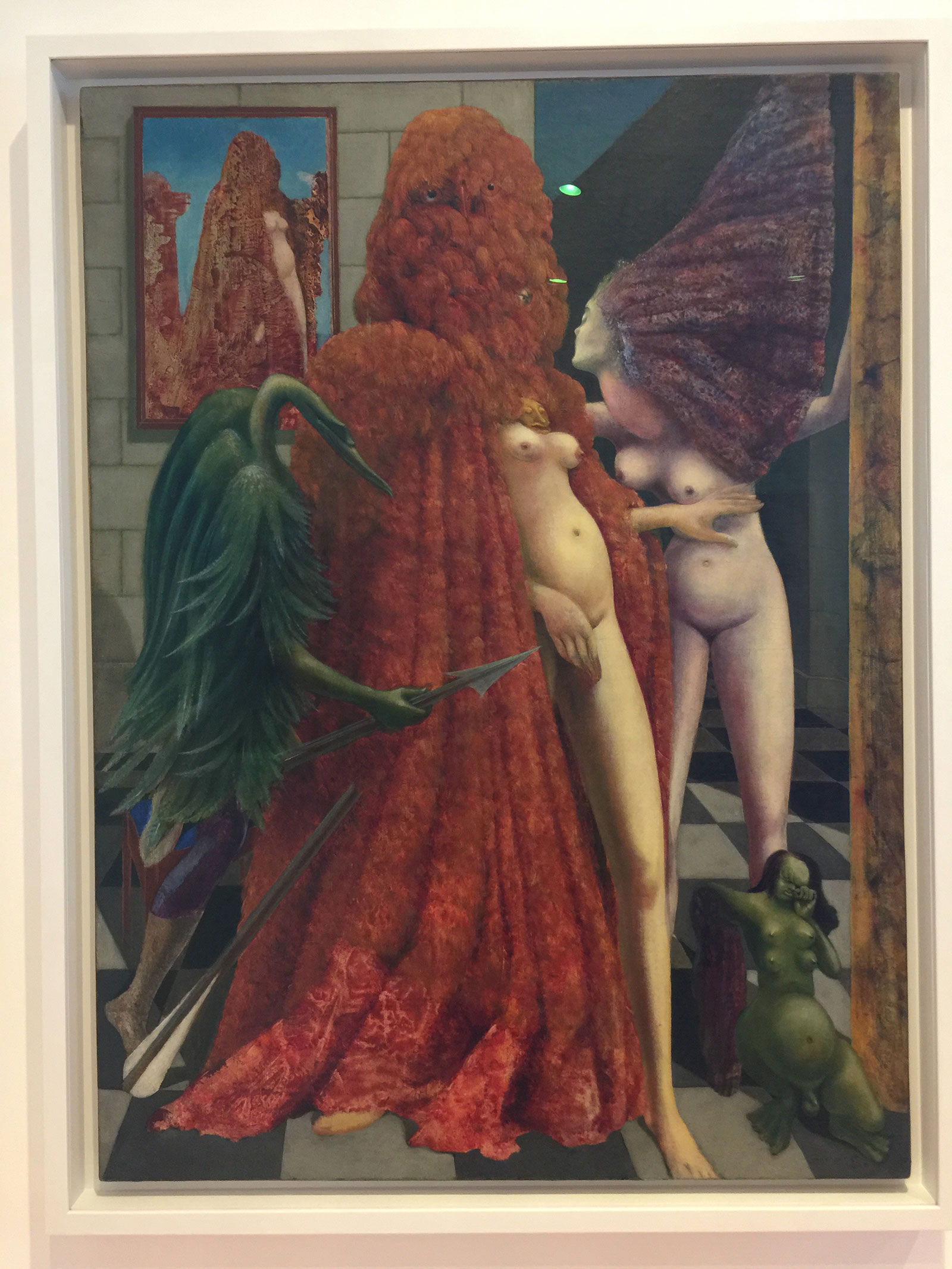 Peggy’s tumultuous second marriage to Max Ernst is captured in her collection in Venice, which displays a couple of his more important works. The figures in his paintings are subject to many complicated interpretations that speak to the complexities of their relationship and its infidelities. Peggy was notorious and outspoken in her romantic and extramarital affairs and flings. She documented the private and public in her memoire Out of This Century: Confessions of an Art Addict. 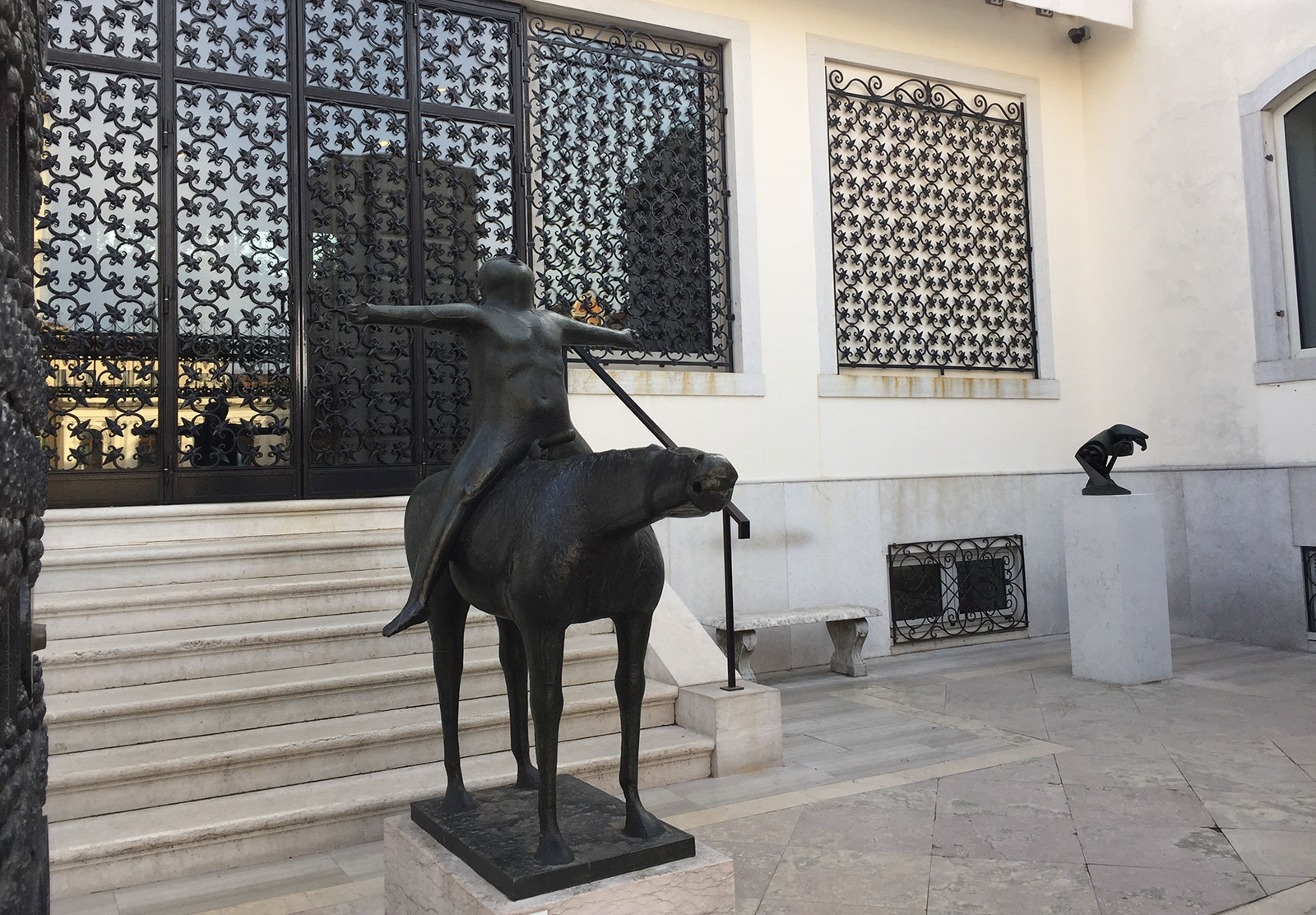 Marino Marini’s sculpture The Angel of the City is a city landmark, a notable symbol of virility parked on  Peggy’s canal front terrace. His forms are inspired by Etruscan statuary. In her book The Shock of the Modern, Francine Prose says that the horse rider’s phallus was detachable and could be removed should nuns happen by. 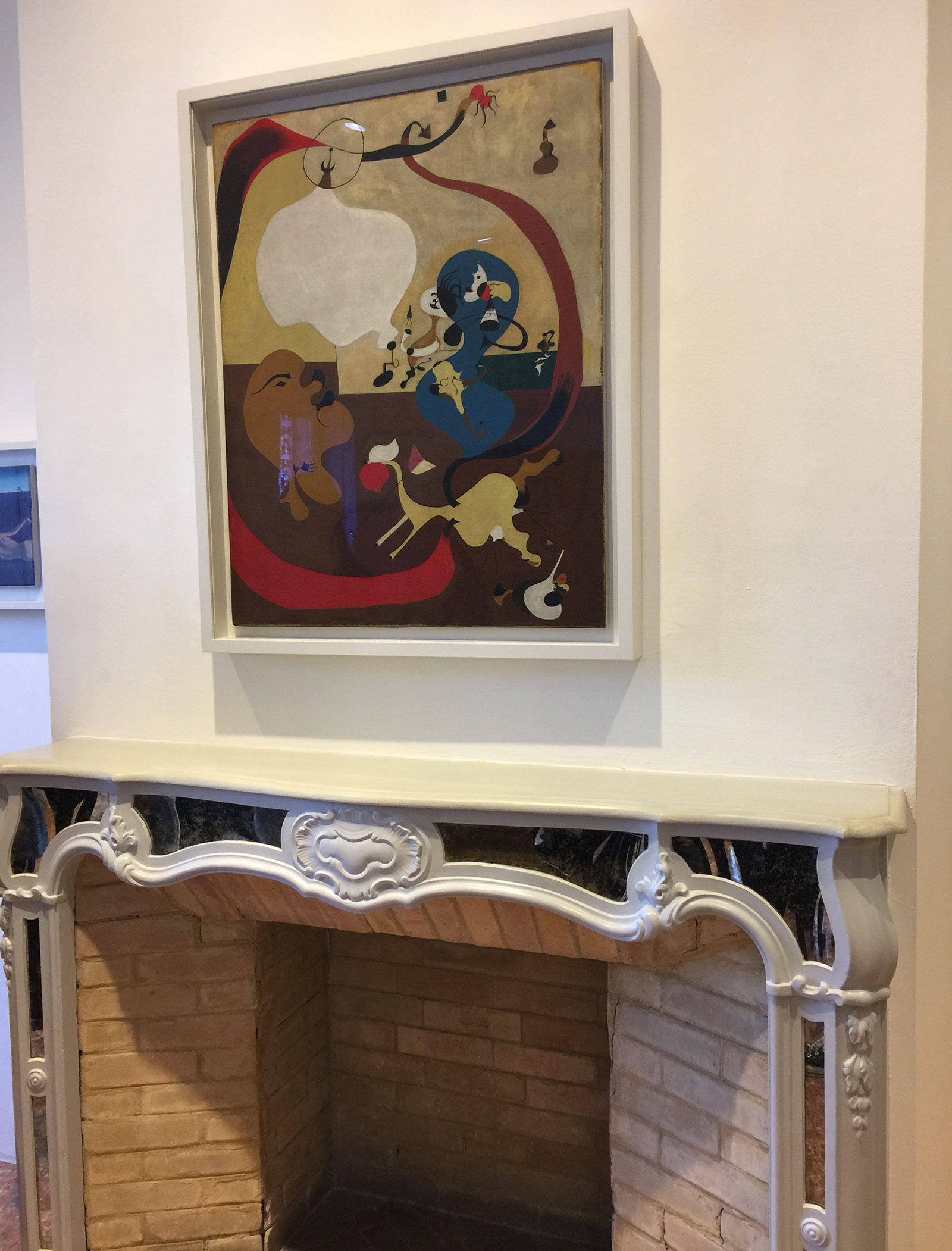 A little Joan Miro above the fireplace adds a cozy touch. Peggy was in the right place, at the right time, and with the right inheritance to secure masterpieces straight from some of Europe’s most important artists. (Cash and carry!) It was in the early 50s that Peggy started to open her palazzo for visitors to view her art. 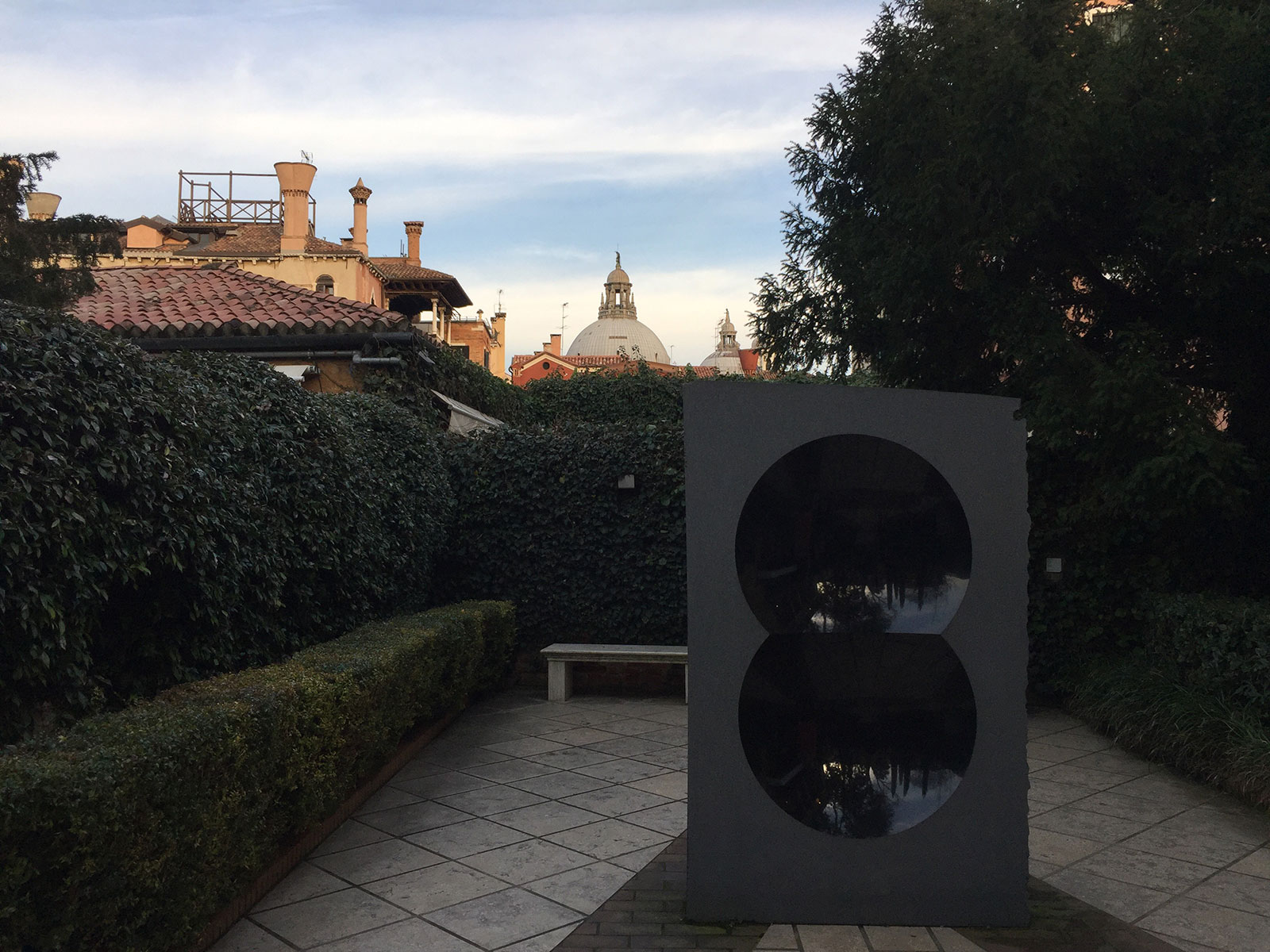 Learn more about the Peggy Guggenheim Collection on the museum’s website, where you can sample some of the collection and read more about the woman herself, her circles, her time in New York, and her contribution to the development of Abstract Expressionism.

And of course, you should plan a Venice Untour so that you can see the collection in person and experience all of Peggy’s vision in her palazzo and gardens.