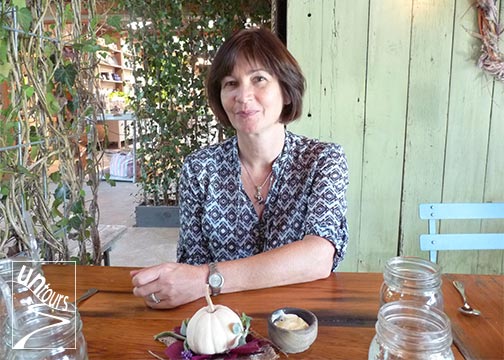 Cathrin Baumbach has worked for Untours since 2001 and is a Jill of all trades here. She began her Untours career on the Swiss Team and has gone on to run what we affectionately call the Boho (Bohemian) Team, covering our destinations in Austria and Germany, along with Prague and Budapest. She also runs the Greek Untour and recently helped us set up our Untour in Istanbul. I’ve always thought of Cathrin as a woman about town, here in Philadelphia and its surrounding counties. Similarly, she makes the most of her travels abroad, with Prague ranking at the top of her list. We recently asked Cathrin to shares some of her favorite things from her travels there.

What is something you are sure not to miss when you have the chance to return to Prague?

Where to begin? The beauty of Prague, apart from its architecture and setting by the Vltava River, is the compactness of the historical Old Town, allowing visitors to cover a lot of territory in a relatively short amount of time. I always make sure to stroll across Charles Bridge and visit Wenceslas Square at least once. The Jewish Quarter, with its synagogues and the old cemetery, also seem to have a magical pull on me.

Like in any other country I love to go food shopping. Unfortunately with globalization, Coca Cola, Kellogg’s, and Heinz are everywhere, but there are still many local products, like the famous Czech oblatky (big filled wafers), smetanovy yogurt (super rich and creamy), and Picnic (condensed milk in tubes).

I also make it a point to ride the subway. It will probably strike most readers as quite bizarre, but I admit that I am crazy about the Prague metro announcements.

How is Prague different from our Untours in other European cities?

Walking around Prague is like visiting an open-air museum. Prague has a very special place in my heart. (Budapest too.) Born and raised in former East Germany, Western Europe was closed to us. However, we could travel east. So most summers since we were 16, my best friend Kerstin and I would take a train to the Black Sea coast of Bulgaria and eventually work our way back to Germany through Hungary and the Czech Republic, always stopping in Prague.

I can’t imagine anyone not falling in love with Prague. It’s magical, romantic, and has a medieval flair. The architecture is right out of a movie set; in fact numerous movies have been shot in Prague since the Velvet Revolution. Prague abounds in spires and, not surprisingly, has been called the &dlquoCity of 1000 spires.&drquo

What are your favorite neighborhoods/sights in Prague?

I like Old Town with its historical sights (Old Town Hall and the astronomical clock, Charles Bridge, the Municipal House with its Mucha murals), cobblestoned streets, and beautifully restored buildings. For the most part, it has an intimate and romantic feel, but it can get very crowded due to its popularity.

Mala Strana on the other side of Charles Bridge is less crowded and has a lot to offer. It’s a wonderful area for a meal, a stroll, and sightseeing, like the famous store signs on Nerudova Street. Prague Castle, probably the city’s most popular attraction, and the views from there never cease to amaze me. Located on a hill overlooking the Vltava River, the castle has been the seat of Czech rulers for 1,000 years and today houses the office of the president.

What is your favorite thing to do in Prague when you have leisure time?

I love to wander and relax in the wonderful gardens of Prague. I think they are one of Prague’s best-kept secrets. They are typically not very large, so they feel intimate. Some are free, some charge an admission. My favorites are Wallenstein Palace Gardens (in Mala Strana, free), Vrtba Garden (Mala Strana, on the UNESCO World Heritage List, charge), Castle and Palace Gardens (Mala Strana, charge).

I like to treat myself to coffee & strudel in the art deco cafe of Municipal House.

What are your favorite local food and drink?

I definitely like Czech beer (the darks are my favorites), but I have also recently discovered that the country makes decent wines. Prague is proud to have its own brewery, Staropramen, which can be visited. Of course, there is no shortage of beer halls where you can  mingle with the locals and other tourists. Being mostly vegetarian, I don’t have the easiest time in the Czech Republic, but I do love knedliky (bread dumplings) served with cabbage and a bit of gravy. And the pastries are pretty hard to resist.