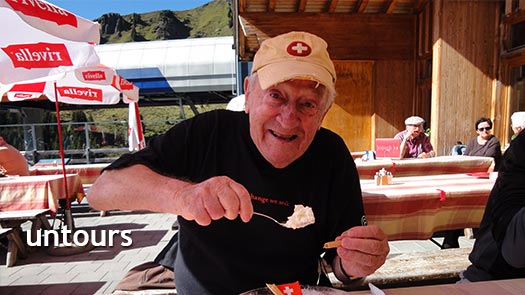 Harold Taussig Sr. passed away on the afternoon of January 11, 2016 in his home. He was 91 years old.
Hal was an accomplished businessman, a fervent booster of Fair Trade, an activist for socially responsible business, and an early micro-enterprise investor. His Untours Foundation, created with the profits of his successful tour company, has lent over 7 million dollars to small startups and businesses around the world to create jobs and economic opportunities for those most in need.
Hal understood what it meant to build a business from the ground up. He started Untours with a loan from a friend, running it with his wife Norma from the bedroom of their small apartment in the 70s. 40 years later, the company continues to offer a mode of travel that Hal pioneered: apartment stays in local communities in Europe that give travelers a more genuine experience and understanding of a place, its people, and its culture.

Hal grew up in a Colorado ranching family, and his love of the countryside never left him. Serving in the Army Air Corps, he went to Texas, where he met his wife Norma. They married, and after Hal completed his BA, they settled in Colorado. After a brief stint as a “failed rancher” in Hal’s words, he went on to teach in the local school district. He and his family moved in the following years, as he continued in various teaching positions and pursued his masters and then a doctorate at the University of Pennsylvania.
During this last phase of his teaching, he traveled with his wife and youngest daughter to Europe for a sabbatical. He was able to stretch the family’s extremely tight budget by renting apartments in small villages in Switzerland, Germany, and France. At home in rural mountainside communities, he became an avid hiker, learned German, and made lifelong friendships that altered his worldview.
By traveling close to the ground, taking local trains, shopping in the markets and getting to know a series of friendly hosts, he found what he considered a more meaningful and enlightening mode of travel. This cross-cultural connection prompted him to write his book Shoestring Sabbatical hoping to inspire others to travel this way.

After his teaching career wound down, Hal parlayed his travel philosophy into a small business, started at his kitchen table with the help of Norma and a small circle of friends. In 1975 they sent their first clients to stay in chalet apartments in the Swiss Alps. An early PR score with the LA Times helped launch the company. The package linked Americans with overseas apartments, rail passes, and helpful local hosts to support them on self-directed adventures and day trips.
Soon a high number of repeat customers formed a community of devoted “alumni” who helped spread interest by word of mouth. Over its four decades in business, the company has grown to offer Untour programs in 24 destinations in Europe. Hal directed the company and its growth into the 90s.
Slightly overwhelmed by the company’s financial success and uninterested in amassing personal wealth, Hal experimented with profit redistribution in the early days of his business’s success. First he sent refunds to stupefied customers, then he experimented with a flat pay scale and profit sharing with his small staff.

In 1993, Hal and Norma settled on another plan, using company profits to create and sustain the Untours Foundation (then called the Idyll Foundation). The foundation invests in projects and startups that create economic opportunities to alleviate poverty.
Through low-interest loans with flexible terms, the foundation funded projects as diverse as the Landless Workers’ Movement in Brazil, early imports of Fair Trade coffee to the US, and a vegetarian restaurant in Ho Chi Minh City that provided job training to get kids off of the street.
The foundation has funded a number of local projects, including Homecare Associates, a worker-owned home healthcare company. Hal set his sights on the economically challenged community of Chester, PA, investing heavily with the Reinvestment Fund and working with local entrepreneurs to foster businesses and investment in this nearby community.
In 1999, Paul Newman and John F. Kennedy Jr. awarded Untours with the title “Most Generous Company in America,” and Newman’s foundation backed it up with the first of many grants.
Hal described his mission as offering “a hand up, not a hand out.” In later years, his focus moved to supporting business models that had benefits beyond job creation and that could be replicated. Current examples include Philly Compost, Ecozoom, and Wash Cycle Laundry, a Philadelphia-based eco laundry service that has since expanded to Washington DC.

Friend Ben Cohen (of Ben and Jerry’s ice cream) said “What makes Hal so special is that he combines real kindness and compassion with that practical business side, and that, I think, is the key to making a difference.”
After a long history of activism in Social Venture Network and advocacy for sustainability and raising the minimum wage, Hal inspired the B Corp (Benefit Corporation) movement, and Untours was a founding B Corp. The movement’s leaders created the annual Hal Taussig award in his honor.
He was given the Spirit of Philadelphia Award in 2007 and at the following year’s Philadelphia Sustainability Awards, Hal was presented with the Lifetime Achievement Award for his ongoing commitment to social justice.
Within the local community, Hal and Norma were given the Community Service Award from the Media Borough Council and the Marie Whitaker Humanitarian Award. An early supporter of the Fair Trade movement, Hal’s vision prompted Media to become America’s first Fair Trade Town.
Hal has lived simply in the same small house in Media since 1986. Up into his 80s, Hal could be seen out in the neighborhood, riding his bicycle to the office. Hal was proud of not owning a car. Throughout his career, he preferred jeans, T-shirts, and a thrift store cardigan to a business suit. His commitment to simplicity included refusing to take a salary from Untours and living on Social Security.
He was a member of the First United Methodist Church, and his faith life remained very important to him throughout his life, fueling his interest in social justice.
Hal’s vision and generosity will live on for decades to come. Many of the businesses his foundation helped launch are thriving. And his ideas and ideals will continue to inform and direct the growth of Untours.