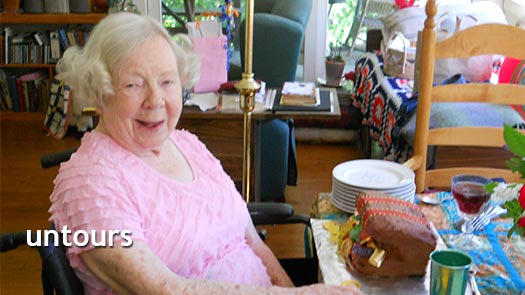 It is with great sadness that we report our co-founder, Norma Lee Taussig (Black) has passed away. She died July 22, 2015. She was 92.
Norma helped found Untours with her husband Hal 40 years ago, and they blazed a trail as pioneers in the industry with their apartment-based, cultural immersion travel.
Norma also helped found the Untours Foundation, which invests company profits in the community, providing low-interest loans to help create jobs and opportunities in economically challenged communities abroad and at home.
Norma’s understanding of poverty was shaped by personal experiences from childhood. Her memories of growing up in the Texas panhandle were shaped by what she called the 3 Ds: Dust Bowl, Depression and Dreams. Though her family’s life was hard, she had fond memories of creativity in scarcity, admiring her mother’s clever thriftiness in sewing feed sacks into dresses and turning socks with holes into mittens.
She recalled her father’s insistence on paying his farm helper a wage that allowed him to live as well as they themselves lived. Her father was half Cherokee, and Norma remained interested in Native American culture throughout her life, including in later foundation investments.
Norma put herself through business college, working part of that time as live-in help for a wealthy family. She also shared a small apartment with her sister and her family. In the time that followed she worked in a bank and felt pride in her ability to support herself in the workforce and make a good wage.
She met her husband Hal at the First Baptist Church in Amarillo. They soon married and moved to his native Colorado, where they tried their hand at ranching. She worked hard in those years, as she raised their young family and oversaw the ranch, especially after Hal got a local job teaching to supplement the family income.
They settled in Pennsylvania as Hal’s teaching career continued and he pursued a doctorate at the University of Pennsylvania. Norma worked for years as a secretary for the Delaware County Intermediate Unit.
Always savvy with finances, she helped Hal start Untours in the 70s and kept the books for their growing company for many years to follow. In 1993, as the company’s profits boomed, she helped Hal found the Untours Foundation. Norma strongly supported Hal as he expanded the foundation’s reach, and as he said, “She often led the way.”
Norma was an early booster of nearby Chester, PA, and advocated for loans within this economically challenged community. She led the foundation to back a dozen or more projects in that area, wanting to provide a truly local focus.
Not long after her retirement, in 1999, Norma suffered a devastating stroke that left her partially paralyzed. In the months and years that followed, she engaged in a rigorous physical therapy regimen and worked tirelessly to restore movement. Though she used a wheelchair, she re-gained more mobility and ability than doctors expected.
In working with a number of home health care aids over the years, she developed an interest and concern in the fair treatment and pay of agency workers. She was startled to learn how little of each dollar she paid for her care actually went to the person helping her.
This led the foundation to invest in Home Care Associates of Philadelphia, a worker-owner agency that provides health care services to those like her who remain in their homes after health setbacks. Many of the company’s employees have left welfare to work for the agency.
Norma was a practical woman who embraced simple living and frugality as if it were mere common sense. She and Hal lived in the 2-bedroom home they bought in Media in 1986. They were engaged in their community, active members of the First United Methodist Church. She and Hal were given the Community Service Award from the Media Borough Council for their local work on fair trade and economic justice.
Norma was an avid reader. She read a novel every day or two in her first couple years after retirement. She sewed for thrift and pleasure and was interested in gardening.
She also enjoyed writing. In a lean year in the 80s, she wrote an essay about her memories of holidays past and gave copies of it to her children as their Christmas gift. Along with wry and thoughtful stories of hard and happy times, she wrote, “May God continue to bless and help us all to grow to what we should be in the sight of the Creator.”
We will miss Norma terribly. As we mourn, we know her practical wisdom, generosity and spirit will continue to guide our organization.
We welcome you to share your memories and thoughts.