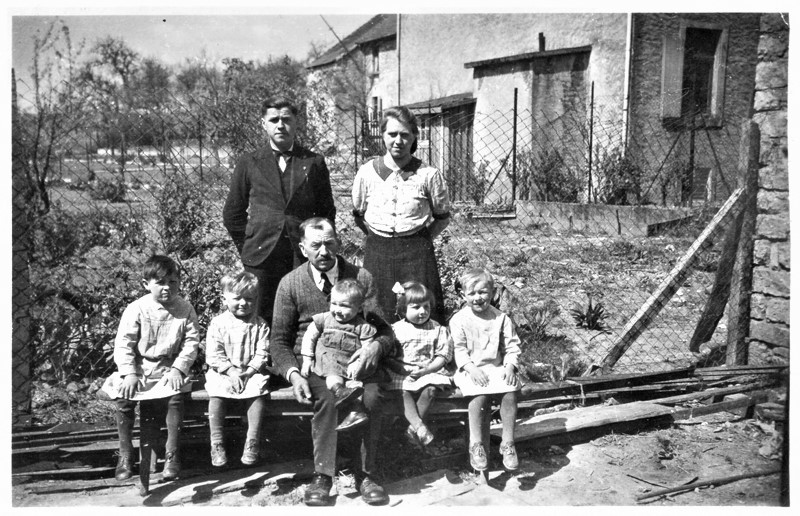 Untourist and Untours Foundation supporter Jerry Nolan recently shared this touching story with us, about his memories of WWII and his return to France to reconnect with a French family he befriended.

In October of 1944 the U.S. army shipped me to Europe to go to war. My nineteenth birthday passed almost unnoticed on the high seas. I wasn’t complaining. If I had been born a few months earlier, the U-Boat menace to Atlantic convoys would have had my knees knocking, but now we made it safely to Marseilles. 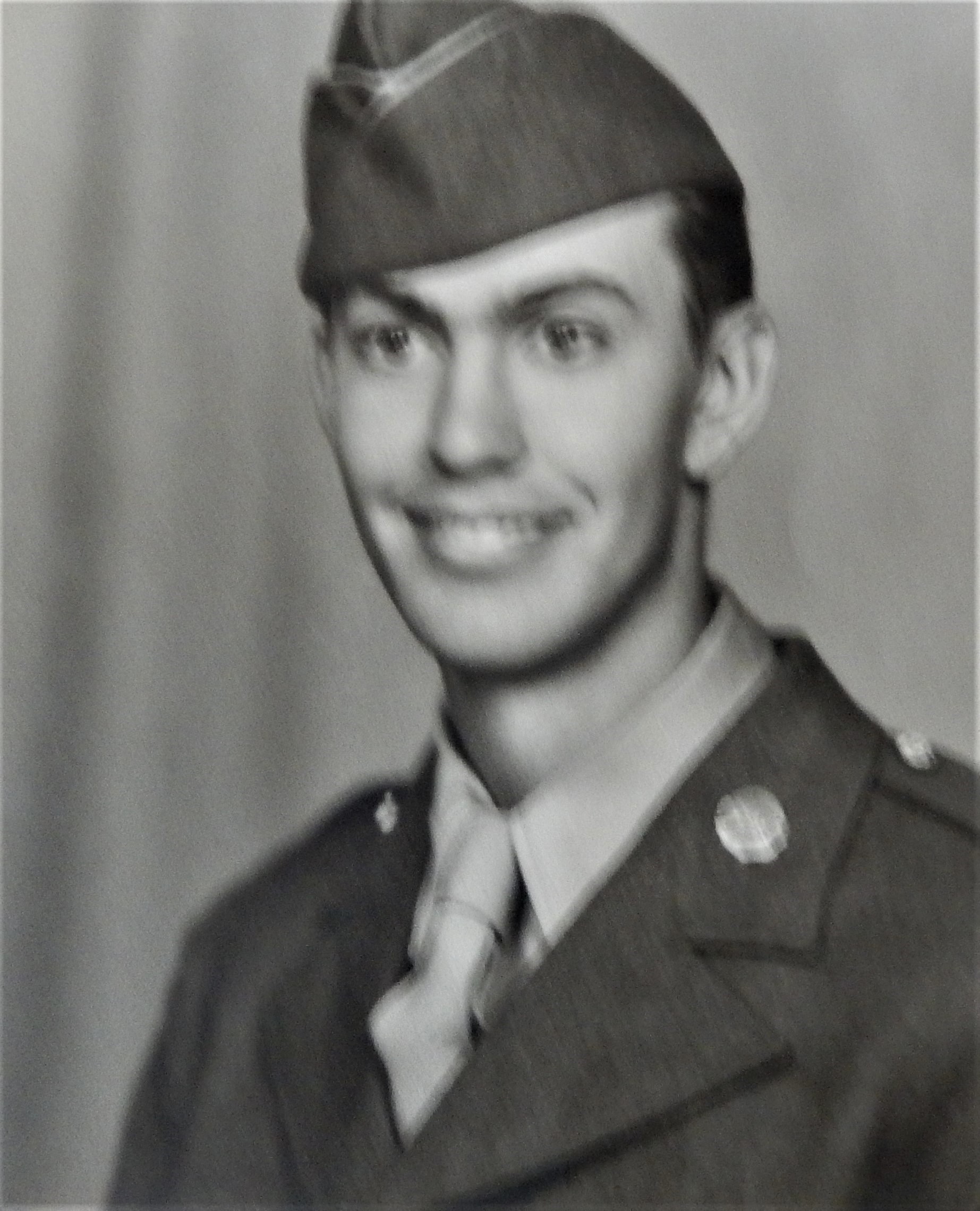 Had I been born even a month earlier, I would have been sent directly from basic training as a replacement. We all knew whom those unlucky guys were replacing: dead soldiers.

Instead, to get me to nineteen, I was trucked to Texas to join the new 103rd Infantry (Cactus) division which was then forming. Once there, a stroke of luck in a count-off placed me as an anti-tank gunner rather than a rifleman. I didn’t realize until later what a huge effect that would have on my life.

Having landed unopposed, once our gear had been unloaded and the division formed up, we were taken across the length of France by truck to the provinces Alsace and Lorraine where we replaced the battle-weary Third division. When we crawled into their vacated fox holes, we learned that we were in the Voges, the mountainous spine of those provinces.

The first bit of luck was that tanks could not operate in those mountains and I never fired my anti-tank gun. The second was that in the army organization of that time, the anti-tank platoon was attached to battalion headquarters. 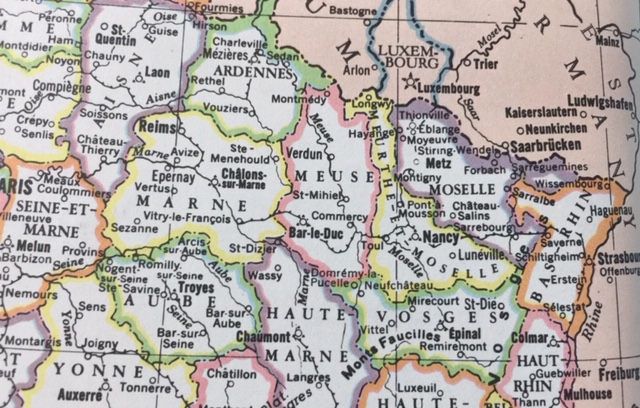 Because Germans settled these areas in antiquity even though they were handed back and forth between Germany and France with the fortunes of war, the native language was still a German dialect, and most people could speak high German, the language I spoke.

I talked to the people as often as I could and my plan worked! Someone from headquarters heard me and I was taken from the anti-tank group and placed in the three-member Intelligence and Reconnaissance Squad of the battalion.

As I was the sole German speaker I found myself the battalion interpreter. I did learn a bit of the local dialect. My duties were simple. I interrogated German prisoners as needed, I asked directions if we were lost, and best of all, since battalion headquarters stayed in the towns as we cleared them, I arranged our accommodations with the villagers.

I never slept in a foxhole again and I traded my heavy MI rifle for a lighter 30 caliber carbine. The people were happy to accommodate us, as we were liberating them from the hated German occupation which had been in place since the beginning of the war.

Speaking and teaching French was prohibited, French books were contraband, and a man wearing a beret could be shot. As a reminder, there was a little known full scale concentration camp with gas chambers operating in Lorraine.

Rationing was strict and such commonplace items such as coffee, sugar and meat were
impossible to come by. All this went on for the rest of 1944. 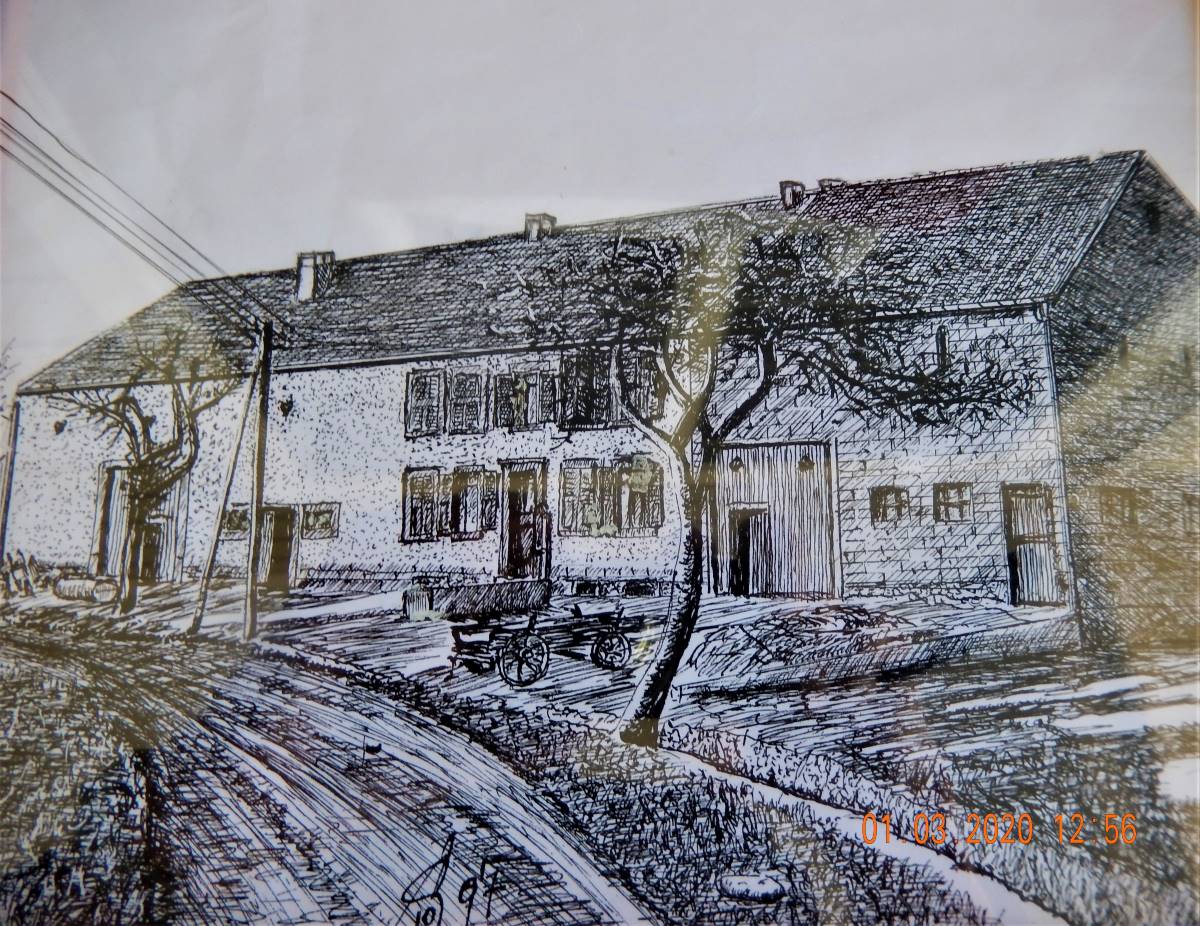 Near Christmas, the Germans made their last major assault far north of us in the Ardennes of Belgium. We were in the town of Rouhling in Lorraine, as reserve, quite near the German border. I arranged quarters for my group in a farm house with a family named Fersing.

It was a large family but there were two siblings near my age, a young lady named Philomene and her brother, Etienne and we three bonded. They invited us to share their Christmas dinner. There I was, warm and dry and looking forward to a Christmas dinner rather than freezing in the snow fending off the Germans near Bastogne.

I have no idea what was on the menu. I assumed the Fersing family found some food on the farm and I swiped what I could from the army. I know what was for dessert: The family had found some canned peaches. I got flour, sugar, and milk from the mess hall. My mother had taught me how to roll a pie crust and how to bake, so we had a peach pie — their first!

After the first of the year we had to move on. I wrote to my mother and asked her to send a care package to the Fersings, and said Auf Wiedersehen to this fine family. 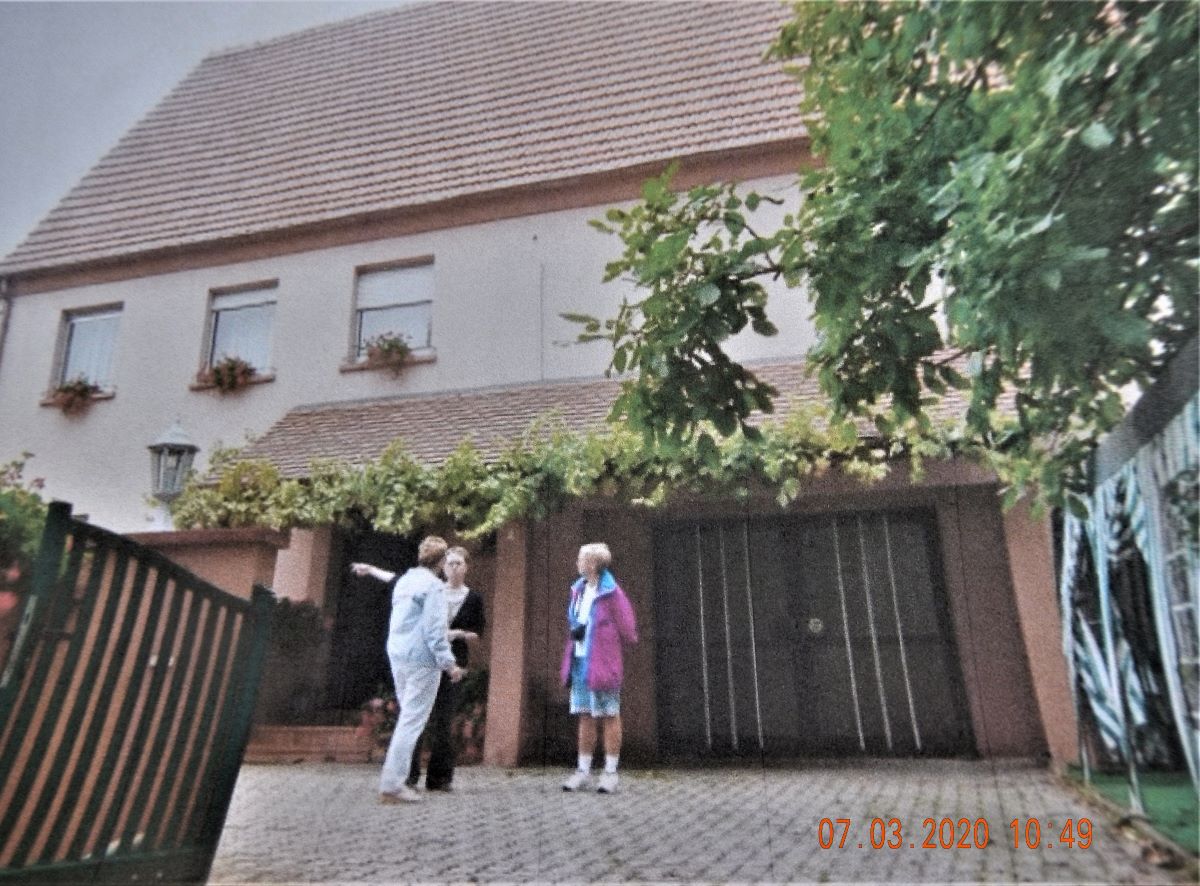 Fast forward 63 years. Sandy and I had fallen in love with Switzerland and we were accustomed to spending a few weeks there in the summer with Untours.

In 2008 we found that Untours also offered an interval in Alsace. It was easy to get from Switzerland to Alsace and I thought it would be fun to tack that onto our Swiss stay and see that area once again. While there I decided to find our way to Rouhling in Lorraine. 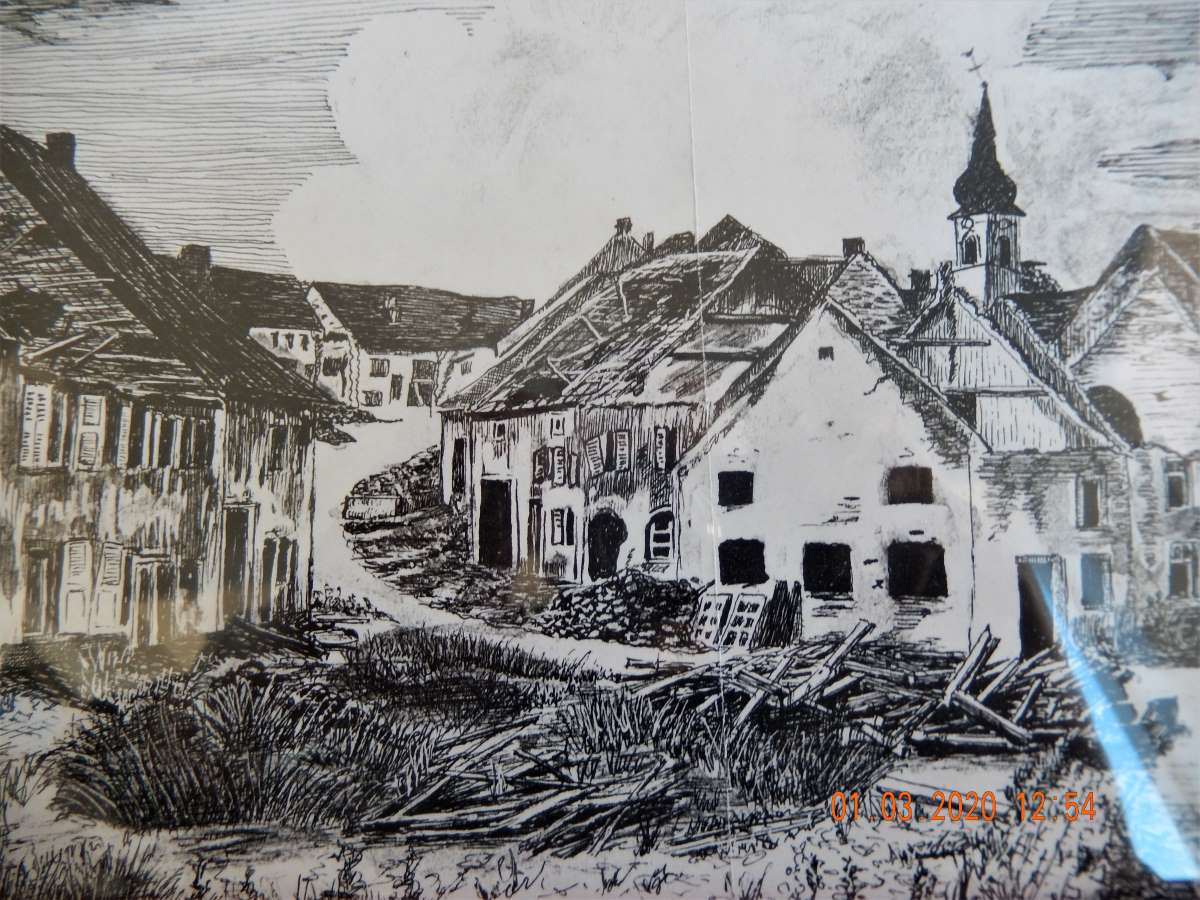 Sandy warned me that everything would be different and I might not connect at all. When we drove into the town, I feared she was right. Nothing looked familiar. The last time I saw it it was the worse for war, but now it was neat and tidy.

We found the mayor’s office and gave it a try. Luckily, the young lady at reception spoke German and I explained our mission. She became very excited and told me that the generation of the Fersings I knew had died except for one elderly lady in a near-by nursing home.

But, amazingly, the daughter of my old friend Etienne lived just down the street and said she would like to see us. First, we had to meet the mayor, have our pictures taken and a story written for the local paper. I mentioned above that we had been regarded as heroes. They have not forgotten.

We met Mariette and her husband Josef. I had worried that it might be awkward, but we were warmly welcomed and Mariette insisted that her father, Etienne, spoke of me often and of the time I was with them in the war.

They gave us a nice lunch with plenty of wine. Then she took us to see the very house I had lived in (photos) which a cousin now owned. We then visited an elderly artist who had done etchings at the time of their liberation and offered us our pick.

Finally, we went to the nursing home to visit Josefine, the surviving sister of Philomene and Etienne. There was nothing wrong with her mind. I had brought pictures of her siblings. I missed her in 1944 because she was married and living off the farm. I gave her the photos and a letter Philomene had written to my mother thanking her for my service and for the package mom had sent which contained foods they had only dreamed about.

When we left her, Josefine said when she went to bed that night she would dream about the Americans coming to save them. There was not a dry eye!

We said goodbye as we had to drive back to our “home” in Alsace. I considered looking for another village where I had made friends, but Sandy and I agreed we could never improve upon our return to Rouhling. Mariette and we have remained in touch to this day.