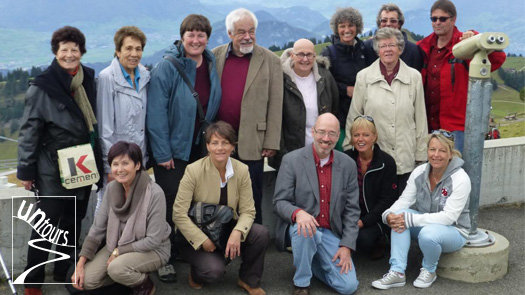 How many members of the Swiss team do you recognize?
Extra credit if you can name the three current staff members not pictured!

The sun and gray clouds were battling it out as I boarded the train to Lucerne from Meiringen on October 20. After winding up the mountain to the Bruenig Pass, my colleague Margrit boarded the train. She is the longest-serving Untours staff person in the world, having joined the company in the mid 1970s.

The train descended from Bruenig to Lungern, a lakeside village that was decked out in its fall finest. Marlies boarded there. Connie joined us in Sarnen. All of us were on our way to a rare all-Swiss (Heartland, Oberland, and Ticino) staff summit meeting at the top of Mount Rigi. 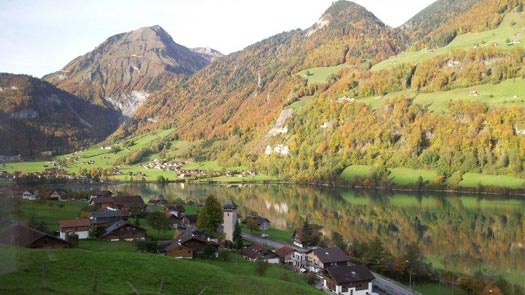 We walked out of the station to board the beautifully restored steamboat across the street. In the excitement of reconnecting with colleagues I hadn’t seen in years, I missed the view of the peaks at water’s edge sliding along outside the ship’s windows. It wasn’t until we boarded the oddly skewed mountain railway at Weggis that I started to notice the scenery again. The lake and villages receded into the distance as the train climbed to the top of Mount Rigi. The views of the valley and other peaks were spectacular. 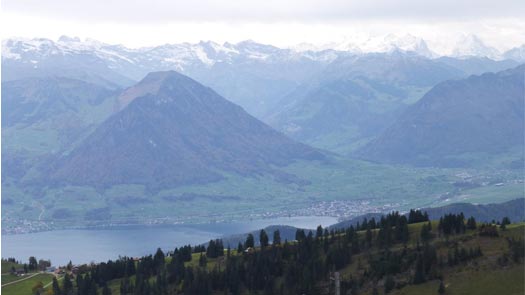 Realizing that the relatively clear view might not last long, we recruited a friendly stranger to snap our picture. In thrifty Untours style, we opted to eat at the self-service buffet rather than the pricier full-service restaurant. By the time we finished our lunch and 2014 planning meeting, the heavens had opened and it was pouring rain. 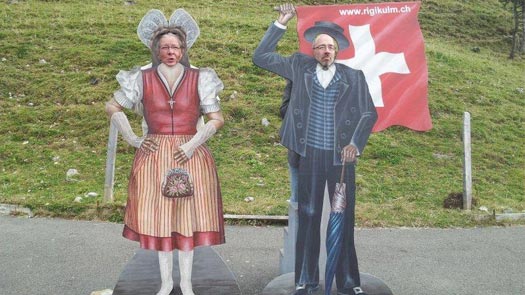 In spite of the wet finale, I was impressed at how excited the staff was about this trip. These are people who live with the beauty of the Alps right outside their doors. The fact that the entire trip, including boat and mountain railway was free with the Swiss Pass (included with every Swiss Untour) motivated several of the Heartland and Oberland staff to say that they would recommend this trip even more highly to their Untours guests in the future.

Bonus quiz:
Who is the 19th century American writer who wrote most memorably about his own experience on Mount Rigi? Here’s a sample…

Two sides of this place were guarded by railings, to keep people from being blown over the precipices. The view, looking sheer down into the broad valley, eastward, from this great elevation- almost a perpendicular mile- was very quaint and curious. Counties, towns, hilly ribs and ridges, wide stretches of green meadow, great forest tracts, winding streams, a dozen blue lakes, a block of busy steamboats- we saw all this little world in unique circumstantiality of detail- saw it just as the birds see it- and all reduced to the smallest of scales and as sharply worked out and finished as a steel engraving.