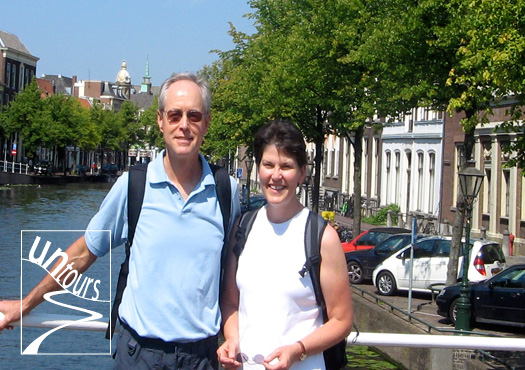 We spent a week in each of the three Untours sites in France: Provence, Alsace and Paris. We were by ourselves in Provence, but two friends met us in Strasbourg for the final two weeks in Alsace and Paris. The three regions were each so unique, it was as if we were visiting three separate countries.

Pernes-les-Fontaines, our Untours hometown in Provence, was our first portal into the past. It provided an excellent location from which to experience the influence of ancient Rome at such fascinating sites as the Pont du Gard aquaduct, the ampitheater at Arles, and the villa ruins at Vaison la Romaine, as well as that of the Papacy in Avignon during the Catholic schism of the 14th Century.

The wildlife of the Mediterranean coastal region in the Camargue provided a fascinating contrast. Bergheim, a quaint little village in the northeastern corner of France, was our second home base. In the heart of the lovely Alsatian wine country, in the foothills of the Vosges Mountains, it situated us among a delightful array of medieval villages surrounded by vineyards, which also provided easy access to Strasbourg (if for no other reason than to see the cathedral) and the Black Forest region around Freiburg, Germany (the Black Forest cake at the top of the gondola ride was worth the trip).

Our little apartment in central Paris (Lescot) was the perfect location for walkers, with virtually all the Parisian sites within walking distance; although we were only steps away from the marvelous Metro system, which was quite convenient for our day at Versailles.

I had been wanting to visit France ever since taking French in high school almost 50 years ago. We thought it would be interesting to experience a week in all three regions, rather than limiting ourselves to two weeks in just one region, as we had done in the past, in both the Swiss Heartland and Holland. Although this did work very well as an introduction to France, we must admit that we could easily have spent two full weeks at each location. There is so much to see!

It is hard to pick a favorite, as we have so many good memories of our trips to Switzerland, Holland and France. It was delightful to experience first hand the many places we had read about, heard about and dreamed about for nearly 50 years—the natural beauty of Switzerland, the artistry of the Dutch Masters, and the history and culture of France.

Foremost, an Untours experience gives us time to explore in depth a particular region of the world on our own schedule, not having to live out of a suitcase, knowing the apartments were carefully selected by the Untours staff.

(Side note: Before our trips to Holland and France, we enjoyed DVD courses from the Teaching Company—Dutch Masters: The Age of Rembrandt and The Cathedral—that enhanced our experiences by educating us before we left home about what to look for at our destinations.)

We appreciate the opportunity to live like locals in residential neighborhoods rather than in hotels catering to tourists. Having the security of knowing there is someone nearby in case of emergency is also reassuring. When there is a problem (as we had most recently in France, due to the air traffic controllers strike) we are grateful to have the assistance of the Untours staff (help with last-minute flight arrangements to replace the flight that was canceled, and being greeted at the Marseilles airport late at night after being delayed in Amsterdam for eight hours, then escorted at midnight directly to our apartment).