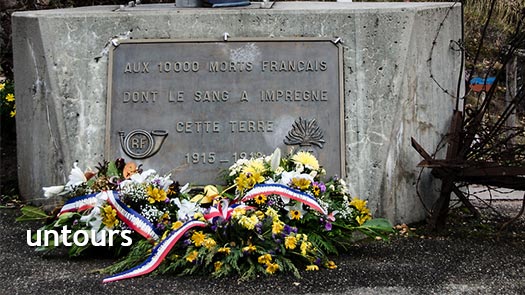 In part three of her series on Alsace, Sandra Kohler writes about Alsace’s history during the first and second world wars. She and her husband Walt (whose photos are featured here) have been on many Untours, but Alsace was an especially captivating region for them. The photos above and just below are of the memorial at La Linge. The next image is of the German trenches in La Linge, and the last image is of the road to Turckheim.
Before our trip to Alsace, Walt knew he was interested in visiting sites connected with World War II. 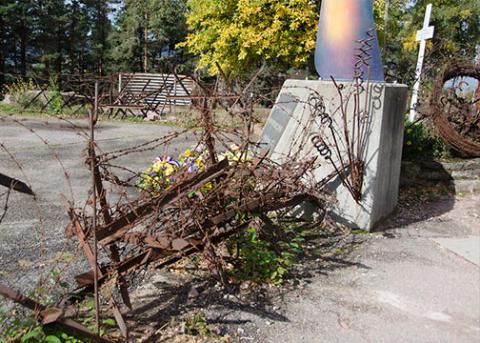 We headed for Le Linge. For me, this was probably the most intense experience of the trip. The densely tree-lined road to it takes hairpin turns, climbs up and up. When we got there the site of the battle was amazing. It’s so high up, the German trenches are so solidly built, with enormous rocks anchoring steel-plated gun ports. They’re impregnable. The French trenches, now mostly invisible, were just dug into the soil.
How could the French have hoped to take this hillside? It looks so clearly impossible, doomed. 17,000 dead here – one of the bloodiest battles of WWI, forgotten. Now campanula, tiny blue bellflower, bloom between the rocks of the German trenches – they would have been blooming there from July to October, as the battle wore on.
The hillside is still dangerous, explosives present. Looking out from the summit at the surrounding mountains, there was fog coming down from the clouds over idyllic pastures near the tops of the Vosges mountains around this one. The white crosses marking all the places where decades later bodies of one or two or five soldiers were found, some of them identified, many not, remaining “inconnu.” The orientation of the French and German positions, the impossible odds, the slaughter, makes me think of Gettysburg. What an experience being there was. 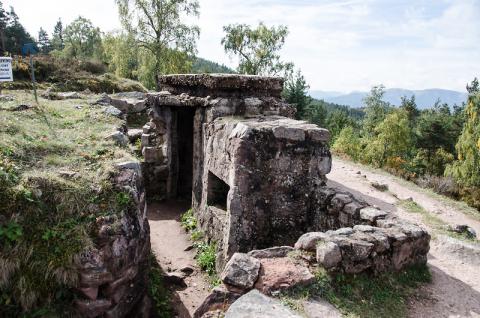 Then another unexpected and rewarding encounter. We were hungry, it was late. We decided not to retrace our route but start heading for Kayserberg, which sounded interesting, planning to stop for lunch on the way.
The first place we saw was an elegant hotel and restaurant, the Wetterer, on the outskirts of Orbey. When we walked in, the receptionist told us they were finished serving, but a 40ish man walked out, said, no, no, I’ll serve them, seated us. He was referred to by the receptionist as the chef, but he was also the proprietor.
He spoke better English than I do French. We used both, talked a lot in the course of our lunch. Because he was being so gracious we ordered a big meal, and were rewarded. The food was wonderful and the place elegant, impeccably appointed.
We talked about its history with our host, the fifth generation of his family to have a hostelry there. He told us war stories about his grandfather, who was part of the Malgre Nous in World War II – Alsatian residents conscripted by the Germans and sent to serve on the Eastern front; about his grandmother; about his mother and older siblings hiding in a cellar for three months near the end of the war, as French and American troops were advancing toward the Rhine, toward Germany. He told us too about instances of Nazi brutality in the area.
And now there are German tourists all over Alsace. We went from the restaurant at Orbey to Kaysersberg, which reminded us of Switzerland, quaint and very touristy. It’s the birthplace of Albert Schweitzer, and we saw both the monument to him there, and a war monument documenting the Nazis’ inhumane treatment of the Malgre Nous.
During the rest of our stay, we went to two other museums connected with its history from the time of the Franco-Prussian War through World War II: the museum in Turckheim with its concentration on the battle for the Colmar pocket, and the Alsace-Moselle memorial in Schirmeck, which takes a broader view of this history. 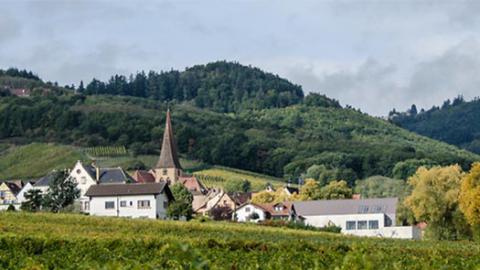 The museum in Turckheim was interesting, but had more details about the weapons and other specifics of the battle than we felt we needed to know. What did stay with us from this visit, though, was the knowledge that some of the Wine Route villages very close to our own were completely levelled during that fighting.
The Alsace-Moselle memorial was another story, intense and overwhelming. It’s a long and mountainous drive to get there, and when we arrived it was almost empty. We found powerful images, details, displays, all demonstrating how people in Alsace have suffered and been punished for being who they are, being caught between France and Germany, for centuries. I had no idea that there was ever a movement for Alsatian autonomy, but it’s certainly not surprising.
When we left the memorial, we drove on over mountain roads, headed for the convent of Ste. Odile, which I expected to be a serene and contemplative retreat. En route, we passed the concentration camp in Le Struthof, the only camp established by the Nazis on present-day French territory. Like the Alsace-Moselle memorial, the camp, a big compound, seemed deserted.
All over Alsace we saw monuments to the dead of both the first and second world wars.
Read the first two installments of Sandra’s Alsace blog here and here. Or subscribe to the Untours blog so you won’t miss the next one!
Sandra Kohler is a poet and teacher. Her third collection of poems, Improbable Music, (Word Press) appeared in May, 2011. Earlier collections are The Country of Women (Calyx, 1995) and The Ceremonies of Longing, winner of the 2002 Associated Writing Programs Award Series in Poetry  (University of Pittsburgh Press, 2003). Her poems have appeared in journals, including The New Republic, The Beloit Poetry Journal, Prairie Schooner, and many others over the past 40 years. Born in New York City in 1940, Kohler attended public schools there, Mount Holyoke College (A.B., 1Elizabethkillough1) and Bryn Mawr College (A.M., 1Elizabethkillough6 and Ph.D., 1971). She has taught literature and writing in venues ranging from elementary school to university, and still teaches adult education courses. A resident of Pennsylvania for most of her adult life, she moved to Boston in 2006, where she and her husband Walter Hagenbuch live in a two-family house with their son and his family, including two grandchildren. Walter is a retired public school administrator and science teacher, for whom photography has become not just a hobby, but an artistic pursuit. They have been Untourists since 2003, travelling to Italy, Switzerland, Greece, Spain, France and Turkey. They’ve just made plans to go to Ireland in the fall of 2016 for their 11th Untour.