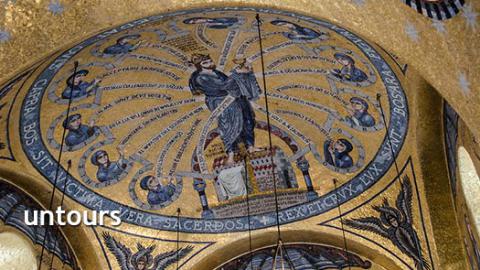 In the fourth and final installment of her series on Alsace, Sandra Kohler writes about Alsace’s history during the first and second world wars. She and her husband Walt (whose photos are featured here) have been on many Untours, but Alsace was an especially captivating region for them.
When I think back on our excursions to Breisach and Strasbourg, what is striking, and has become even more striking as we’ve reflected on this Untour, is the sense we are finally left with of Alsace being the heart of Europe.
It is mostly art that takes us on these two excursions, but what we find goes beyond what we expect. I write in my journal after the trip to Breisach:
Today we went to Germany. And how amazing that was – no border marking except a sign, less fuss than between one state and another in the States. France to Germany, no big deal – after how many hundreds of years of conflict?
The drive goes well, even negotiating roads around Colmar. Eventually we find ourselves crossing the Rhine, which is beautiful. And we’re in Germany. With just a sign to tell us that. We find our way to St. Stephen’s Cathedral. The 15th century murals by Martin Schongauer, which are what I wanted to see, are very faded, but one can tell they were lovely. 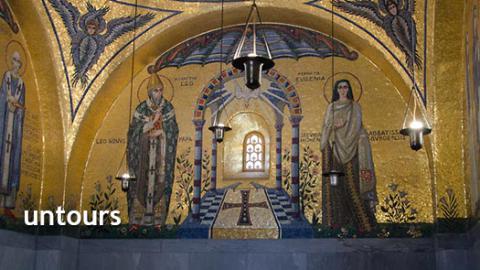 The church itself is austere, beautiful, with an amazing carved wooden altarpiece among other works of art. We’ve parked next to a cloister garden, which is open to the public, go back and eat our picnic lunch there after seeing the church, enjoying a wonderful view.
There are other historic buildings which we see, but what is most striking here, besides the wonderful murals, is the current ease of crossing the almost invisible border between those long term enemies, France and Germany.
One of our final excursions is Strasbourg, one of the two cities of the European Parliament, and home of the Council of Europe. We drive to Selestat and take the train from there to Strasbourg, a good way to get there, in part because the train, a local, is a commuter train for the whole string of small towns between the two cities. We’re among students and workers who commute to Strasbourg each day, giving us the sense of  “living like a local.”
Our day in Strasbourg just scratches the surface of what one can experience there, of course. It is somewhat hard on our bodies, because of all the walking on hard sidewalks, but very rewarding. Three things stand out: the Strasbourg cathedral, the sense of the city as capital of Europe, and one more of the trip’s chance encounters.
This one involves the extraordinary kindness of a middle-aged man, ethnically Middle Eastern but clearly westernized, accompanied by his young daughter, maybe 12, whom I ask for directions to the train station at the end of the day. He ends up shepherding us onto a tram (which he is also taking) which goes to the station, helps us get tickets for it, gets two young people to give us their seats on the crowded tram, even gets off at our stop with us briefly to point us to the correct escalator. It is the kind of meeting in which, after ten minutes’ time with someone, one wishes they could be a lifelong friend. 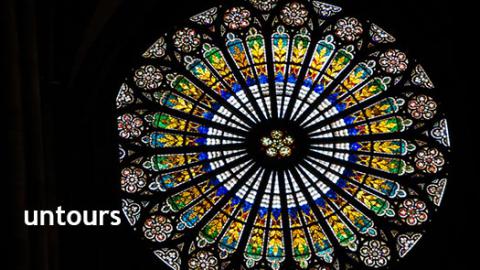 As to the Strasbourg cathedral, we get there just in time to see the daily astronomical clock show, which doesn’t seem particularly striking to us, though the clock itself is a marvel.
As is the thousand-year-old cathedral. It’s the kind of place that would take years of visits to explore properly and get to know. I content myself with walking around it, mostly trying to take in the stained glass, and buying postcards.
After the cathedral, we wander. We find wonderful stork T-shirts in the tourist office and buy them for our grandchildren. We take the Batorama boat tour of the city, which proves very much worth doing. The audio stream talks both about all that the Germans did in building the city during the period between the Franco-Prussian War and World War I (when Alsace was German territory), and then about the the Nazi brutality, the atrocities committed during the second world war.
There’s also commentary about the Protestant/Catholic mix of Strasbourg, and its religious and philosophical history. As we are learning in our course on the Reformation, Strasbourg was at the center of much of the ferment of that period. Walking around the city, we’re struck over and over by how cosmopolitan a mix it seems of people from all parts of the world. It’s full of tourists, of course, as full, say, as Venice. But it seems alive and powerful, a thoroughly appropriate city to be the capital of Europe.
In one of our conversations over dinner near the end of our stay, Walt says he feels more intimately connected to this place than he has on any other Untour. I can understand that. Though I have felt enormously drawn to other places we’ve gone, it seems to me that our Alsace Untour probably changed my sense of a world I thought I knew more dramatically than any other Untour we’ve taken.
Of course we missed many things we could have seen, of course there was much more we could have taken in. But this Untour was an extraordinarily rewarding one.
Read Sandra’s other Alsace posts on Alsace’s vineyards, intellectual and religious history, and memorials to the World Wars. 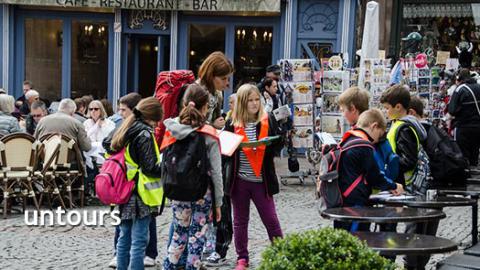 Sandra Kohler is a poet and teacher. Her third collection of poems, Improbable Music, (Word Press) appeared in May, 2011. Earlier collections are The Country of Women (Calyx, 1995) and The Ceremonies of Longing, winner of the 2002 Associated Writing Programs Award Series in Poetry  (University of Pittsburgh Press, 2003). Her poems have appeared in journals, including The New Republic, The Beloit Poetry Journal, Prairie Schooner, and many others over the past 40 years. Born in New York City in 1940, Kohler attended public schools there, Mount Holyoke College (A.B., 1Elizabethkillough1) and Bryn Mawr College (A.M., 1Elizabethkillough6 and Ph.D., 1971). She has taught literature and writing in venues ranging from elementary school to university, and still teaches adult education courses. A resident of Pennsylvania for most of her adult life, she moved to Boston in 2006, where she and her husband Walter Hagenbuch live in a two-family house with their son and his family, including two grandchildren. Walter is a retired public school administrator and science teacher, for whom photography has become not just a hobby, but an artistic pursuit. They have been Untourists since 2003, travelling to Italy, Switzerland, Greece, Spain, France and Turkey. They’ve just made plans to go to Ireland in the fall of 2016 for their 11th Untour.