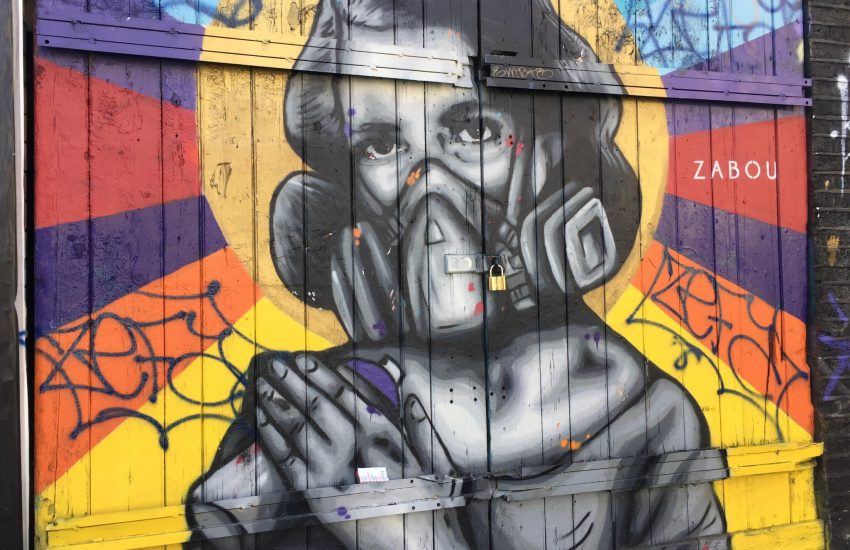 Art lovers flock to our London Untour, eager for time in some of the world’s most important museums. But the city offers an exciting open-air alternative for those who enjoy street life and contemporary art.

London’s trendy Shoreditch neighborhood is one of the most important global epicenters of street art. Artists from around the city and the globe come here to make a name for themselves with stencils, spray paint, paste ups, and even sculptures emerging from the bricks and cracked concrete of this colorful and rapidly gentrifying part of the East End. 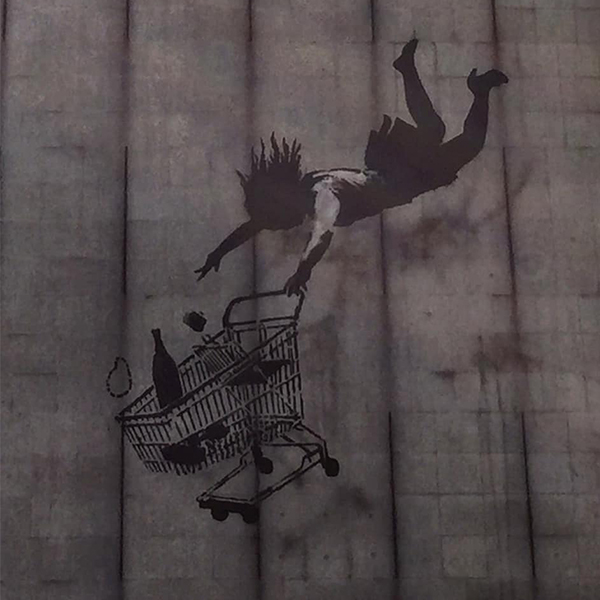 The scene has moved well beyond Banksy, the anonymous pioneer/rebel/celebrity of the movement, though you can still see a couple of his classic stenciled pieces protected behind plexiglass in the nightclub Cargo. (Watch Exit Through the Giftshop for a fun intro.) 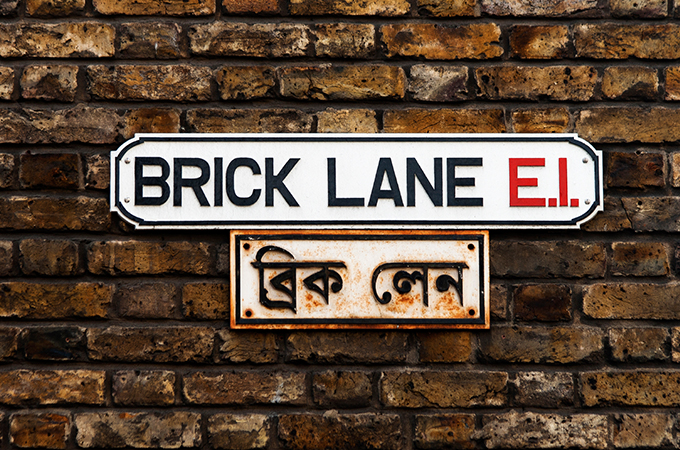 Brick Lane and the old Truman Brewery space are ground zero for viewing. No two walks down the street are the same, as new artists continue to emerge and literally paint over each others’ works. Photographing these ephemeral masterpieces for posterity has itself become an art.

Some pieces are posted or painted covertly, under cover of night. Others are sanctioned by shopkeepers. You’ll likely find more intricate pieces painted up high, where they are less vulnerable to other artists competing for space. Simple designs made by stencil and posters coated with wheat paste are done in layers on the lower spaces. 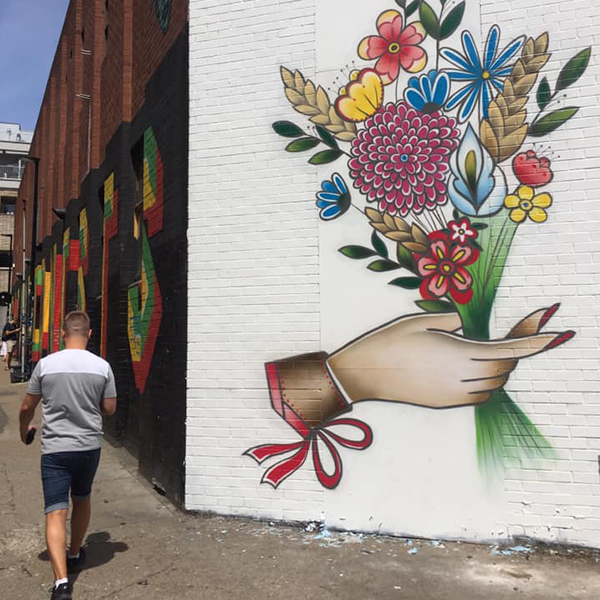 What was once a movement of renegades has turned into a lucrative art scene, with artists like Banksy commanding startling sums at auction and other big names exhibiting their work in galleries around the world. Where police used to crack down, now the artists of the street are tolerated.

Brick Lane runs through the heart of London’s Bengali community and remains one of the best places in London to get a curry. It is a fascinating crossroad of cultures (Indian and hipster) that mostly works. 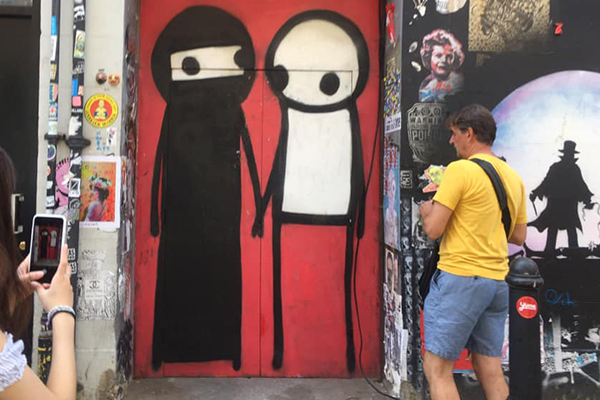 This simple red, white, and black image speaks to this bridging of cultures. The work is by Stik, a formerly homeless man who started painting to feel less invisible when he was living on the streets. Alongside the masters, this work consistently rates as one of the most beloved works of art by the people in the UK.

Like all street art, this one has been painted over again and again, but its design is simple enough that the artist can touch it up and does so regularly. There is respect among artists, but even the most famous of them must touch up their works. 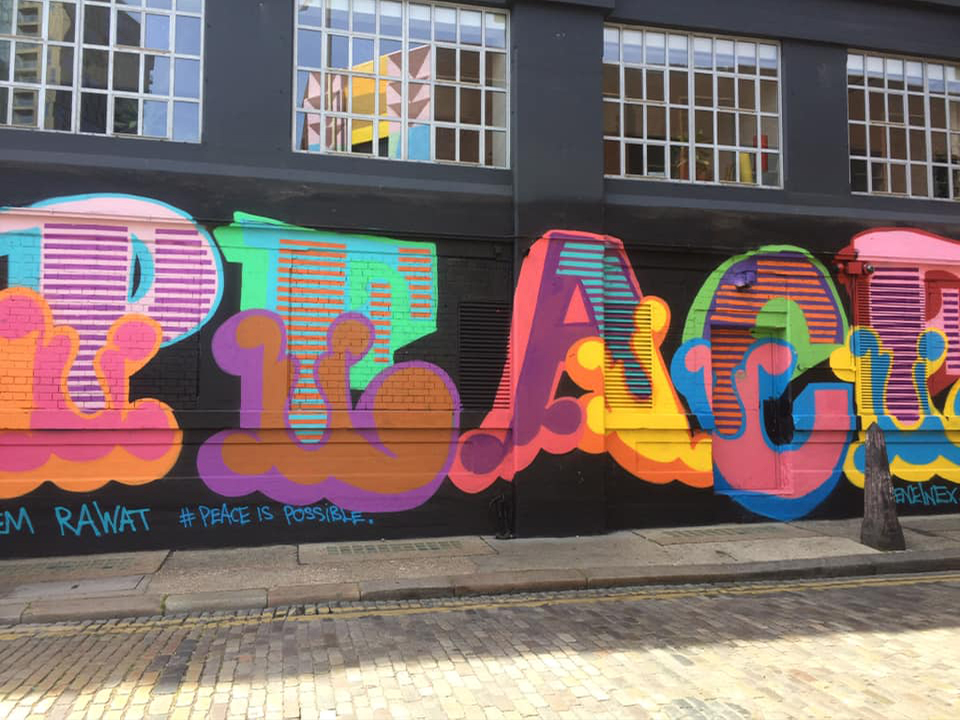 Ben Eine does touch ups. He’s another big name in the area, best known now for his circus letter font that spells out simple truths like “Peace is Possible.” When Barack Obama visited the UK, he was given a canvas by Ben Eine as a gift. Not bad for a reformed vandal first known for tagging buildings and tangling with the law. 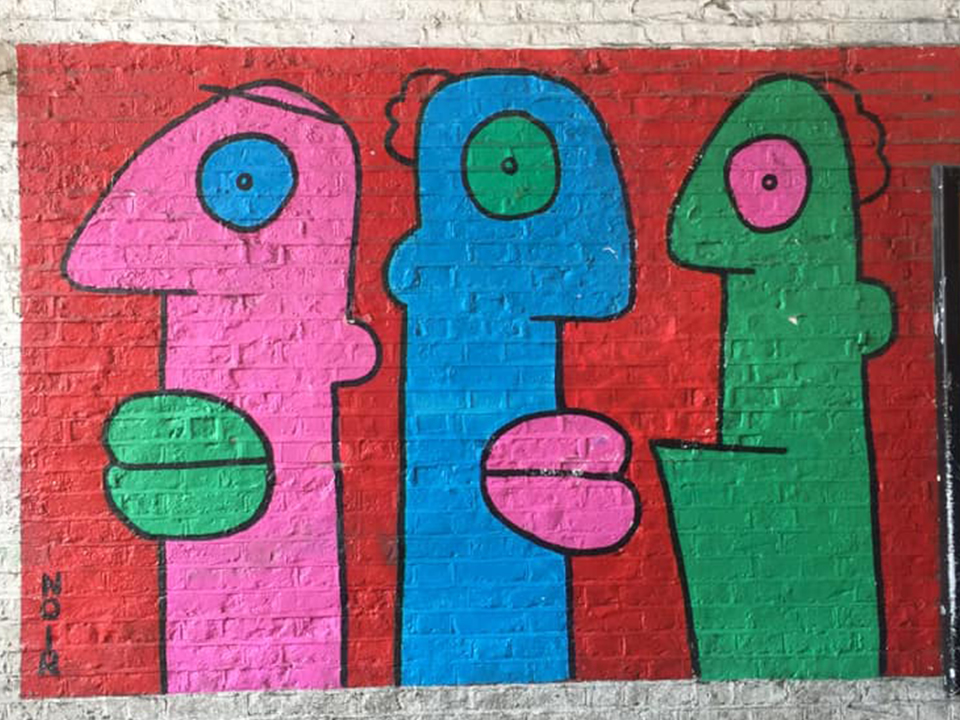 Look for Thierry Noir’s bright, colorful bubble-lipped cartoon people around the neighborhood. Legend has it that he was the first of many artists to paint the Berlin Wall. 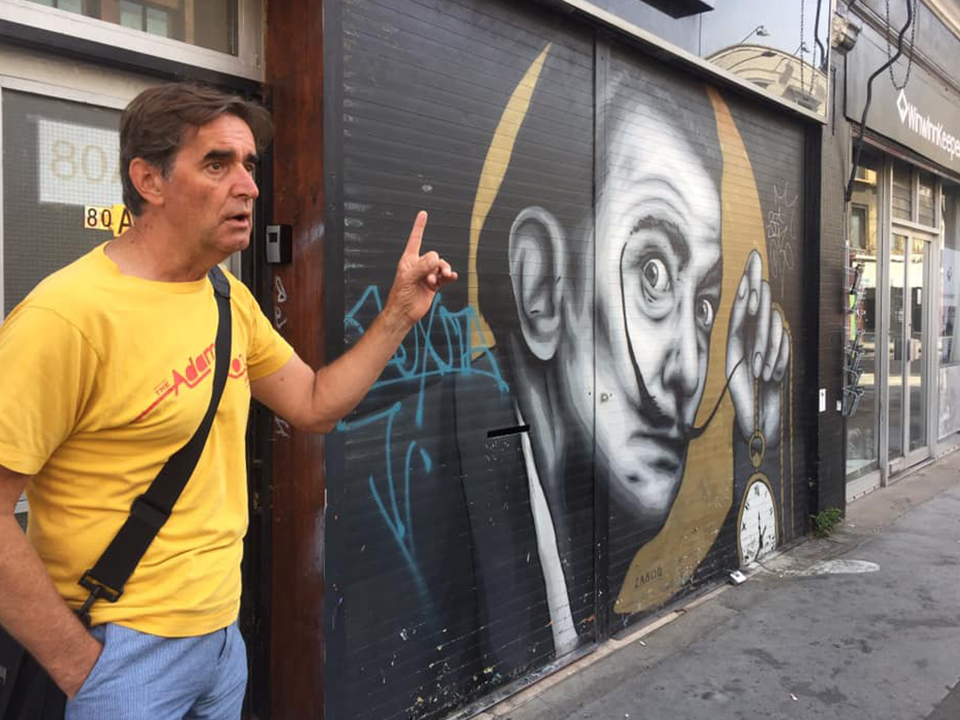 Zabou is very active in the area right now. She comes from France and is among a growing number of women in this international scene. Her vivid and perfectly executed portraits of notables like Salvador Dali, Malala Yousafzai, David Bowie, and Frida Kahlo stand out on the neighborhood’s crowded walls. 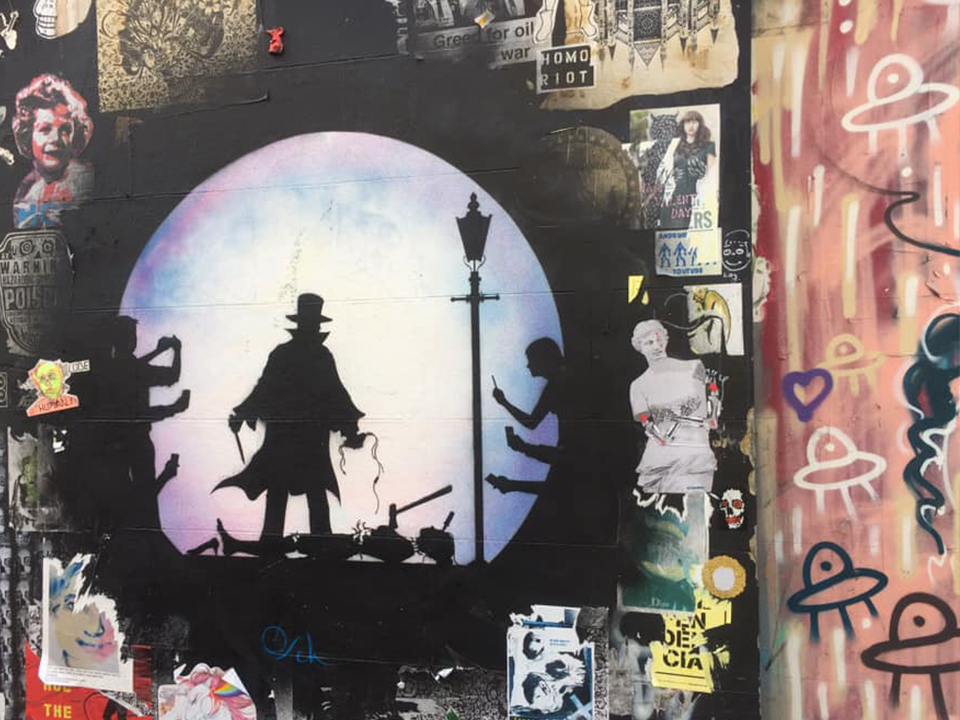 Otto Schade is another high profile artist who is well represented on the streets. Look for his colorful moonscapes on black, with black figures at center. He also creates figures painted to look like they are made of coiled ribbons. 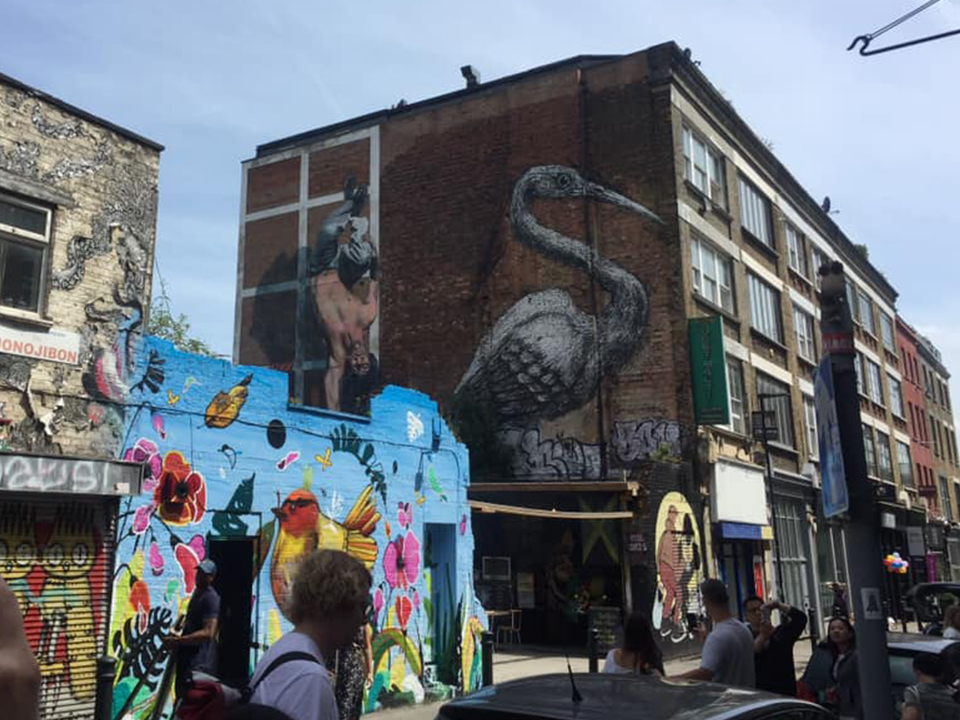 Other artists of note include ROA (look for the black and white crane), Invader (mosaic tiles that look like video game characters), and Shepard Fairey (you know, the guy who designed the Obama Hope poster). 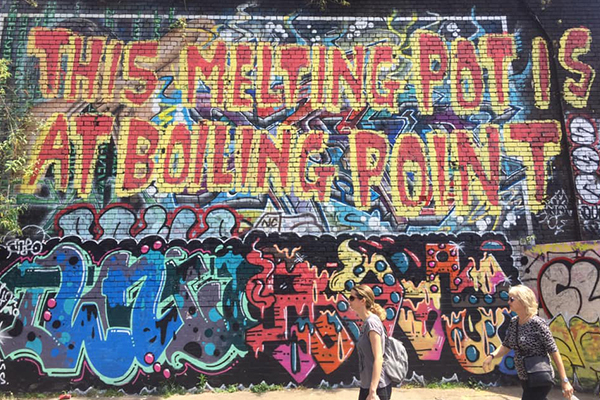 Pure Evil, a local artist, runs a gallery on Leonard Street. Where once there was a rebellious rejection of the pretensions of the gallery scene, some of the rising art stars have moved up from the streets. The scene is still organic and democratic, but street artists are establishing themselves and making a living. The scene has grown up.

You can take in a lot on a slow stroll through the neighborhood. You may even stumble upon artists at work as you pass through. This urban canvas of the streets is dynamic, changing every day. Take photos, and stay for lunch and some shopping on Brick Lane. 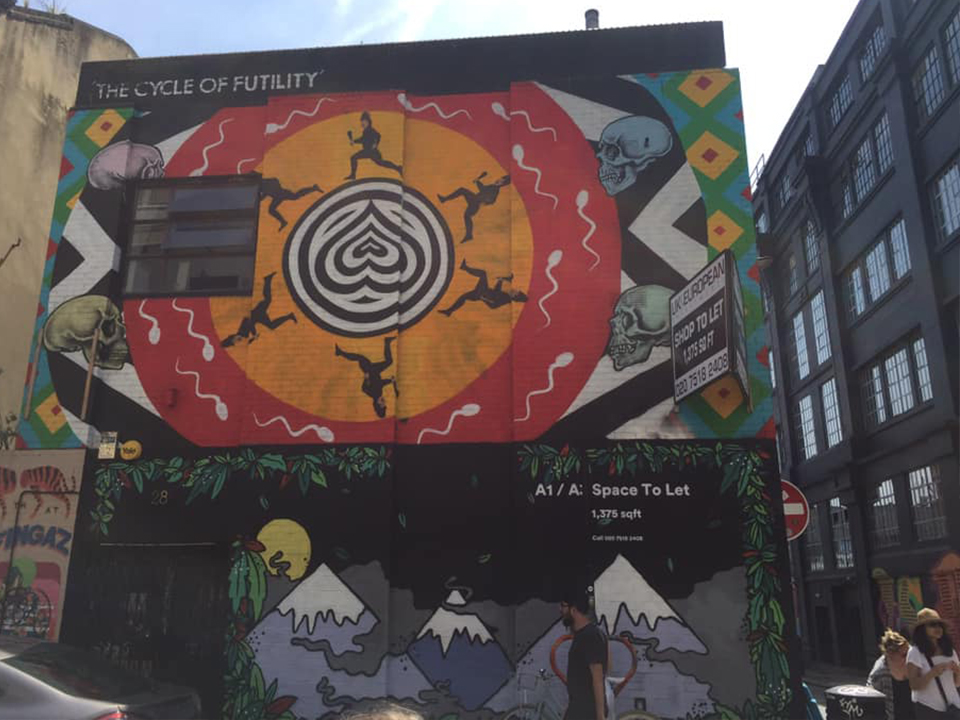 If you have more than a passing interest in street art, look for printable maps online just before you travel. Art geeks should reserve a spot on the Shoreditch Street Art Tour, an in-depth walk through the gritty corners of the neighborhood that includes deep background and up-to-date info on the current art on view.

London is an essential place to visit and revisit if you are an art lover. And the energy of the ever-changing canvas of street art is a great foil to the city’s very important art collections and regal museums. Consider taking a walk in Shoreditch on your next London Untour!