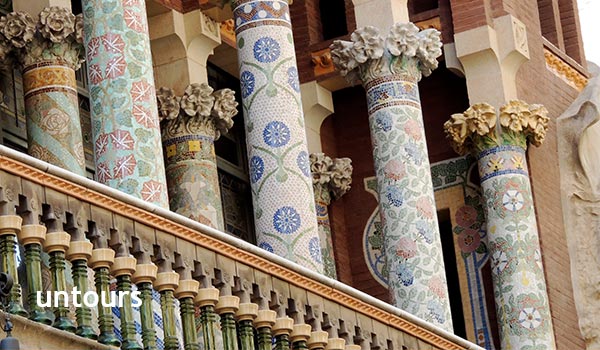 Ah Barcelona, such a dynamic, cosmopolitan city. However, it has not always been high on the traveler’s radar. Over the past 20 years or so, the city has had its own renaissance due largely to the 1992 Olympic games and is now full of life and things to do, see and, of course, eat. Below is a list of the top 11 that we find should not go missed.

1. La Sagrada Familia: In spite of the long lines and waits, this most famous building by Barcelona’s most famous Modernist architect (Antoni Gaudí) is quirky, whimsical and also breathtaking.

2. Palau de Música Catalana: Designed by another of Barcelona’s Modernist giants (Puig I Cadafalch), this UNESCO World Heritage Site is one of the city’s gems. See photo above.

4. A walk down las Ramblas: Popular but still worth it given the architecture, street performers, the Boqueria market (to stop in for a snack or beer).

5. Markets: Though the Boqueria is the most famous, Barcelona has many other covered markets worth visiting such as the Mercat Santa Caterina, the Mercat Sant Antoni and the Mercat de la Llibertat in Gràcia (see next).

6. Gràcia: this neighborhood, once a separate village outside the old city, is considered a favorite among Barcelona’s residents for it’s narrow streets, funky shops and all sorts of ethnic and local cuisine restaurants.

7. La Barceloneta (and Mediterranean): This sea-front  neighborhood offers strolls along the beach, seafood restaurants and still some vestiges of its fishing village past.

8. Park Guell by Antoni Gaudi: Another UNESCO World Heritage Site that was originally designed as a market for the area, but is not considered one of Gaudi’s top works.

9. Montjuic: It’s the big hill/mountain that looms over Barcelona; the national art gallery is there as is the Olympic stadium but, for modern art lovers, most importantly the Joan Miró Foundation (part of  the Articket museum pass included in the Untour package).

10. Montserrat: This other mountain, about an hour outside Barcelona, is a popular day trip with its impressive monastery and basilica.

11. The Barri Gòtic, or Gothic Quarter, is one of the oldest parts of the city. Here, travelers can explore the intricate architecture, narrow, winding streets and quaint nostalgia of medieval-era Barcelona, including the La Seu Cathedral and the neighboring El Born quarter, with the Picasso Museum and a great restaurant scene.

Our Barcelona vacation rentals are centered in some of the best neighborhoods, like the Eixample district. Have a great time in Barcelona!