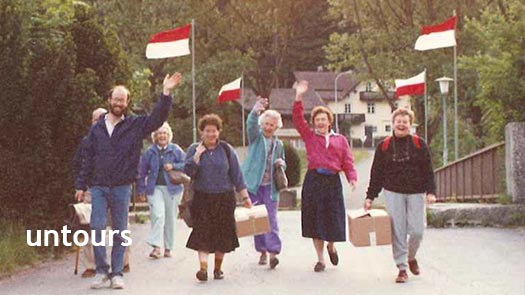 This piece originally ran in our Untours Quarterly newsletter. (You can sign up for all of our newsletters here.) We got a lot of interesting comments from readers. We’ve included the best of them at the bottom of my post. After watching my own daughter’s obsession with the film in the years since I lived in Austria, I’ve come to appreciate the movie in a new way.

In the mid 1980s I was in my 20s and working in Salzburg, on our newest Untour. I was taken with the gorgeous mountain scenery, the hearty local cuisine, and the quaint villages of Austria. But I’d never seen The Sound of Music.

I quickly realized that this was a gap in my knowledge when clients asked me where they could find the “Hills are Alive meadow” or the Von Trapp family palace. They would even ask to sing a song called Edelweiss at our farewell parties.

So, I asked my Austrian friends about the movie. Most hadn’t heard of it, but those who had wrinkled their noses and said it was Hollywood kitsch. They pointed out that its soundtrack had nothing to do with real Austrian music and that Americans must be very ignorant of geography.

When I asked what they meant, they cited the final moments of the film, when the family is desperately trying to get over the mountain from Salzburg to Switzerland. They are actually fleeing not toward Switzerland, but to Germany, in fact to Hitler’s mountain retreat.

That was enough for me. I did my best to answer client questions without actually seeing the movie.

One hot August day, I was walking in Salzburg near the Horse Fountain (shown during I Have Confidence in Me), and I saw a sign advertising showings of The Sound of Music in the local movie theater. I decided it was time to face the music.

I was stunned by the familiarity of the mountains and church towers in the opening credits. I even saw the church of my “home” village of Kuchl. It was hard to concentrate on the movie as I tried to figure out where the familiar locations were.

One scene was particularly interesting. As My Favorite Things played in the background, the family traipsed around Salzburg, took a mountain railway up the Schafberg (an hour east of Salzburg), then ended up in a meadow above Werfen (an hour south of Salzburg). One marathon day by a strict read of geography!

As the kids played ball and sprawled on picnic blankets, one of the girls asked Maria, “Can we do this every day?” Maria replied, “Don’t you think you’d get tired of it, Louisa?” I couldn’t help it. I laughed out loud. Heads turned toward me and I slumped down in my seat.

Perhaps the movie wasn’t so bad after all. It showcases Austria’s beauty and brings visitors who might have otherwise overlooked this country I adore. 50 years after its release, it remains a classic, beloved film. Who am I to argue?

It wasn’t long before the musicians who played traditional folk music at our farewell parties learned Edelweiss. We made sure to explain that the song wasn’t Austrian, but after a tasty wienerschnitzel and some crisp local white wine, the Austrians and Americans sang together with gusto.

Brian, this is the first time I’ve heard comments like this by someone who had NOT seen The Sound of Music. It never occurred to me that such people existed. Whether or not the geography is accurate, it does charmingly advertise the lovely Alpine mountains. – Bob Miller

The story I heard about the filming of The Sound of Music was in the scene at the festival when the audience sings along with Edelweiss that the director assumed that the Austrian extras in the audience knew the song. Of course they didn’t and had to be taught the song to finish the scene. I agree, Salzburg is a beautiful city and the surrounding area is stunning. Anyone who lives in a area that is used for a movie location knows the problem of geographic discontinuity. Fortunately, few people in the audience know. – Stan and Sandy Stone

Interesting comments on The Sound of Music. I saw it 50 years ago and even gave my folks tickets to it (seats were reserved) for their anniversary 25 years ago, we were fortunate to be there in Salzburg and went on a Sound of Music tour. The next day, we went to the Eagles Nest, which is close to Salzburg and even south of it, I believe. I didn’t notice the geographical nuances associated with the movie as most of the important landmarks were in and around Salzburg or not far away. I, for one, was well aware that Salzburg was not that close to Switzerland and just assumed they were escaping the Nazis over mountains regardless of the actual location, whether in still Austria, Germany, or whatever. And I let it go at that. So I was surprised to see the criticism regarding geography. At that point, the movie was probably long enough and being brought to a conclusion. The producers just wanted to promote the concept that they did actually escape and not otherwise get too technical about it. Just my observation. – R. Sease

The mountain meadow scene at the first was actually filmed in Germany! And the train they fled to actually ran right in front of their home! – J. Moody
(The opening scene was shot in Germany, but just over the border, and a lot of the featured views were into Austria. – Brian)

We have taken the Sound of Music tour and thought it was just great. Regardless of what Austrians think of The Sound of Music, it is an American classic and has given all of us a taste of Austria and has made Austria high on our bucket list. We are from Arizona where we have plenty of breathtaking scenery, but that tour around the Salzburg area took our breath away and left us speechless.  – MJ Kraus

It seems that people agree the Sound of Music tour is fantastic, and that the Salzburg area is a gorgeous place to visit!