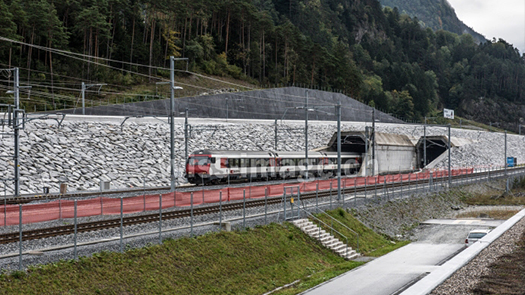 Swiss Untourists use their Swiss Travel Pass to zip all over the country by rail (and boat and bus), taking in the best of the Alps. Here is some news about a new option, the Gotthard Base Tunnel. It offers insight into the engineering brilliance of the Swiss.
Construction of the world’s longest train tunnel in Switzerland took 17 years. Traveling through it takes 17 minutes. The new Gotthard Base Tunnel is a project of pioneering proportions – a once-in-a-century structure extending for 57 kilometers (over 35 miles) through the Alps.
In December 2016 the two-way tunnel opened for service, taking north-south-north travelers far quicker and more comfortably through the mighty mountain massif. It reduces travel time on Europe’s most important north-south-north rail route by up to 40 minutes.

Boring and blasting on five fronts

Work of the tunnel started in Sedrun (Canton Graubünden) in 1999, when two 800-meter shafts were bored deep into the Alpine interior. Two further access shafts followed at Faido (Canton Ticino) and Amsteg (Canton Uri).
Together with the Gotthard north portal in Erstfeld and south portal in Bodio, they formed the five simultaneous starting points for construction of the longest train tunnel in the world. Excavation followed at all five sections, simultaneously and coordinated with pinpoint precision – which sped up construction time and reduced costs.
Up to four tunnel boring machines each 450 meters in length were in operation at any one time, penetrating the strata of rugged rock. Together they accounted for some 80 percent of the nearly 152 kilometers of excavation work. Only 20 percent of the total tunnel and gallery system were achieved by blasting. The tunnel teams worked through a total of 13 layers of rock, excavating more than 28 tons of material out of the mountain.

In harmony with nature

No less than 99 percent of the excavated material found sustainable re-use. A large quantity of the spoil has been used to make concrete for the inner lining of the tunnel, for renaturation of construction site surroundings and for island regeneration of the shallow water zone on Lake Uri.

The Gotthard Base Tunnel does not follow a perfectly straight line. It is curved due to geological factors and geographical criteria, such as the location of reservoirs and access routes to construction sites. With an altitude difference of only 148 metres between the north and south portals, the tunnel passes beneath the Alpine massif almost horizontally. Compared to train travel over the winding Gotthard mountain route with its 1400-metre altitude difference, the journey through the new Gotthard Base Tunnel saves not only time but also valuable energy resources.

On 15 October 2010 Switzerland celebrated the main breakthrough at the first of the two parallel tunnel tubes. The second followed five months later. By summer 2016 the entire facilities and operational technology had been installed.
In June the Alp Transit Gotthard company handed over the completed tunnel to the Swiss Federal Railways (SBB) – on time and on budget. As the focal point of the wider-ranging New Rail Link through the Alps (NRLA), the Gotthard Base Tunnel will play an essential role in facilitating goods and passenger transport far into the future. The tunnel has been conceived and constructed to eliminate the need for major maintenance during its predicted lifespan of at least 100 years.

From the tunnel’s opening, train travel on the north-south axis will be much faster and more frequent. The number of trains travelling between German-language Switzerland in the north and Italian-language Switzerland in the south will increase by a quarter.
The new tunnel will also permit longer trains than those on the old mountain route with its 1400-meter difference in Alpine altitude. Passenger carrying capacity on the north-south axis will rise dramatically.
This is attributable also to the opening in 2020 of the Ceneri Base Tunnel south of the Gotthard Base Tunnel. Passengers will then save a further 30 minutes in travel time. The journey from Lugano to Luzern will take only 1 hour 47 minutes; and from Milan (Italy) to Zurich only 2 hours 58 minutes – more than an hour faster than today’s travel time.
Shorter travel times mean that Swiss Untourists and other Swiss Travel Pass holders will have more opportunity to discover the many delights of their destinations north or south of the Gotthard.
Get out on the rails on a Swiss Untour, which includes a Swiss Travel Pass for rail travel, and enjoy!