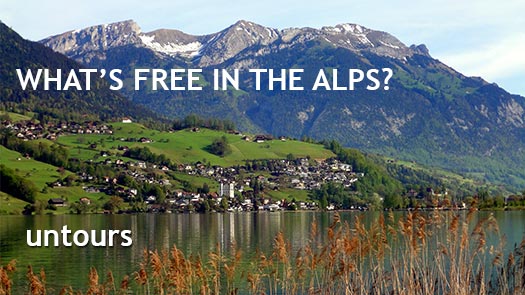 Switzerland has always had a reputation for being expensive, but it isn’t universally true! Staying in an Untour apartment and living like a local will show you that Switzerland is affordable and family friendly. So why the reputation? Could it be Switzerland’s international association with luxury goods that fuels the myth? (Think chocolate, fine watches and high profile ski slopes.) Or its independent economy and currency, whose rise and fall is unlinked to the euro?
At the beginning of 2015, currency fluctuations made Switzerland look like it would spike in price, but the markets have settled since, and at present, Switzerland is on track to actually be a little less expensive than last year.
It’s almost a 3-for-1 deal, when you think about the different languages and cultures in this small, culturally rich country. Add to that the fact that so many of Switzerland’s best sights and activities are free, and you really should consider a Swiss vacation! Here are some of our favorite Swiss freebies.
What’s free in Switzerland?
1. The views
The single biggest reason to visit Switzerland is the view. Take in all that Alpine beauty and rural charm complete with cows grazing in meadows and old picturesque chalets. The views cost you nothing.
2. Hiking
The possibilities are endless, from easy strolls through flower-filled meadows to more challenging climbs over mountain passes, there are impressive walks for all levels of fitness. And the trails are so wonderfully well marked, it is hikers’ paradise.
3. Swimming
Switzerland has some of the planet’s cleanest lakes for swimming in. Fed by glaciers and mountain streams, the ethereal blue of its lakes is catnip for swimmers.
4. Festivals
Rural Switzerland is a hotbed of tradition, and its festivals draw locals and visitors, with dancing, sports and the low rumble of alpenhorns.
5. Villages and towns
Explore Switzerland’s beautiful villages and town centers. Untouched by the world wars, the prettiest Swiss towns are perfectly preserved medieval villages.
6. Mineral water
Check out the fountains flowing in most major towns. Free drinking water, straight from the Alps! Fill your bottles for the hike.
7. Traditions, like bringing the cows home
Easiest to let our Swiss staff coordinator Richard explain…

In spring, as soon as the snow melt allows, 70% of cattle are still walked by the farmers, up to the higher pastures of the mountains with traditional bells and flower garlands around their necks. The farmers then live for the summer in a sort of back-to-basics life, looking after the cows and their calves. Then in the fall it all goes the other way, the migration back down to the lowland pastures is another well known tradition over here.

Processions of herds of cows come back down to take shelter at the lowland farms. Not just this but half the village turns out to cheer and support the farmers and their herds. I know this because I have lived 8 years, half way up a mountain on the way to Griesalp. Every thing stops on the route; the people come out from the houses, even the kids are allowed out to the playground to watch the spectacle.

What’s free with the Swiss Travel Pass? (This rail pass is included with all Swiss Untour packages.)
As Richard tells it, “The public transport network allows such easy access to all parts of Switzerland with connections to all major and minor towns, be it by train, bus or boat. It’s all there in one system with the Swiss Pass! The trains run like clockwork. OK, some are slow local trains but the main line trains are now so fast and 99% on time.” The pass includes:
Plus entrance to over 480 museums! Our favorites include:
No time like now to start planning your Swiss vacation and looking at Swiss Untour apartments in the heart of the local culture!