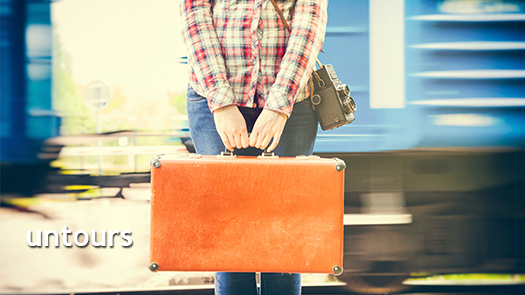 Years before our big presence on Facebook and other social media, we set up an email listserv for travelers called Idyllchat. It became a community of friends who shared a love of travel, many of them Untourists, sharing advice on Untours and lots of other travel options. It continues today and has had a flutter of activity and posts recently, as old friends unite and exchange views on all sorts of topics.

One of the most popular and timely conversations has revolved around the recent terrorist attacks in Paris and Brussels and the safety of travel in these uncertain times. For those of you who are not part of the listserv, here are some highlights from the conversation.

Is everyone being scared out of traveling abroad this year?  – Charlotte
My wife and I intend to keep traveling. We were in England and Wales last October, and I’m writing this from New Zealand. If we are scared to live our lives, then the terrorists have already won.  – Jay
I agree. I was roundly criticized for not forbidding my daughter to go ahead with a planned trip to Europe in September 2016. She is an adult and I expect her to check with the State Dept. advisories and keep up with the news. I also expect her to be vigilant and careful while there.
That said, I agree with Jay. Travel has made the world our neighbors. The Brussels attack was personal because I had walked the streets, shared meals there, flown out of that airport. We cannot allow terrorists to force us back toward isolationism. We all ride this plane through space and draw our life from it. It needs a global family to survive in the long run. Americans bring tourism dollars to other countries that lift many people out of the poverty and isolation that feeds terrorism.  – Elaine
I’m not afraid to travel because of terrorists. What scares me anymore is driving on a crowded freeway, seeing many drivers texting, talking on their phones and swerving into other lanes because of it! That said, I’m not sorry we have planned for quite awhile to go to Nova Scotia and New Brunswick this fall. We are taking advantage of the favorable Canadian exchange rate while it remains so!  – Carol
I would go tomorrow… When it is your time to go you can drop dead taking out the garbage. I went on many Untours and to other countries so I love to travel. However at 89 years and recovering from hip replacement surgery I can only wish. The head says GO but the body says NO. But I haven’t given up taking a trip by any means.  – Jere
Michelle and Jere got me to thinking about traveling during these times when terrorist attacks can happen anytime, anywhere.
Don’t let the bad guys win by staying home. How sad it would be if you passed up a trip to some great destination, only to step off a curb here in Podunk City, USA, and get run over by a pickup truck being driven by some drunk.
Jane and I traveled to Paris about a week after the 9/11 attacks on the World Trade Center twin towers. The flight over to Europe was about half full, and barely more than half full on our return flight 2 weeks later. Everywhere we went, people came up to us and said, “Oh, you’re Americans.  We are so sorry for your people…and we are so pleased that you are here. Thank you for coming.”
Had we cancelled that trip, we would have missed out on a once-in-a-lifetime experience: The beautiful city of Paris, the welcoming people of Paris, and virtually no tourists.
Some people may think they will be safe by staying here in America and avoiding travel to foreign countries. HA!  Here we have more guns than we have people, and 11 million more guns are sold here every year.  Australia officially warns its citizens about traveling to the US because of the possibility of getting shot. Traffic accidents kill hundreds of people every day. Check your local newspaper to see what I mean. In short, there is no guarantee that you will be safe here, or anywhere.
Last, we all have to realize that our lives will come to an end someday, somehow. Would you rather come to the end of the road and say, “I sure had a wonderful life. I got to travel to London, Paris, Switzerland, Germany, Spain, and Italy.” Or, will you say, “I’ve lived a long life, but I really regret not going to Venice. I always wanted to see Venice, but I was afraid to travel.”
TRAVEL NOW!!! You won’t be any younger tomorrow…or any safer in the US. – Phil
Hurrah! Old friends are back. Glad to see everyone is resolved to travel, whether in person or in the armchair.
…Terrorism will not win. Cowards do not win. It only toughens our resolve to travel as much as we can. Our hearts break when we see the cities we love attacked so brutally.
Let’s resolve to share ideas and thoughts in the coming months.  – Joan
Well said everyone, and welcome back Idyllchat. I went to Tanzania right after the embassy bombing by terrorists and the awful Brussels attacks won’t prevent me from going back there or almost anywhere for that matter. They can attack anywhere including where I live so continuing to see the world and its people is still high on my list. – Lyn
Conversation has turned back to many other things: What to see Paris, river cruise options, young people and travel. It’s been fun to read. Sign up for Idyllchat here.
You might also enjoy Kim’s blog post on traveling in Paris just after the November attacks there.